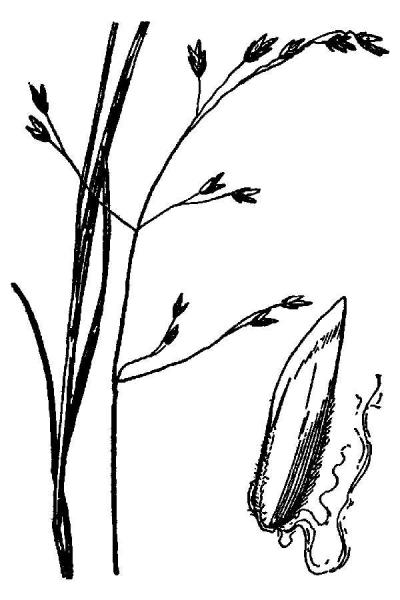 Despite its broad distribution, this grass is considered globally rare since so few populations are known. The epithet paludigena refers to its habitat preference as it means "born of the marsh."

There are five known populations and 13 historical populations. All of these known populations are quite small and in wetland habitats that may be susceptible to run-off or invasive species. With a somewhat specific habitat type (open to slightly wooded calcareous wetlands), there is a limited amount of available habitat. This plant has likely always been rare in New York.

All of our extant occurrences have only been surveyed once so there is no data on their trend over the last 30 years. They seem to be in relatively stable envirionments so we would not expect large fluctuations over time.

This grass has never been common in the state with only thirteen occurrences known. However, many of the historical localities have been searched and less than fifty percent of these populations have been relocated. This decline in known populations has been caused in part by habitat destruction of supporting wetlands but other factors may be responsible such as changes in water regimes and difficulty in surveying and recognizing this plant.

This plant is likely susceptible to natural succession (i.e. open to slightly wooded wetlands naturally progressing to shrub-dominated wetlands with little sunlight reaching the ground layer). Changes in the surrounding landscape that might affect the hydrology of these sites, and thereby impact populations of this grass.

Experiments could be done to study its response to light and succession. Knowing how long this species survives witin the seed bank may allow for easier management and ease concern about changing habitats.

Most of our populations are within or near the Cayuga Lake basin. There are a few scattered populations elsewhere ranging from Albany to the Black River Valley and the Lake Ontario lakeplain. This grass is easily overlooked and is likely present at more sites than currently reported. New York is at the northeastern edge of its range.

This grass is found in widely scattered wetlands from New York, Pennsylvania, Virginia, and North Carolina west to Minnesota and Iowa.

Poa paludigena is a very slender, weak-stemmed plant with an open inflorescence containing few flowers. It can be found as one plant or in small tufts that grow from one half to two feet tall. There are only 2-3 short slender leaves with boat-shaped tips. The branches in the inflorescence are mostly in groups of one or two or rarely three. Three veins are visible on the lemmas and these have small hairs along the base.

The culms of this grass are either solitary or in very small tufts; they are not rhizomatous. These slender and weak culms may reach 60 cm tall. The leaves are 0.25-3 mm broad, and there are usually only 2 or 3 stem leaves. The ligules are short, 0.5-1.5 mm long, and truncate. The panicle is 3-13 cm long and the branches are mostly in 1's or 2's. The glumes are about 2 mm long. The lemmas are 2.5-3.5 mm long, scarcely webbed at base, with marginal nerves. The keel is pilose at base. The intermediate nerves of the lemma are obscure and glabrous, thereby appearing 3-veined.

Poa sylvestris, Poa palustris, and Poa nemoralis are similar in appearance to Poa paludigena but they have more stem leaves and their inflorescence branches are in groups of 3-5.

Mature fruits from this grass may be found from early until late summer. Surveys should be conducted only when mature fruits may be collected.

The time of year you would expect to find Slender Marsh Blue Grass fruiting in New York.