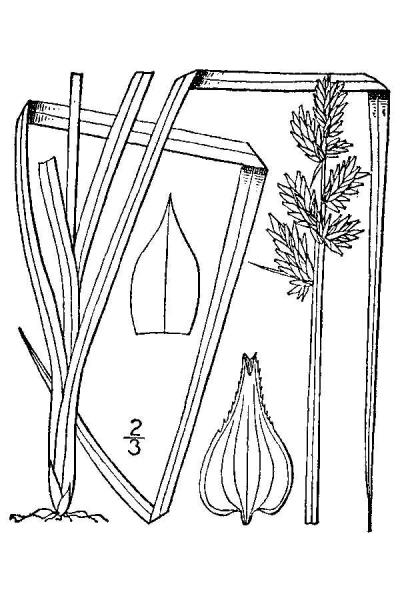 All but one population of Carex conjuncta have not been seen in NY in over 100 years (one population is known from 1934). Due to this species' similarity to a few others, it may simply be being overlooked. Until all historic populations are surveyed this species will be considered historical, as opposed to extirpated, in NY.

There are no known populations today but as many as ten historical locations. These sites are situated near steams or waterfalls, in wet swales, or on the back side of marshes. Some of the historical locations have good directions, so these should be sought out.

No populations have been seen in over 70 years (but survey work to these historical locations has yet to be conducted). So, short term trends are unknown.

Voucher specimens need to be verified. Also, survey work to historical locales needs to be conducted.

Carex conjuncta occurs in the Mohawk and Hudson Valleys. There is also a specimen collected from Chemung County in south-central New York.

Carex conjuncta is a tufted, perennial, grass-like plant. It has leaves that are up to 8 mm wide. Stems arise from the leaves at the base of the plant and are relatively wide (to 3.5 mm wide) and up to 80 cm tall. At the top of the stems are numerous short flowering/fruiting branches which together from a dense 3-7 cm long cylindrical inflorescence. The fruits (perigynia) are green and up to 4.5 mm long (Standley 2002).

Carex conjuncta is a cespitose perennial. It has long leaves (to 75 cm long) that are about the same length as the culms. Adaxial (front) surfaces of leaf sheaths are hyaline, colorless, rugose, and convex. The inflorescences are 3-7 cm long and to 2 cm wide and are composed of many densely flowered short branches. Perigynia are prominently 3-5 veined abaxially, veinless adaxially, and to 4.5 mm long. The perigynia are not distended below by a spongy layer but instead have spongy tissue on either side of the achenes (Standley 2002).

Identification is easiest when this species has immature to mature perigynia which are not yet shedding heavily. Intact lower leaf sheaths are useful for identification purposes.

Carex laevivaginata and C. stipata superficially resemble C. conjuncta. The former two species have perigynia that are distended at the base. In addition, C. stipata often has a longer inflorescence (5-10 mm long) and C. laevivaginata has a non-rugose, truncate, and apically thickened adaxial leaf sheath.

Plants fruit from early June through at least mid July. Therefore, surveys are most effective during this time period.

The time of year you would expect to find Soft Fox Sedge fruiting in New York.