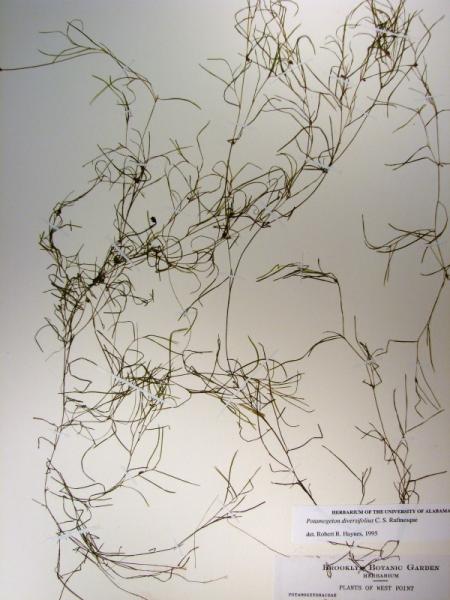 The specific epithet diversifolius means diverse leaved (Fernald 1970). This is probably in reference to the differences in the submersed and floating leaves although, this character is shared by many other pondweed species.

There are 7 known extant populations and about 19 populations which have not been seen in recent years and are considered historical. Many of the specimens documenting these populations may be misidentified as this species has clearly been misunderstood in the past. This species is at the northern edge of its range in New York and many of its historical locations have probably been destroyed in the urbanized area of New York City.

All seven known extant populations were first documented within the past 25 years. It is unclear if these are new populations or simply have been overlooked in the past. Overall, short term trends are not clear.

There are about 19 populations which have not been seen in recent years and are considered historical. The number of populations is not exactly clear as many specimens are probably misidentified given the complex taxonomic history of this species. Many of the historical populations occurred within what is now the urbanized region of New York City. These population have likely become extirpated. The other historical populations may still be extant but they simply have not been searched for. There are seven known extant populations which were first documented within the past 25 years. It is unknown if these are truly new populations or were simply overlooked in the past. Overall, long term trends are not clear but probably indicate at least a slight decline.

Currently there are no known threats to this species.

Many specimens documenting populations have not been annotated recently and need to be verified. Historical populations need to be surveyed to determine if these populations are still extant.

In New York, this species primarily occurs in ponds (including dammed ponds) usually on the margins where the water is shallow and in deep emergent marshes. Some of the populations occur in areas with dense aquatic vegetation. It also is known from ditches (New York Natural Heritage Program 2008). Ponds, lakes, streams, and rivers (Haynes and Hellquist 2000).

This species is mostly restricted to southeastern New York with perhaps some populations in western New York. The specimens representing some of these populations as well as others that have been annotated as P. diversifolius from other parts of the state are most likely misidentified and need to be verified before a full picture of this species range in New York can be ascertained (New York Natural Heritage Program 2008).

This species is a wide ranging taxon south and west of New York. It occurs from Connnecticut and New York south to Florida and west to Minnesota, Oregon and California. It is also known from Mexico (Reznicek and Babbette 1976, Haynes and Hellquist 2000).

This species is a submerged, or sometimes floating-leaved, aquatic plant. It has rhizomes and the main stems are up to 35 cm long. It has narrow, linear, submerged leaves scattered along the stems and sometimes the upper ones have dilated leaf blades which float on the surface of the water. The flowers occur in clusters on stalks from the axils of the leaves and sometimes from the end of the stem. These flowers mature to small rounded fruits with three narrow ridges or wings (Haynes and Hellquist 2000).

Mature fruits are a help in identifying this species and while not completely necessary for an accurate identification they are extremely useful. Well prepared and complete specimens are extremely important for identification. In particular, full leaves that have not been broken, so their length can be assessed, are important. Specimens should be prepared by putting floating plants onto a sheet of heavy paper.

All leaf measurement listed below should be done on mature leaves from the middle of the stems. Leaves that are dilated or show a transition towards dilation (even slightly) should be avoided. Also, leaves from seedling plants and from late season shoots that proliferate from the axils should be avoided. In addition, submersed leaf characters are less useful in plants from flowing water habitat.

Fruits are produced from August through September. Therefore, the best time to survey for this species is during this time period.

The time of year you would expect to find Southern Snailseed Pondweed vegetative and fruiting in New York. 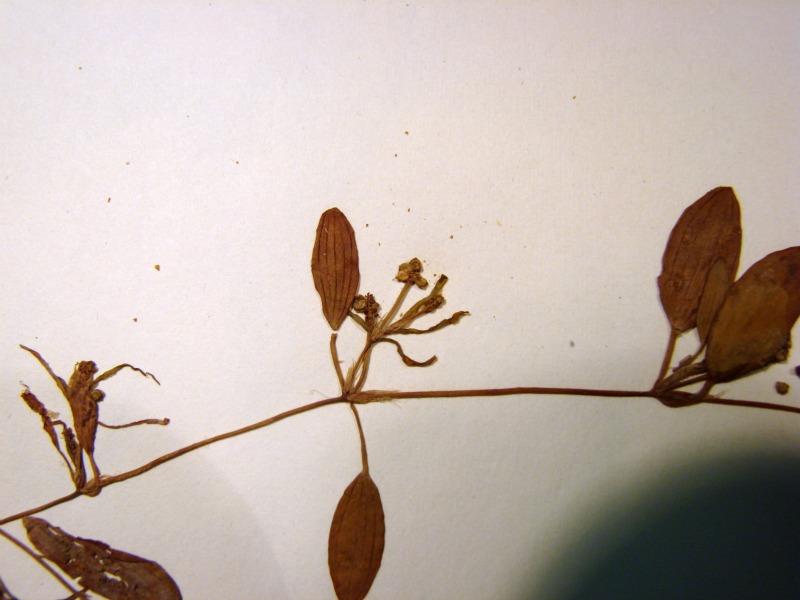 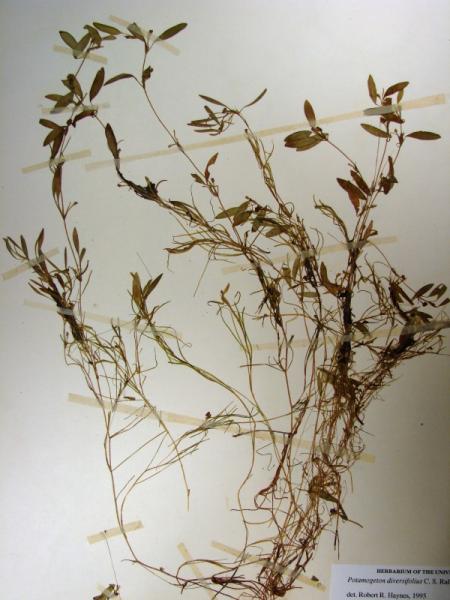 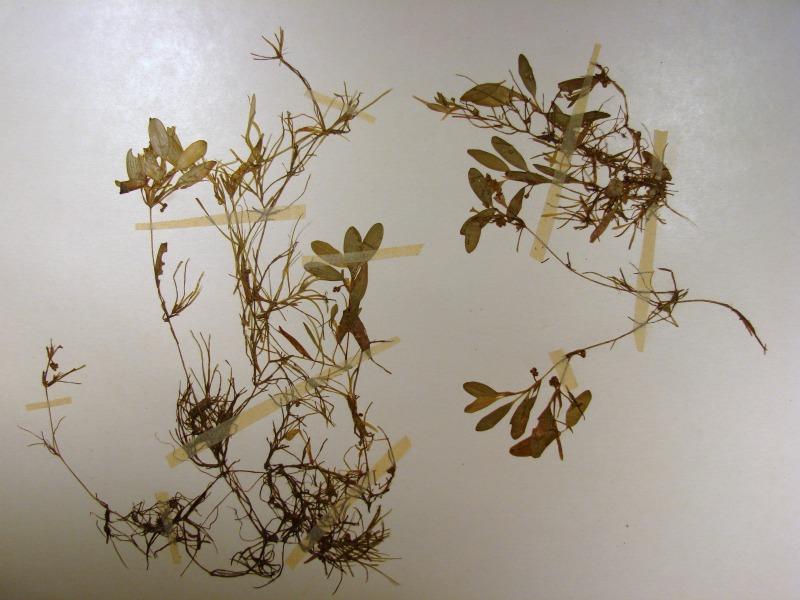 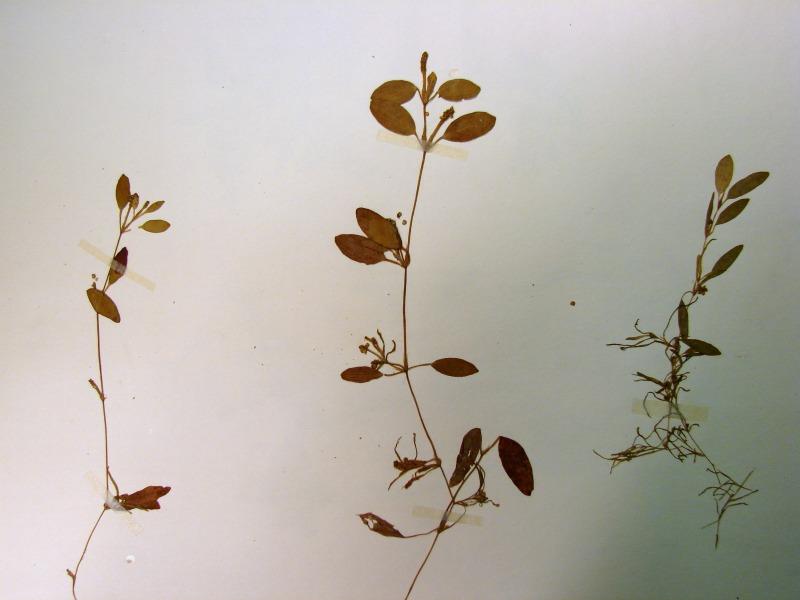 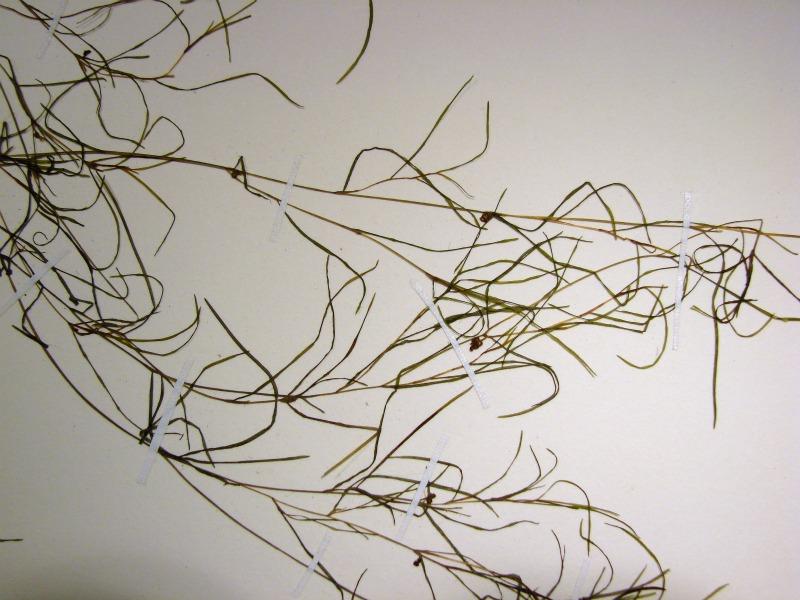 Fernald, M.L. 1932. The linear-leaved North American species of Potamogeton section Axillaries. Memoirs of the American Academy of Arts and Sciences17: 1-183.