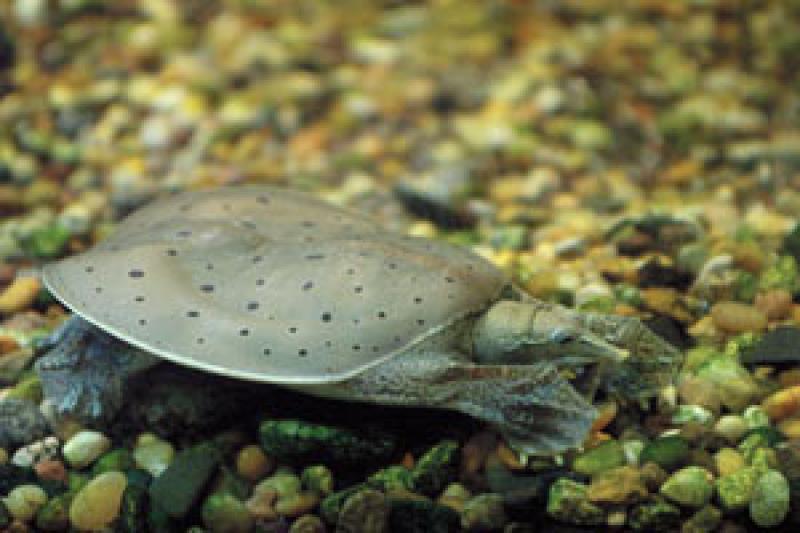 Spiny softshells are able to breathe while underwater, allowing them to spend extended periods of time underwater. They can exchange oxygen and carbon dioxide directly through their skin, especially through membranes that line their throat and cloaca, while in water.

These turtles are known from some western counties and a disjunct population in eastern New York. Several known populations are small and seem to be in decline, and populations are under pressure from shoreline development, human disturbance, and invasive species.

To date, this species has been documented at twenty sites in New York, and spiny softshells continue to be documented at new locations in the state. Since 2000, individuals have been sighted at fifteen of the twenty known sites. At one site, biologists have not observed individuals during multiple surveys in recent years. That population seems to be in decline, and it may already be extirpated or on its way to extirpation.
Four of the twenty known sites have not had turtles sighted in recent years. Shoreline development, disturbance of basking and nesting areas, as well as invasive species spread, has led to a reduction in habitat, and many areas have high rates of nest predation.

The long-term trends are not known for New York. There is evidence that this species could be declining in at least parts of its range.

Threats include collection for food markets, development (Gibbs et al. 2007), and invasive species. These turtles are highly aquatic and can breathe underwater, and so they are highly affected by water pollution. Human recreation is also a threat to softshell populations due to collision with boats and getting hooked on fishing lines (Galois et al. 2002). Mechanical weed harvesters have been found to threaten populations, since softshell turtles use aquatic weed mats for feeding and basking. Potentially, a lack of high quality, undisturbed nesting and basking habitats negatively impact populations.

There are several conservation strategies that could accomplish better protection and outcomes for spiny softshell populations. Avoid or minimize impediments to turtle movements; impediments may be caused by dams, habitat alterations, or human activities (Galois et al. 2002). These impediments may limit the turtles' access to suitable feeding, nesting, or hibernating sites, and they can isolate populations from one another. Maintain river buffers to prevent runoff of harmful chemicals into the water, and additionally minimize all river pollution sources (Mitchell et al. 2006). Snags in the water should only be removed when necessary for boat traffic, since these are important shelter and basking habitats (Mitchell et al. 2006). Ensure that suitable nesting areas (gravel bars) are identified and managed and/or protected from disturbances. Researchers in New York had success with fencing off a nesting area to keep out people, vehicles and predators, and then placing plastic netting over the nesting site during hatching. These measures allowed the nests to safely incubate and hatch, and protected hatchlings from predators until they could reach the water (Gibbs et al. 2007). Invasive species should be removed, especially from the shoreline. It may be beneficial to have a speed limit in some areas near shore and protect a no wake zone.

Spiny softshells have been reported from several western New York counties and also a disjunct site in the Albany area. Although the turtles are found on the Vermont side of Lake Champlain, there are not yet any records from the New York side of the lake.

The range of the spiny softshell extends from Montana to southern Quebec, south to northern Mexico and the Florida panhandle. Disjunct populations exist in several areas around the periphery of the range. This turtle has been introduced in the Colorado-Gila river system and in New Jersey. It is also introduced and established in southeastern Virginia (Mitchell and Southwick, 1993, Brimleyana 18:99-102).

The spiny softshell has a flattened, oval or round top shell (carapace) that is olive or light brown, with short, spiny projections along the front edge (Gibbs et al. 2007). Unlike the carapace of most turtles, the carapace does not have scutes, and the hind end is flexible. This turtle has a long neck, and its snout resembles a snorkel. Males and juveniles have black dots and eye spots on the carapace, with a black line along the margin of the back half of the carapace. Females have a gray to brown mottled or blotched pattern on the carapace. Most turtles have two black-edged yellow stripes on each side of the head. The feet are fully webbed, and mottled or streaked with black and yellow. Males are smaller than females and have a long, thick tail, while females have a short tail that is often tucked under the edge of the carapace.

The flattened, leathery carapace and snorkel-like snout are the characters most useful for identification.

This turtle is easy to identify in all life stages from hatchling to adult.

This turtle is quick to defend itself, making it difficult to handle safely. Turtles are quick to bite and scratch, and bites from larger individuals can be very painful.

This species usually becomes active in April. During fair weather in late spring and summer, turtles bask on steep embankments, sand bars, or floating logs. Winter is spent hibernating in soft mud on the bottom. Females nest in June or early July, often swimming long distances to favored open nesting sites such as sand bars or gravel banks close to water. Hatching occurs in late summer, but the young may overwinter in the nest and emerge the following spring (Gibbs et al. 2007).

The time of year you would expect to find Spiny Softshell present and reproducing in New York. 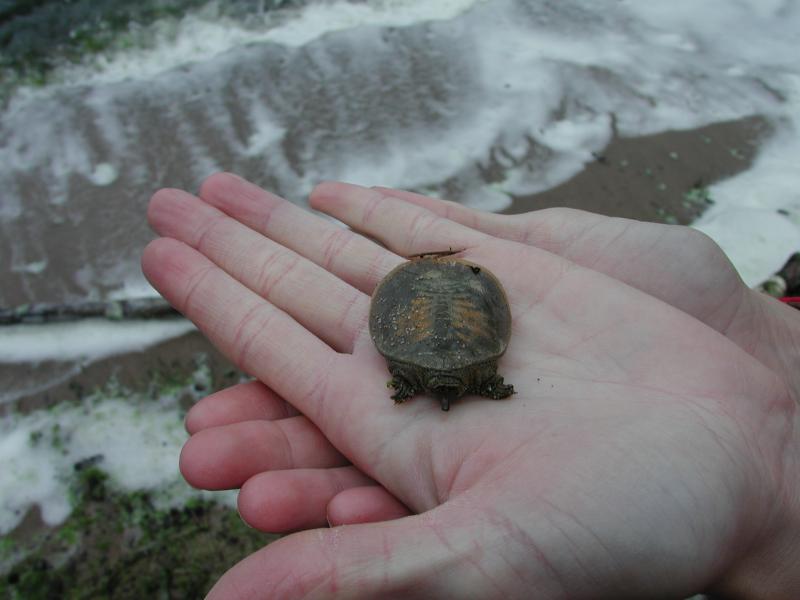 Information for this guide was last updated on: November 1, 2018