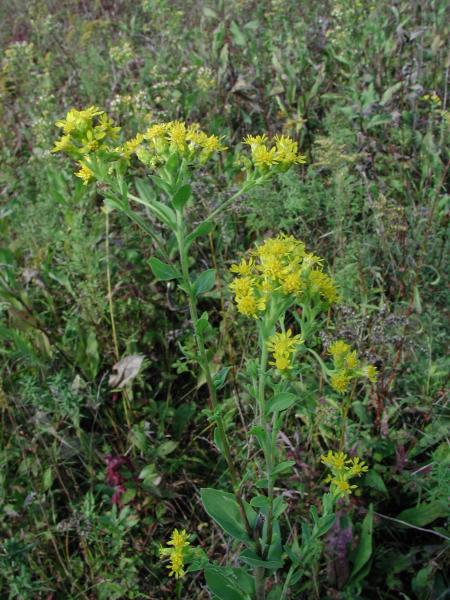 The genus gets its name from the Latin solidus, "whole," referring to the reputed properties of the goldenrods to heal wounds. The specific name refers to its stiff leaves. Rare in the states along the east coast, this goldenrod is very common in the midwestern and prairie states where it blankets grasslands with its showy, flat-topped flower stalks.

There are nine known populations and at least ten additional historical locations. This plant has been threatened by habitat conversion, mainly housing developments. Various invasive species have also had a negative impact.

There has been a short-term decrease in plant numbers because of development of some of the sites and other unknown causes. Some plants have been rescued at one site and transplanted to another area.

There have been development pressures on many of the sites. Residential development and highway construction have extirpated or fragmented some sites.

This plant does very well in successional old fields and other grassland habitats. Should woody vegetation become established, the populations would likely begin to decline. This would support using a brush-hog to occassionally (i.e. once every 3-5 years) to clear the woody vegetation.

Research is necessary to determine which management practices are best at keeping populations healthy.

This goldenroad has a bimodal distribution, that includes the Niagara Escarpment and calcareous or circumneutral areas within the Hudson Valley. New York is at the northeastern edge of its range.

This goldenrod ranges from Rhode Island, Connecticut, western Massachusetts, and New York, south to Georgia, and west to Minnesota and Missouri.

This is a tall, stiffly erect goldenrod, with a thick, fuzzy stem. It usually grows about 1 to 1.5 meters tall with many thick, coarse, fuzzy, gray-green, stiff leaves along the stem. The margins of the leaves have few or no teeth. The lower leaves are long and lance-shaped with long leaf stalks, while the upper leaves are progressively shorter, upright, and clasp the stem. The bright yellow flower clusters at the top of the stem are more or less flat-topped.

A goldenrod with a coarse, puberulent, stem that is 25-150 cm tall. The herbage is densely pubescent with short spreading hairs. The leaves are numerous, thick and harsh, with a grayish-pubescent, and subentire or with appressed rounded teeth. The middle and upper leaves are sessile or nearly so, less than 3 times as long as broad, and much shorter than basal and lower leaves. These leaves are pubescent on both sides. The lower leaves are long-petioled with oval or oblong blades and 3-10 cm. broad. The flowering heads are flat topped and 8-25 cm broad. The involucres are 6-8 mm high.

This goldenrod may be identified from basal leaves or any vegetative portion of the plant. The best life stage for identification, though, is while the plants are flowering.

A unique goldenrod that is easily distinguished from other goldenrods. The key characters of stiff-leaf goldenrod (Solidago rigida) are the flat-topped inflorescence, with stiff leaves that are hairy and ovate to elliptical (less than 3 times as long as broad).

This goldenrod flowers between mid-August until early October with fruiting stalks persisting into late fall. While this plant can be identified vegetatively, it is easier to find when in flower. Surveys should be conducted in late summer to early fall.

The time of year you would expect to find Stiff Flat-topped Goldenrod vegetative, flowering, and fruiting in New York. 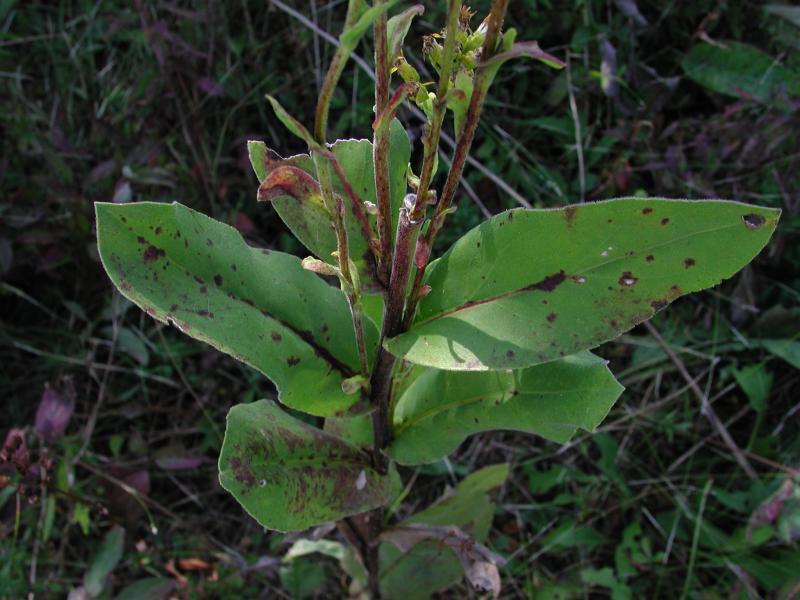 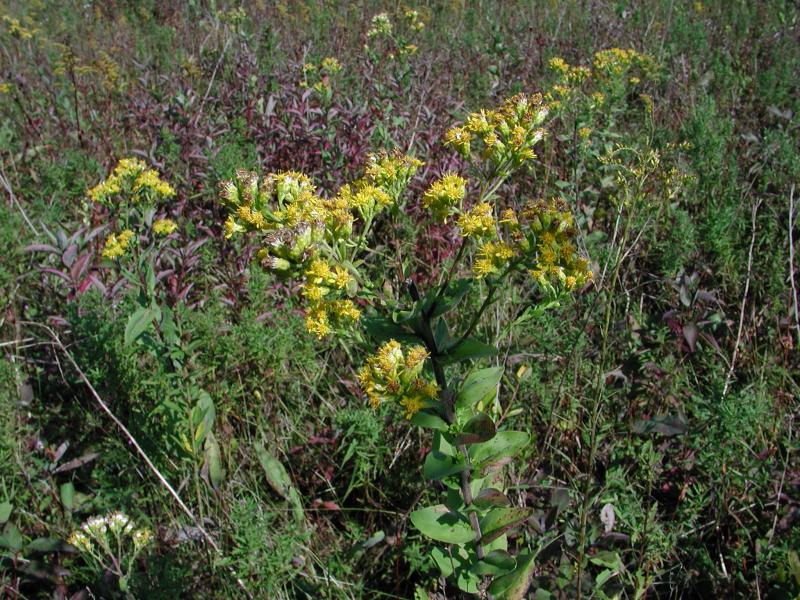 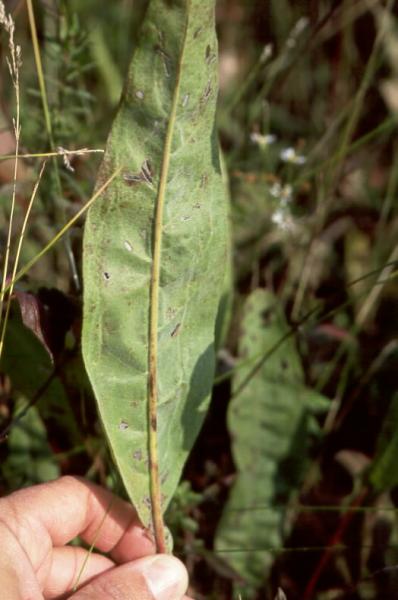 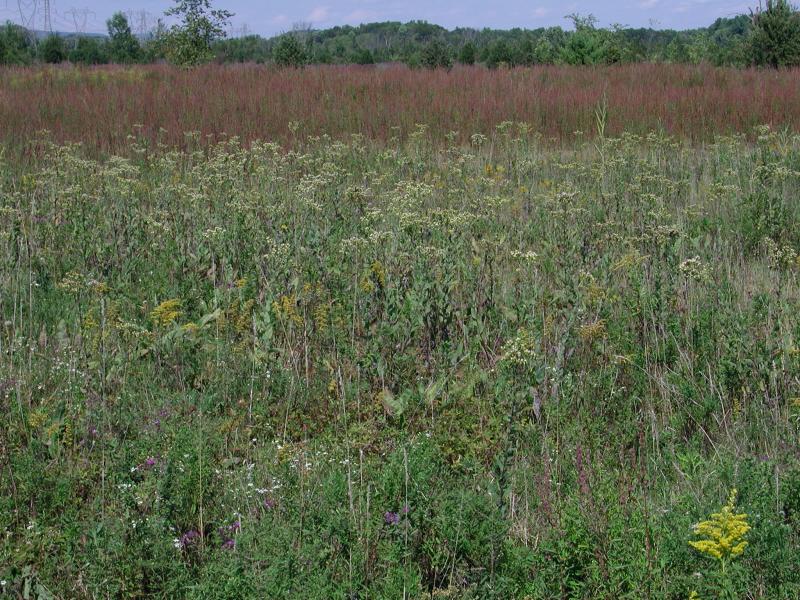 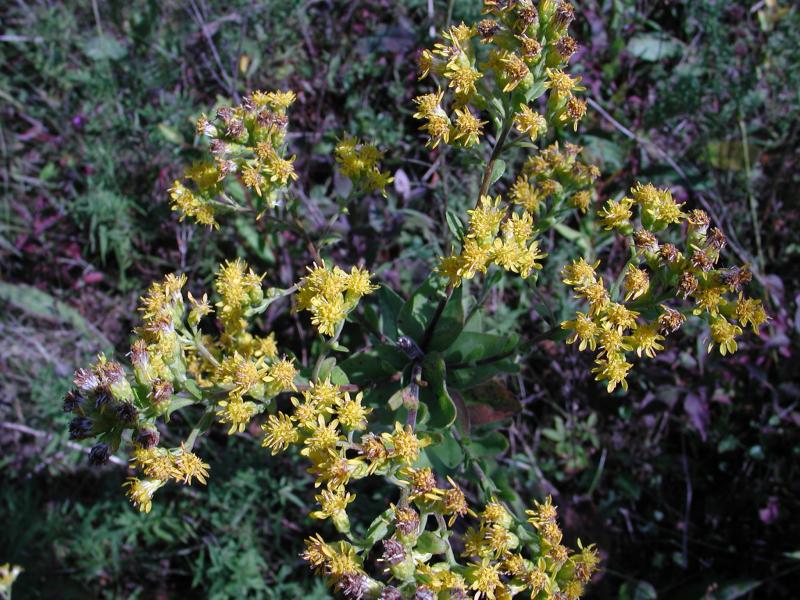 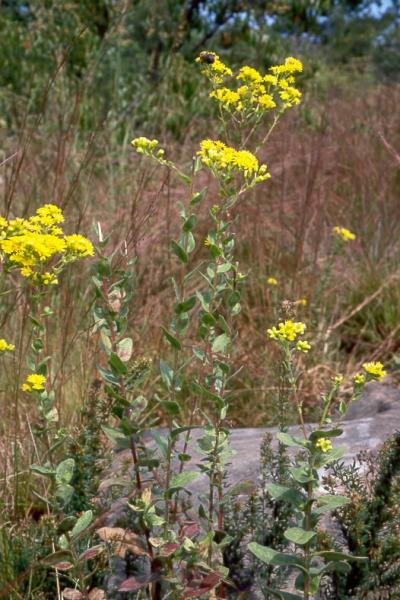