Indian grass (Sorghastrum nutans) is a common grass of some rocky summit grasslands. Indian grass roots can grow to depths of seven feet, comprising two-thirds of the grass's total biomass! Indian grass is also the host plant of common wood nymph and wood satyr butterflies. These butterflies lay their eggs on Indian grass and the caterpillars eat the grass's leaves.

There are likely several hundred occurrences throughout upstate New York. Some of the documented occurrences have good viability and many are protected on public land or private conservation land, although most are relatively small and disturbed. This community has probably declined substantially from historical numbers and a few of the currently documented occurrences contain invasive plants and are threatened by fire suppression.

The number and acreage of rocky summit grasslands in New York have probably declined slightly in recent decades as a result of fire suppression, antenna tower construction, recreational disturbances, and invasive species.

The number and acreage of rocky summit grasslands in New York have probably declined substantially from historical numbers as a result of fire suppression.

Management activities should include the development and implementation of prescribed burn plans at appropriate sites. Fragmenting features such as roads, abandoned tower clearings, and unnecessary trails should be reduced or minimized, and high-impact activities such as mountain biking and hang-gliding should be restricted to trails and least sensitive areas. Prevent the dumping of trash.

Soils are very thin in and around this community and the effect of clearing and construction on soil retention and erosion must be considered during any development activities. Similarly, these soils are acidic and nutrient-poor and any soil enrichment contamination (e.g., from septic leach fields and fertilized lawns) may alter alter community structure and function. The open structure of this community is maintained by fire and presents a fire hazard to existing and proposed development. Unprotected structures located within or near this community are more susceptible to damage from fire.

This community is widespread throughout upstate New York, north of the North Atlantic Coast Ecoregion. Rocky summit grasslands are more common in the southern and eastern parts of this range and are probably represented by different regional variants. This community is concentrated in the Lower New England Ecoregion within the Hudson Highlands, but it is also known from the Taconic Mountains, the Adirondack Mountains, the St. Lawrence and Lake Champlain Valley, and possibly the western part of the state.

The range of the broadly-defined community is probably global. Examples with the greatest biotic affinities to New York occurrences are suspected to be widespread throughout the mountainous areas of the Appalachian Range. Occurrences are suspected of being concentrated near the middle of this range. This range is estimated to span north to southern Canada, west to Ohio and Kentucky, south to Alabama and Georgia, and southeast to New Jersey.

A grassland community that occurs on rocky summits, ridges, and exposed outcrops. The vegetation is dominated by herbaceous plants, especially grasses. Woody species, such as red oak (Quercus rubra) and lowbush blueberry (Vaccinium pallidum, V. angustifolium), are sparse, and may be present near the community margins (Edinger et al. 2002).

Known examples of this community have been found at elevations between 10 feet and 4,365 feet.

Many of the grasses and forbs characteristic of this community, such as little bluestem and goldenrod, come into maturity in late summer. 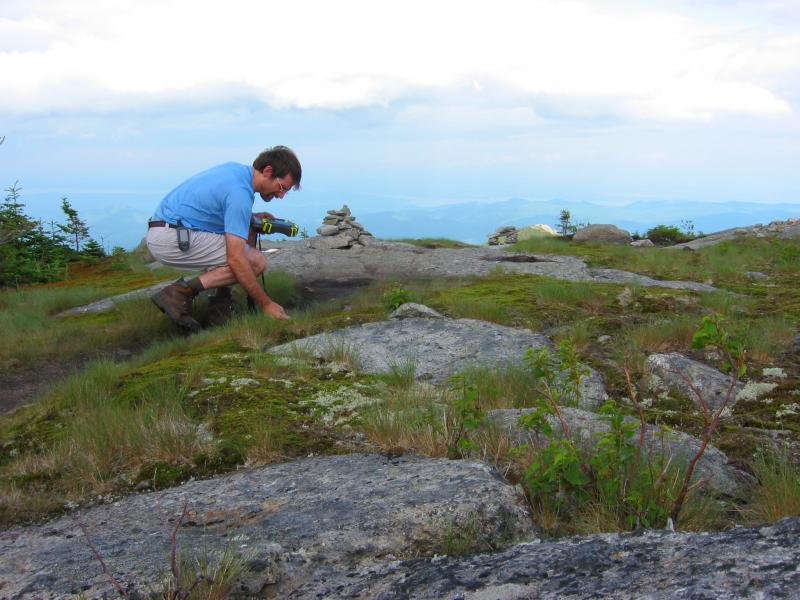 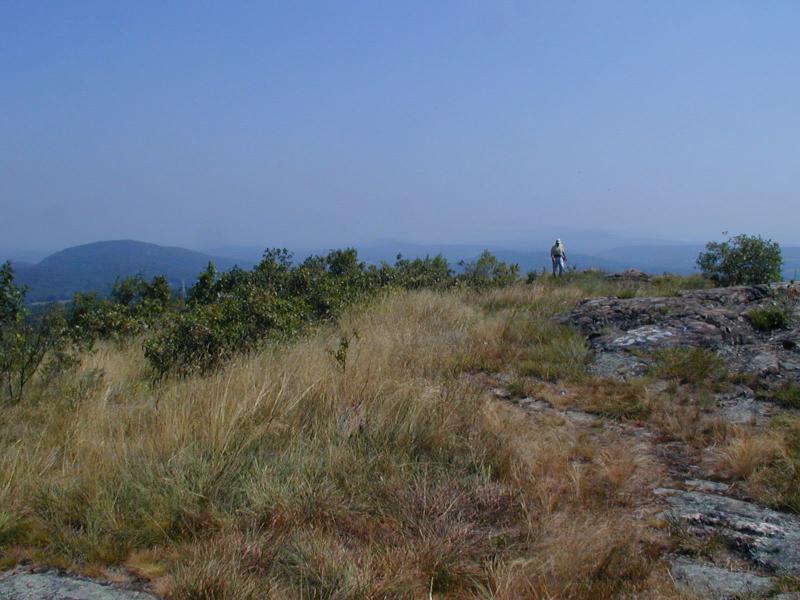 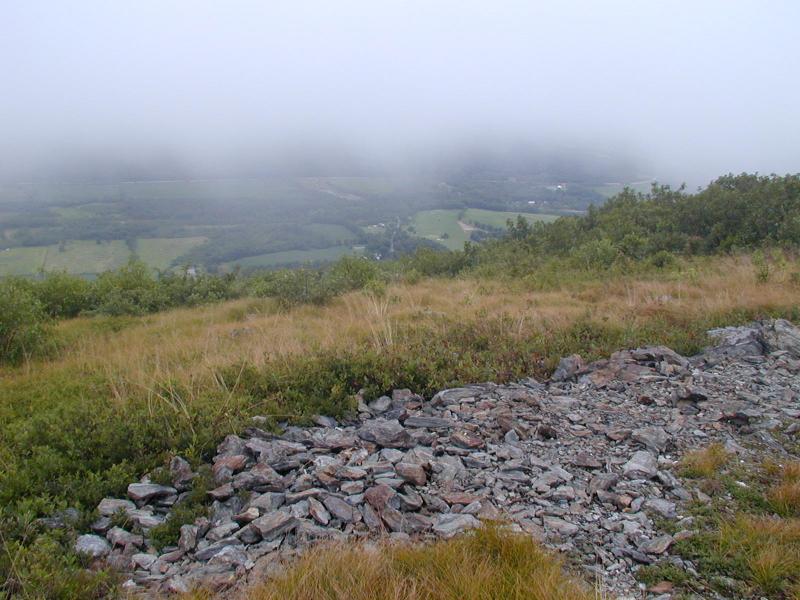 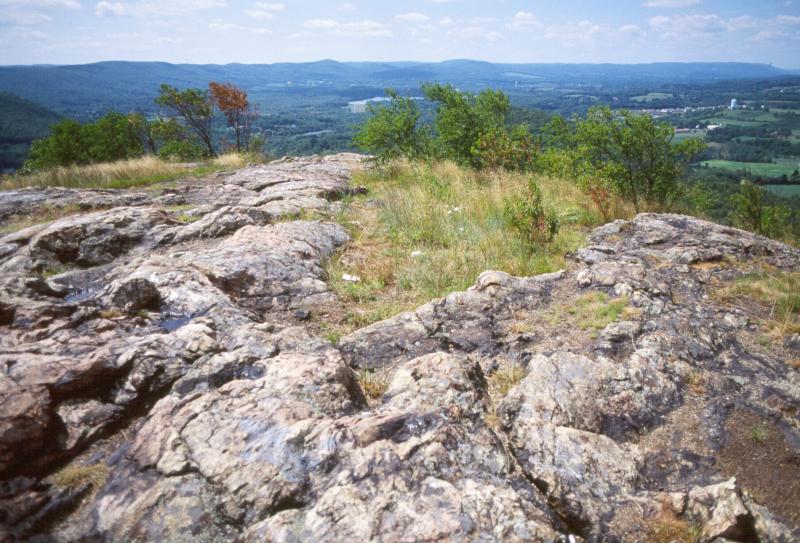 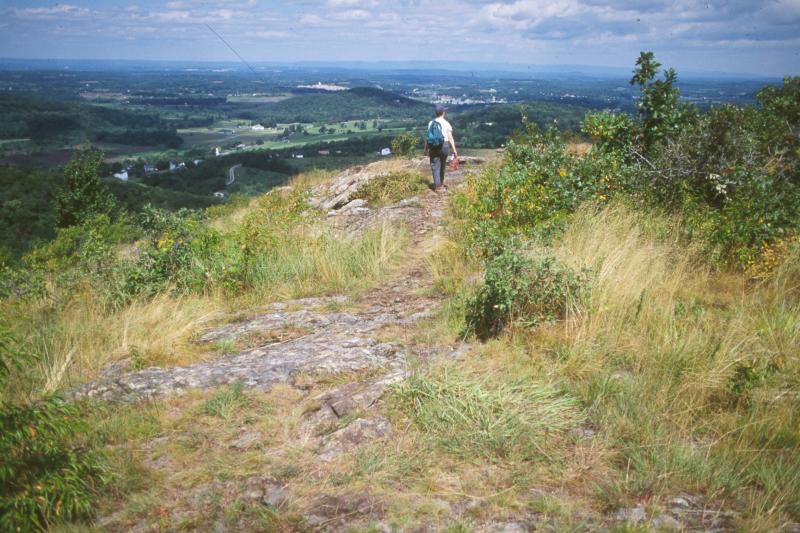 This figure helps visualize the structure and "look" or "feel" of a typical Rocky Summit Grassland. Each bar represents the amount of "coverage" for all the species growing at that height. Because layers overlap (shrubs may grow under trees, for example), the shaded regions can add up to more than 100%.