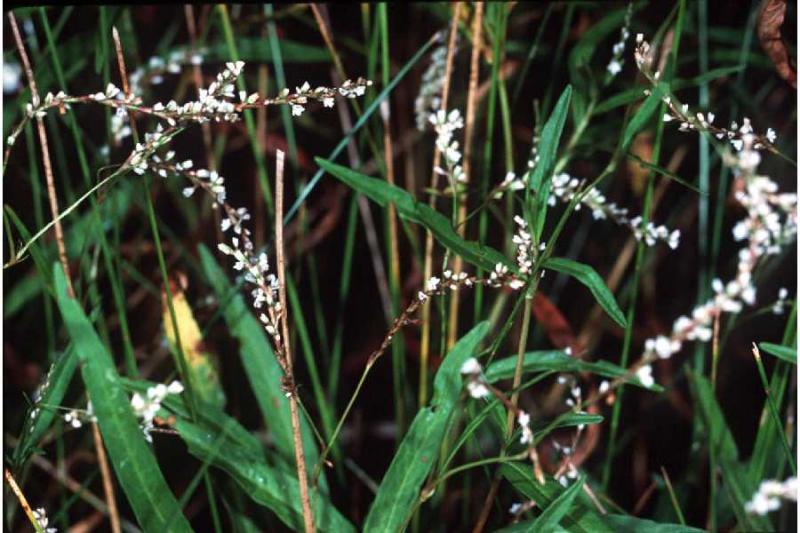 The bristly hairs on the margin of the membrane surrounding the stem at the base of the leaf (ochrea) give this plant its species name (Fernald 1950).

There are four existing populations but all of them have 100 plants or fewer. There are 22 additional historical records from the late 1800s through the 1950s which need to be resurveyed. One population no longer exists because its habitat has been destroyed.

The short-term trend is unknown due to an insufficient number of recent surveys.

The long-term trend of this species is apparently strongly negative. It seems to have severely declined over the last 100 years although more surveys are needed to confirm this.

There are currently no known threats.

Establish and maintain natural buffers around the wetlands where this species occurs to preserve the natural hydrology and to keep out wetland invasive species.

More research is needed into the habitat preference of this species since it occurs in small numbers in large wetland complexes.

In New York this species occurs in a variety of wetlands from pond shores to open marshes, ditches, and stream corridors within red maple swamps. It has not been found in coniferous wetlands (New York Natural Heritage Program 2012). Marshes and shallow water (Gleason and Cronquist 1991). Alluvial woods and swamp forests (FNA 2005).

This wetland herb ranges from Long Island across New York south of the Adirondacks. It is absent from the Southern Tier and many counties in eastern New York.

It is most common in the south central and southeastern US with scattered populations north to the Midwest, New York and Massachusetts where is considered rare. It also extends south from Texas into Latin America.

Swamp smartweed is a robust perennial wetland wildflower that grows up to 1.5 meters tall from a tough, woody rhizome. Lanceolate leaves, 7-20 cm long and somewhat hairy, grow from strongly swollen nodes. The ochrea (stem sheath above the base of the leaf) is brown and papery in texture, with flat margins topped by bristles 6-12 mm long. The surface of the ochrea has long, ascending to spreading hairs, at least at the top. The hairs are attached to the ochrea only one third of their length and spread out along the remainder. The inflorescence is more or less erect and not drooping. The small greenish-white to creamy tan flowers are smooth and not glandular-punctate. The peduncles are without stalked glands. The achene is 2-3 mm long, brown to black and lustrous (FNA 2005).

The best time to identify this species is when it is in flower or fruit.

The very similar and common species Persicaria hydropiperoides, mild water pepper, has more slender stems, flowers that are usually pink to rose colored (sometimes they can be whitish) and ochrea with hairs that are pressed to the stem for usually half to two thirds their length. Persicaria amphibia, water smartweed, has dense spikes of deep rose colored flowers and usually occurs in deeper water (FNA 2005).

Flowers and fruits present from August until early fall.

The time of year you would expect to find Bristly Smartweed flowering and fruiting in New York.