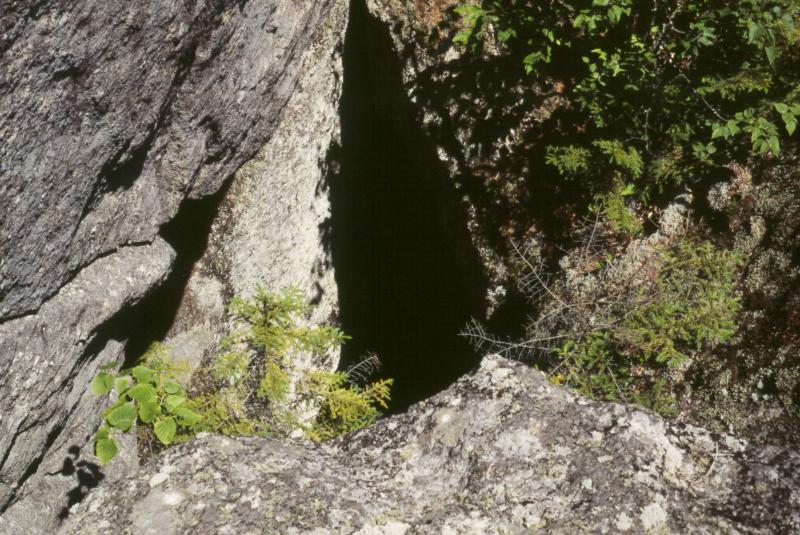 Talus cave communities are not like typical caves. They occur amidst boulders or cobbles where openings form between rocks. They originate from layers of rocks and boulders that slip down a mountain or cliff. Animals that use talus caves for denning and cover include rattlesnakes, bobcats, porcupines, bats, and other small mammals and reptiles.

There are a few hundred occurrences statewide. A few documented occurrences have good viability and few are protected on public land or private conservation land. This community is limited to areas of the state with fractured talus that accumulates at the base of cliffs and mountains. There are a few large, high quality examples in New York. The current trend of this community is probably stable for occurrences on public land, or declining slightly elsewhere due to moderate threats that include mineral extraction and recreational overuse.

The number and acreage of talus cave communities in New York have probably declined slightly in recent decades as a result of mineral extraction and other development.

The number and acreage of talus cave communities in New York have probably declined moderately from historical numbers as a result of mineral extraction and other development.

This community is dependent on the accumulation of fractured talus at the base of cliffs and mountains. Talus cave communities are threatened by adjacent upslope development (e.g., residential, agricultural, industrial) and its associated run-off. Other threats include habitat alteration (e.g., mining, logging adjacent forests). Recreational overuse in the form of concentrated or sustained rock climbing and cave exploration is a threat to some occurrences, especially during denning season for mammals. Recreational overuse in areas adjacent to talus caves is a relatively minor threat (e.g., ATVs, trampling by visitors, campgrounds, picnic areas, trash dumping).

Where practical establish and maintain a natural forested buffer to reduce storm-water, pollution, and nutrient run-off, while simultaneously capturing sediments before they run into the talus cave system. Avoid habitat alteration in the surrounding landscape. Restore sites that have been unnaturally disturbed (e.g., by mining). Although not considered an immediate threat, it may be prudent to prevent the spread of invasive exotic species into the talus cave community through appropriate direct management, and by minimizing potential dispersal corridors, such as trails and utility ROWs. Monitor rock climbing and caving activity, and develop a management plan for sites where recreational overuse is a concern.

Need quantitative surveys of all sites and to search for additional sites. Survey for occurrences statewide to advance documentation and classification of talus cave communities. Continue searching for large talus caves in good condition (A- to AB-ranked).

Need research to quantify composition of talus cave fauna. Research is need to document the use of talus cave communities by animals as breeding sites. Three to five ecoregional variants (including Northern Appalachian, Lower New England, and Alleghany Plateau types) are suspected to differ in characteristic and dominant mammals, reptiles, insects, lichens, bryophytes, and fungi. More data on invertebrates, bryophytes, and fungi, as well as regional variants, are needed.

This community is sparsely scattered throughout upstate New York, north of the North Atlantic Coast Ecoregion. It is concentrated in the mountainous areas of the state including documented examples in the Adirondack Mountains and Taconic Foothills.

This physically broadly-defined community may be worldwide. Examples with the greatest biotic affinities to New York occurrences are suspected to span north to southern Canada, west to Illinois, southwest to Kentucky and Tennessee, and southeast to North Carolina

A subterranean community that occurs in small crevices and caves with walls that are composed of boulders or cobbles, usually within a talus slope or at the base of a cliff. Most examples are shallow and primarily composed of twilight zone, with possible small areas of dark zone. Bryophytes, lichens, and fungi may be present growing on the rocky substrate. Animal species such as timber rattlesnake (Crotalus horridus), bobcat (Lynx rufus), North American porcupine (Erethizon dorsatum), and rock vole (Microtus chrotorrhinus) may use talus cave communities for denning. Bats may be present in some examples. This community includes the subterrean portion of ice caves, which contain ice that remains into or throughout the summer, creating a cool microclimate just outside the cave opening. The floral composition near the cave opening is influenced by the cool temperature and is often made up of boreal species (see ice cave talus community).

Talus cave communities are located within a talus slope, with the walls consisting of large rocks, boulders, and cobbles. The flora and fauna vary greatly. Larger examples may serve as denning sites for small and medium vertebrates.

Known examples of this community have been found at elevations between 675 feet and 2,264 feet.

Talus cave communities can be observed any time of the year. 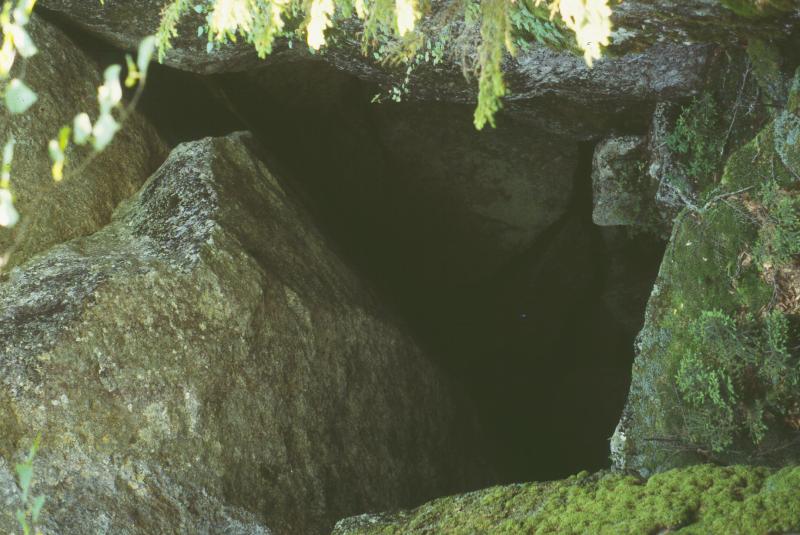 This figure helps visualize the structure and "look" or "feel" of a typical Talus Cave Community. Each bar represents the amount of "coverage" for all the species growing at that height. Because layers overlap (shrubs may grow under trees, for example), the shaded regions can add up to more than 100%.

Nardacci, M. 1991. Guide to the Caves and Karst of the Northeast. National Speological Society, Huntsville, AL.