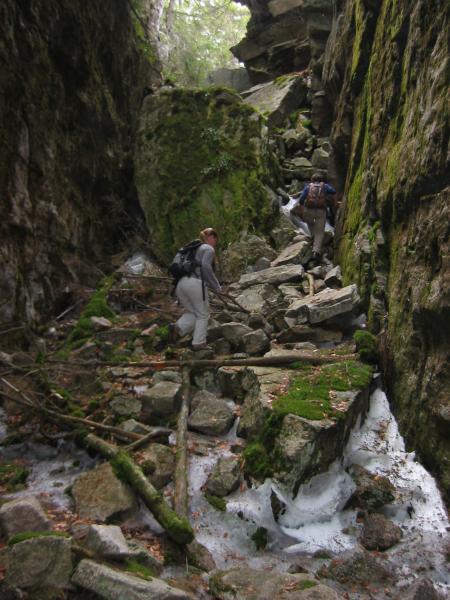 During the spring and summer, the air in ice caves is colder than the outside air. Warm air enters the sinkholes, is cooled as it flows over ice, and then escapes through vents in the slopes, keeping them at a temperature between 37 and 45 degrees Fahrenheit. This creates a variety of microclimates that support species characteristic of cooler climates. For example, the ice caves of the Shawangunks support northern species such as red and black spruce, mountain ash, and creeping snowberry while the surrounding communities are mostly pitch pine barrens and oak forests.

There are about 15 to 40 occurrences statewide. A few documented occurrences have good viability and few are protected on public land or private conservation land. This community is limited to areas of the state with fractured talus that accumulate sufficient ice that persists into summer. Although most examples are relatively small, there are a few large, high quality examples in New York. The current trend of this community is probably stable for occurrences on public land, or declining slightly elsewhere due to moderate threats that include mineral extraction and recreational overuse.

The number and acreage of ice cave talus communities in New York have probably declined slightly in recent decades as a result of mineral extraction and other development.

The number and acreage of ice cave talus communities in New York have probably declined moderately from historical numbers as a result of mineral extraction and other development.

This community is dependent on the accumulation of ice and snow deep within fractured talus that persists well into summer, or even year-round. Given this intrinsic vulnerability, ice caves may be susceptible to climate change that results in the elimination of these ice stores. Ice cave talus communities are threatened by adjacent upslope development (e.g., residential, agricultural, industrial) and its associated run-off. Other threats include habitat alteration (e.g., mining, logging adjacent forests). Recreational overuse in the form of concentrated or sustained rock climbing is a threat to some occurrences. Relatively minor recreational overuse adjacent to cliffs is a lesser threat (e.g., ATVs, trampling by visitors, campgrounds, picnic areas, trash dumping). These threats also have an impact on rare cliff-dwelling plants, such as mountain spleenwort (Asplenium montanum) and several rare bryophytes.

Where practical establish and maintain a natural forested buffer to reduce storm-water, pollution, and nutrient run-off, while simultaneously capturing sediments before they run into the talus cave system. Avoid habitat alteration in the surrounding landscape. Restore sites that have been unnaturally disturbed (e.g., by mining). Although not considered an immediate threat, it may be prudent to prevent the spread of invasive exotic species into the ice cave talus community through appropriate direct management, and by minimizing potential dispersal corridors, such as trails and utility ROWs. Monitor rock climbing and caving activity and develop a management plan for sites where recreational overuse is a concern.

A natural (usually forested) buffer around the ice cave talus community will help it maintain the characteristics that make it unique. It may be desirable to close portions of the cave for various durations in order to protect rare plant habitat.

Need quantitative surveys of all sites, especially for bryophytes (rare species have been reported from some occurrences), and search for additional sites. Survey for occurrences statewide to advance documentation and classification of ice cave talus communities. Continue searching for large ice caves in good condition (A- to AB-ranked).

Determine if climate change will affect ice accumulation and persistance within this community. Research which species are dependent on the ice cave cooling function in order to survive in disjunct, warmer locations.

Ice cave talus communities are currently known from the Adirondack Mountains, the Shawangunk Mountains, and the Catskill Mountains. Otherwise the range of this community is uncertain. Similar ice caves probably occur elsewhere in New England. "Algific" talus slopes in the midwest may be similar.

This broadly-defined community may be circumboreal, where substantial amounts of ice accumulate within fractured talus. Examples are suspected to range from northern New England (e.g., Skinner Hollow Cave at Mt. Equinox, VT) and the Adirondack Mountains of New York. Ice caves are also reported from West Virginia (Ice Mountain, WV). Similar cold air producing "algific talus slopes" in the Midwest U.S. may be classified as this community, but need critical comparison of floristic composition.

Ice cave talus communities are woodlands that occur at the base of talus slopes that have ice deposited deep within year-round. The cool air emitted from the openings influences the vegetation such that cool-climate northern species are present at sites in the southeastern portion of the state. The canopy features spruces (Picea spp.), birches (Betula spp.), mountain ash (Sorbus americana), and hemlock (Tsuga canadensis). The understory has sparse shrubs and herbs, but often has a well-developed non-vascular layer. Some rare bryophytes have been found in ice cave talus communities.

A woodland community at the base of talus slopes that contain ice deep within. The vegetation is characterized by cool-climate species such as red and black spruce, mountain ash, and creeping snowberry (Gaultheria hispidula). The non-vascular layer is often well-developed.

Known examples of this community have been found at elevations between 1,215 feet and 2,870 feet.

During July, two species of lowbush blueberry in the understory of this community bear fruit. In autumn, the foliage of the hardwood canopy species and the understory shrubs turn bright colors and provide an attractive contrast to the dark green of the spruces present. Non-vascular species, which are often abundant in ice cave talus communities, can be observed anytime when snow cover is absent. 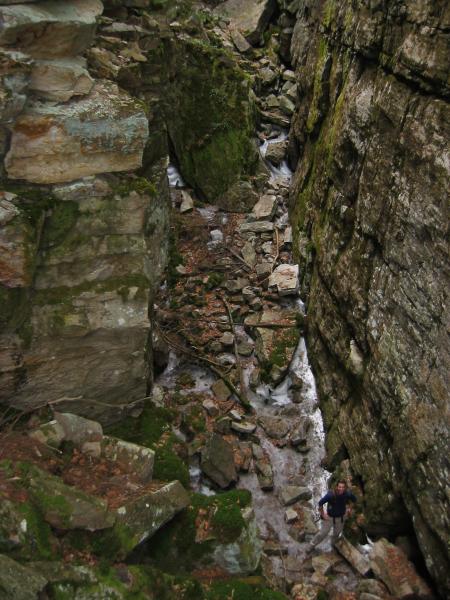 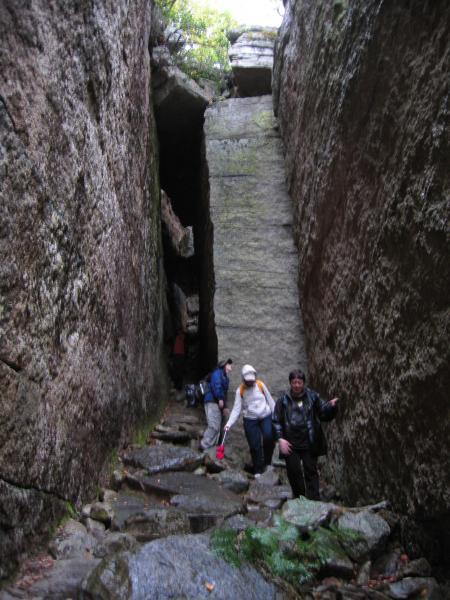 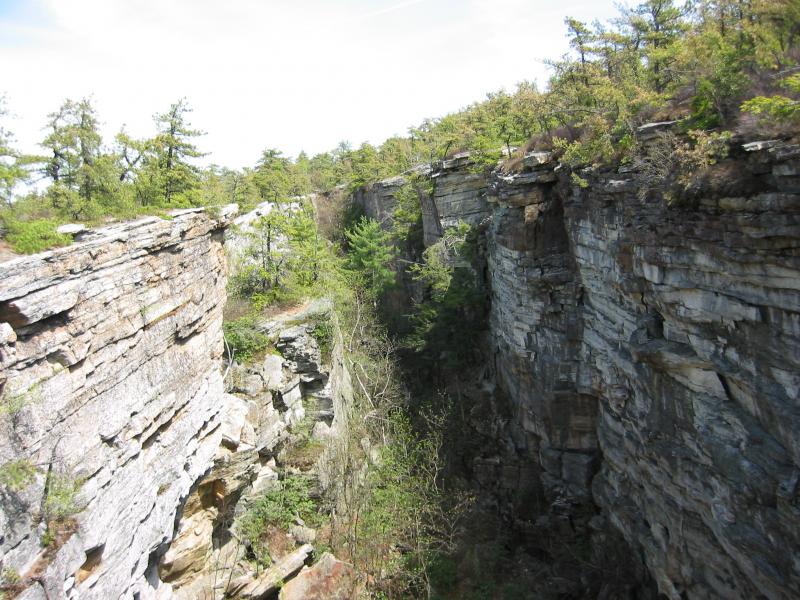 This figure helps visualize the structure and "look" or "feel" of a typical Ice Cave Talus Community. Each bar represents the amount of "coverage" for all the species growing at that height. Because layers overlap (shrubs may grow under trees, for example), the shaded regions can add up to more than 100%.

Information for this guide was last updated on: April 26, 2019