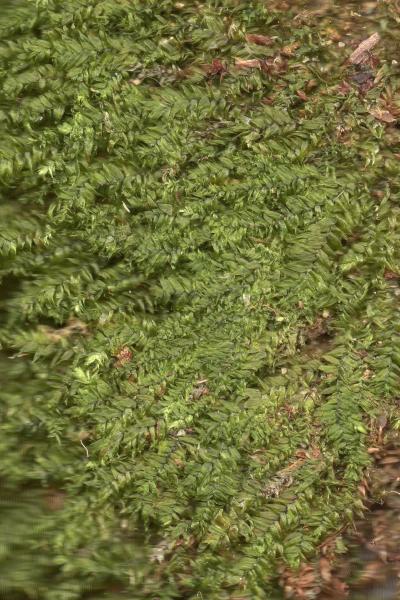 The name 'distichaceum' refers to a flattened and seemingly 2-ranked arrangement of leaves. The species was first collected in Nepal and the northeastern Himalayas.

There are 15 known locations for this moss in the state. Thirteen older specimens were verified as part of the update to the rare moss list of New York (Cleavitt et al. 2006). Several new sites were identified as a part of that project in Dutchess, Ulster and Warren Counties. In 2009, a few new sites were located in the southwestern Catskills. Easily overlooked and similar to other species, further surveys should turn up more locations for this moss.

The trend seems stable for most populations.

There are no known threats at this time. Pseudotaxiphyllum distichaceum can be found in a variety of habitats, from forests to cliffs and ledges. Because it is easy to mistake for other more common species, it is probably overlooked and may not be as rare as it seems. The species was found at two of three random roadside ledge sites, which has been interpreted as strong evidence that it has been undercollected in the state (Cleavitt et al. 2006).

It is often found on moist soil of banks in woods, on the underside of ledges or in crevices as well as on moist cliffs of acid rock (Crum & Anderson 1981). Base of ledges (Cleavitt 195, NYBG). On wet boulders in woods (Ireland 1982).

Pseudotaxiphyllum distichaceum occurs from the Adirondacks south to the Catskills. New York is close to the northern edge of its range.

Pseudotaxiphyllum distichaceum occurs in North America from Maine to South Carolina and west to Michigan, Wisconsin, Illinois, Missouri and Arkansas; in Ontario and Nova Scotia; Central and South America; the Himalayan mountains; and Japan.

Pseudotaxiphyllum distichaceum , a moderately small moss, grows in shiny, flat mats on the bare soil of brook banks, trail edges, cliff crevices and bases of cliffs in wooded areas. Small brood branches are common and often clumped at the tips of branches. The leaves are wide-spreading and very flattened; they are somewhat undulate above and secund at the tips when dry.

A moss with few distinguishing characteristics, Pseudotaxiphyllum distichaceum has many overlapping flattened branches. Because of this flattening, the leaves appear to be in two rows. This moss almost always has brood branches clustered at the tip of the branches, easily seen with a handlens. These brood branches are short to elongate and end in a cluster of 1-5 leaf primordia. Under the microscope, its leaves are often asymmetric, somewhat toothy at the tips, never curved downwards, with longish, smooth cells, and with undifferentiated alar cells. It is never seen with capsules.

Pseudotaxiphyllum distichaceum can be identified when brood branches are present.

Pseudotaxiphyllum elegans is quite similar but both the location and the structure of its brood branches are different from those of P. distichaceum. In P. elegans, brood branches are usually found along the length of the branches instead of clumped at the end, and its brood branches are more like copies of the parent plant, bearing reduced leaves throughout instead of clustered at the tip. In P. elegans, the leaves are more symmetric as well and are not usually undulate. The species of the genus Plagiothecium are also similar; they are also flattened mosses growing in mats in similar habitats. These mosses do not have brood branches like Pseudotaxiphyllum species, although sometimes they can have cylindrical brood bodies in the leaf axils. All Plagiotheciums have leaves that curve downward and their leaves are usually without teeth.

Like most bryophytes, this species can be seen in good condition any time of the year.

The time of year you would expect to find Two-ranked moss vegetative in New York.

Information for this guide was last updated on: April 27, 2009