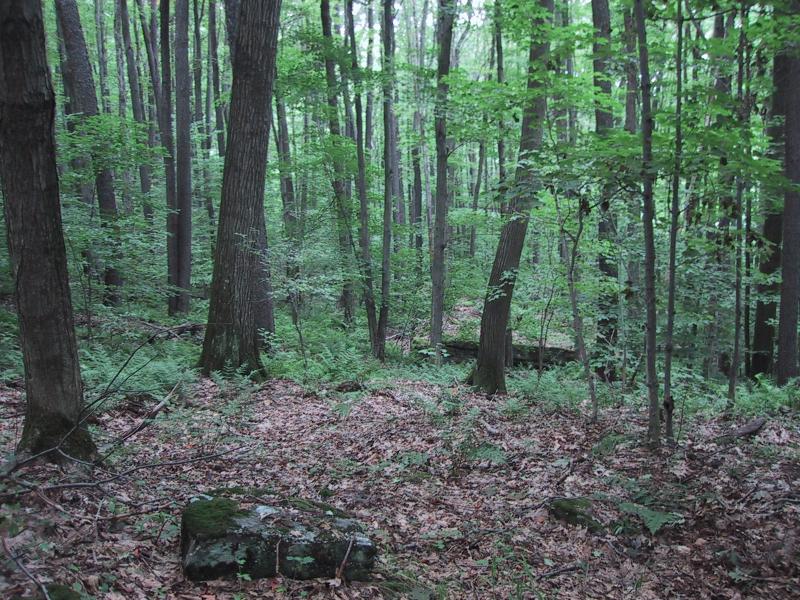 Black bugbane, or black cohosh (Cimicifuga racemosa), a common plant of rich mesophytic forests, has long been used as an herbal medicine to relieve inflammation, and for a variety of conditions that afflict women. Native tribes of eastern North America were known to use this plant in teas for soaking, or in a combination with other herbs as an oral medicine. Early settlers used black cohosh to treat menstrual symptoms, to relieve pain in childbirth, and as an anti-inflammatory agent against arthritis, rheumatism, and lung and nervous disorders. It is now commonly used in Europe to relieve symptoms associated with menopause, and is considered to be an effective alternative to hormone-replacement therapy.

There are probably a few hundred occurrences statewide. A few documented occurrences have good viability and a few are protected on public land or private conservation land. This community has a limited statewide distribution and includes a few large, high quality examples. The current trend of this community is probably stable for occurrences on public land, or declining slightly elsewhere due to moderate threats related to development pressure and logging.

The number and acreage of rich mesophytic forests in New York have probably declined in recent decades as result of clearing for agriculture and development.

The number and acreage of rich mesophytic forests in New York have probably declined substantially from historical numbers likely correlated with the onset of agricultural and development.

Threats to forests in general include changes in land use (e.g., clearing for development), forest fragmentation (e.g., roads), and invasive species (e.g., insects, diseases, and plants). Other threats may include over-browsing by deer, fire suppression, and air pollution (e.g., ozone and acidic deposition). When occurring in expansive forests, the largest threat to the integrity of rich mesophytic forests are activities that fragment the forest into smaller pieces. These activities, such as road building and other development, restrict the movement of species and seeds throughout the entire forest, an effect that often results in loss of those species that require larger blocks of habitat (e.g., black bear, bobcat, certain bird species). Additionally, fragmented forests provide decreased benefits to neighboring societies from services these societies often substantially depend on (e.g., clean water, mitigation of floods and droughts, pollination in agricultural fields, and pest control) (Daily et al. 1997). Rich mesophytic forests with American beech are threatened by beech bark disease. Beech bark disease causes significant mortality and defect in American beech (Fagus grandifolia). The disease results when bark, attacked and altered by the beech scale (Cryptococcus fagisuga), is invaded and killed by fungi, primarily Nectria coccinea var. faginata and sometimes N. galligena (Houston and O'Brien 1983).Rich mesophytic forests are threatened by development (e.g., residential, agricultural, industrial), either directly within the community or in the surrounding landscape. Other threats include habitat alteration (e.g., roads, excessive logging, mining, plantations, deer over-browsing), and recreational overuse (e.g., hiking trails, ATVs, trash dumping, camping). A few rich mesophytic forests are threatened by invasive species, such as garlic mustard (Alliaria petiolata) and Japanese barberry (Berberis thunbergii).

Management should focus on activities that help maintain regeneration of the species associated with this community. Deer have been shown to have negative effects on forest understories (Miller et al. 1992, Augustine & French 1998, Knight 2003) and management efforts should strive to ensure that regenerating trees and shrubs are not so heavily browsed that they cannot replace overstory trees. Avoid cutting old-growth examples and encourage selective logging in areas that are under active forestry.

Inventory any remaining large and/or old-growth examples. Continue searching for large sites in good condition (A- to AB-ranked).

Research the composition of rich mesophytic forests in glaciated and unglaciated settings in order to characterize variations.

In New York, rich mesophytic forests are primarily restricted to the unglaciated portion of the Appalachian Plateau in Cattaraugus and Chautauqua counties. However, examples are also known from the Great Lakes Plain within the Eastern Ontario Till Plain in Monroe County, and within the Cattaraugus Finger Lakes Moraine and Hills in Tompkins County. New York is at the northern extreme of the range that extends south along the Appalachians to approximately North Carolina and Tennessee where the richer southern type is known as a "cove hardwood forest."

This forest is found in the High Alleghenies, Western Allegheny Plateau, Central Appalachians, and Cumberlands from New York and New Jersey south to West Virginia, Virginia, and eastern Kentucky.

Known examples of this community have been found at elevations between 300 feet and 2,362 feet.

Because the key to distinguishing a rich mesophytic forest from related types is its vascular plant composition and diversity, it is easiest to identify the community during the growing season, from late May through summer. Striking seasonal leaf color can be enjoyed in the fall. 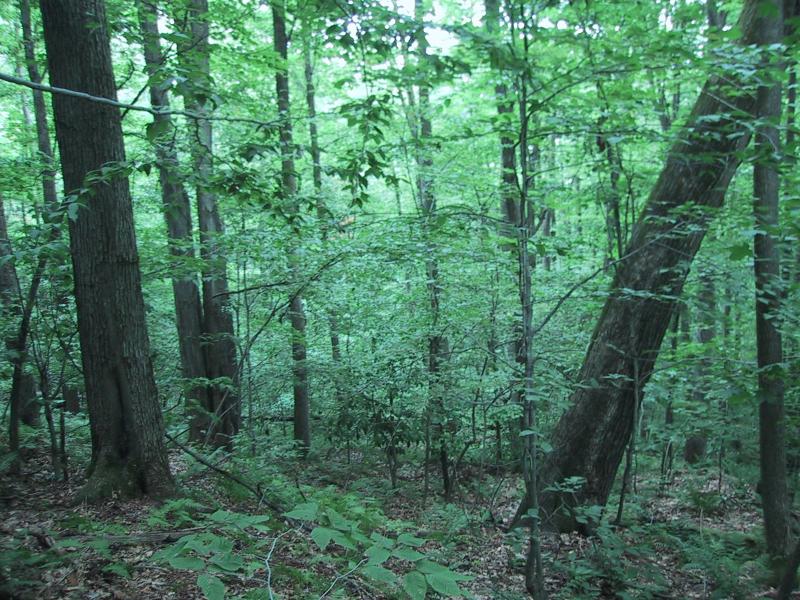 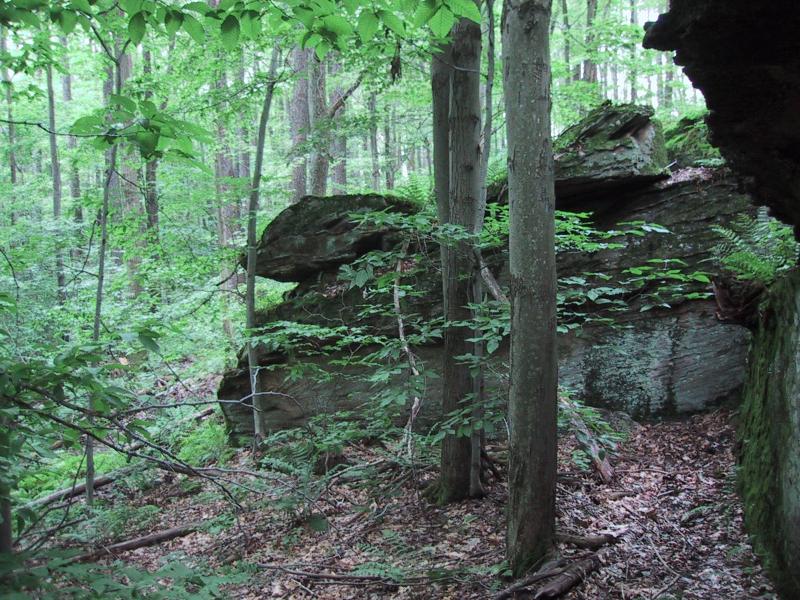 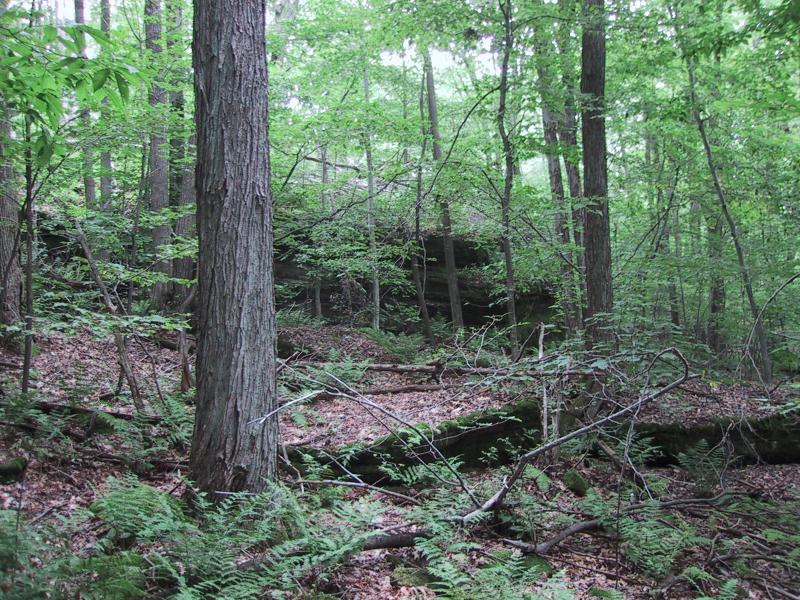 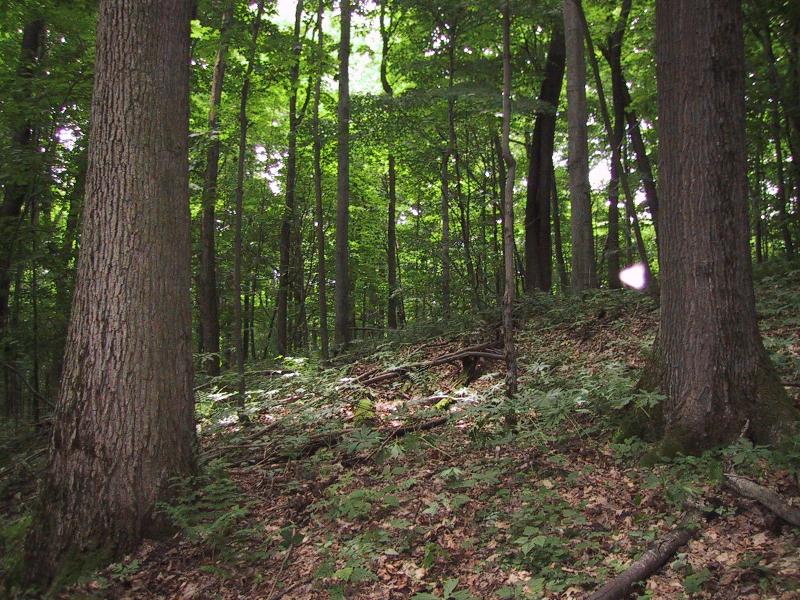 This figure helps visualize the structure and "look" or "feel" of a typical Rich Mesophytic Forest. Each bar represents the amount of "coverage" for all the species growing at that height. Because layers overlap (shrubs may grow under trees, for example), the shaded regions can add up to more than 100%.

This guide was authored by: D.J. Evans