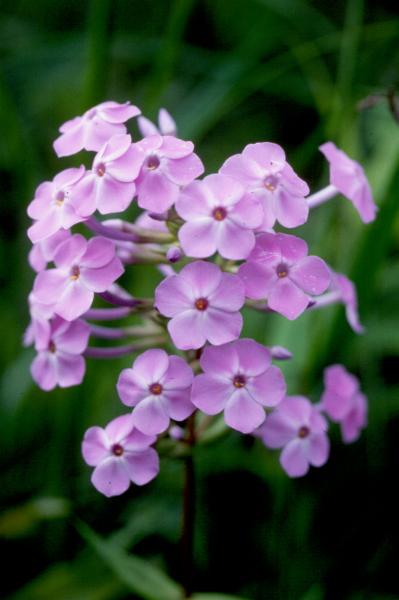 The common name is based on the flower's supposed resemblance to the popular garden flower Sweet-william (Dianthus barbatus), an unrelated species native to Europe. Which "William" it refers to is uncertain, though it may be after the Duke of Cumberland, for his victory over the Scots in the Battle of Culloden. The Scots call the same flower "Stinking Billy" (Wikipedia, accessed 4/25/2008). "Maculata" means spotted, and refers to the purplish blotches on the stems.

There are 8 existing occurrences in the state, and 16 historical occurrences. Half of the verified occurences have 100 plants or less, and some populations appear to be declining.

Four "new" populations have been discovered since 1999, which may be either an upward trend or simply an artifact of more survey work. Some populations have declined in recent years, possibly due to mowing, but more data are needed to assess short-term trends across the state.

Mowing is a threat to some roadside populations; however, succession is also a long-term threat, as this species requires at least partially open habitat.

Mowing or grazing to maintain open habitats could benefit this species if it were done after the growing season.

Wild Sweet-william is found in scattered locations across most areas of the state, except the interior Adirondack Mountains.

The species is found in Quebec, Ontario, Minnesota, and Iowa, and in all of the states east of the Mississippi excluding Wisconsin, Florida, South Carolina, and New Hampshire.

Wild Sweet-william is a perennial wildflower with smooth, erect stems, often with purple spots or streaks, growing up to 80 cm tall. The leaves are in opposite pairs, 5 to 12 cm long, with prominent white midribs, and are lance-shaped, ending in a fine point. The infloresence consists of several branches on short stalks (peduncles), forming a crowded, sub-cylindric cluster. The corolla forms a long, thin tube, separating into 5 wedged-shaped petals, each 12 to 22 mm wide. The flower color ranges from white to more often red-purple (Gleason and Cronquist 1991).

This species is most easily identified when in flower.

Three similar looking Phlox are present in New York: P. divaricata, P. paniculata, and P. pilosa. Phlox divaricata and P. pilosa both have a style which is shorter than or barely equal to the stigma or ovary and the cymes are loose and open, usually the 2 lowest branches are 1 cm or more. Phlox paniculata has veiny leaves with a submarginal connecting vein, and ciliolate leaf margins.

The time of year you would expect to find Wild Sweet William flowering and fruiting in New York. 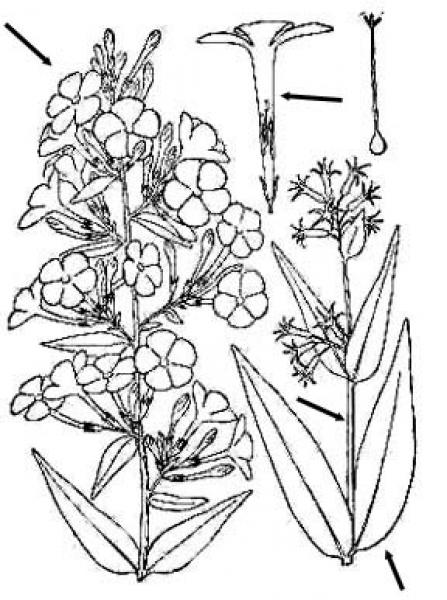