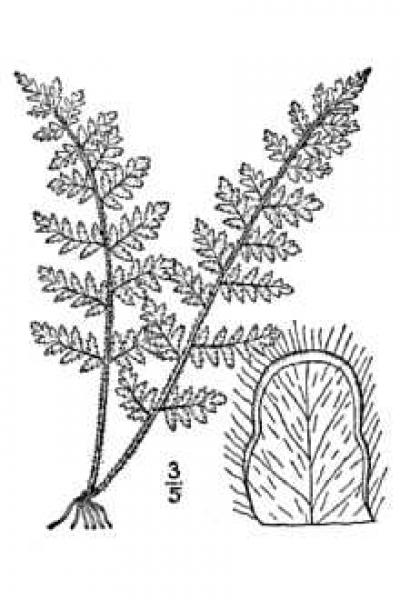 This fern was last seen in New York on Iona Island in the Hudson River in 1954. There are other historical records from the 1800s from Highlands, NY and the northern tip of Manhattan. The genus name refers to the marginal sori (cheilos=marginal and anthos=flower) and the specific name refers to the woolly leaf stalks.

Four of the six historical records have been extirpated and only one current occurrence exists.

Habitat modeling could be done on the preferred rock outcrops of this fern so more potential sites could be surveyed. A visit to known populations located in adjacent states may help narrow down the potential habitat.

A fern of cliffs and rock outcrops, often in areas where traces of lime are found within the rock (New York Natural Heritage Program 2004). Rocky slopes and ledges, on a variety of substrates including limestone and graninte (Flora of North America 1993). Cliffs and shale outcrops, mostly in subacid soil (Gleason and Cronquist 1991). Dry rocky ledges (Cobb 1984). Cliffs and rocky slopes or gravelly banks (Fernald 1970).

There is one existing site of this fern today, but there are also historical reports from upper Manhattan, Westchester County, Poughkeepsie, town of Highland near the Mid-Hudson Bridge, and a single location in the Catskills. The Hudson Highlands, Catskills, Palisades, and southern Shawangunk Mountains should be surveyed in more detail for the possible presence of this plant. This plant was recently rediscovered in New York.

A fern with very local distribution ranging from Connecticut and New York, west to Wisconsin and Minnesota, and south to Georgia and Texas.

This is a small greenish-gray fern that grows out of the cracks in cliffs. The narrow leaves are not very dense and grow up to 30 cm long with 12-20 pairs of lance-shaped leaflets that decrease in size and spacing especially toward the tip. The leaflets are divided once into smaller leaflets with shallow lobes. They are densely hairy underneath with mats of shiny white to brownish hairs. The spore packets (sporangia) are arranged around the edge of the underside of the leaf and partially covered by the inrolled edge of the leaf. The leaf stalks are wiry, brittle, hairy, and very dark brown or purple. When the weather is dry the plants curl up into a mass of dry rusty leaves that are soon resurrected by the rain.

A fern with fronds up to 50 cm. long. These fronds are tripinnate, green to gray-tomentose above, and very densely woolly beneath with tangled shiny white to brownish matted trichomes. The ultimate pinnules are distinct, 1-2 mm long, and roundish-obovate. The margins of the pinnules are reflexed, forming a continuous and somewhat membranaceous indusium. The rhizomes are short and the stipes are densely wooly.

Since this fern is currently not known in New York, a single frond with sori should be collected to voucher its presence. Once a population is known though, only photopgraphs will be needed to verify its identification. These photos should include the top and underside of the leaf frong with close-up images showing the sori.

No other Cheilanthes species are present in New York, but it may be confused with a vegetative Woodsia species. The purple rachis with white hairs and no scales will differentiate it from Woodsia. To positively identify, all effort should be made to observe and photograph a frond with spores.

Spores may be present on this fern from summer through fall. Surveys should occur during this spore producing period.

The time of year you would expect to find Woolly Lip Fern vegetative and fruiting in New York.