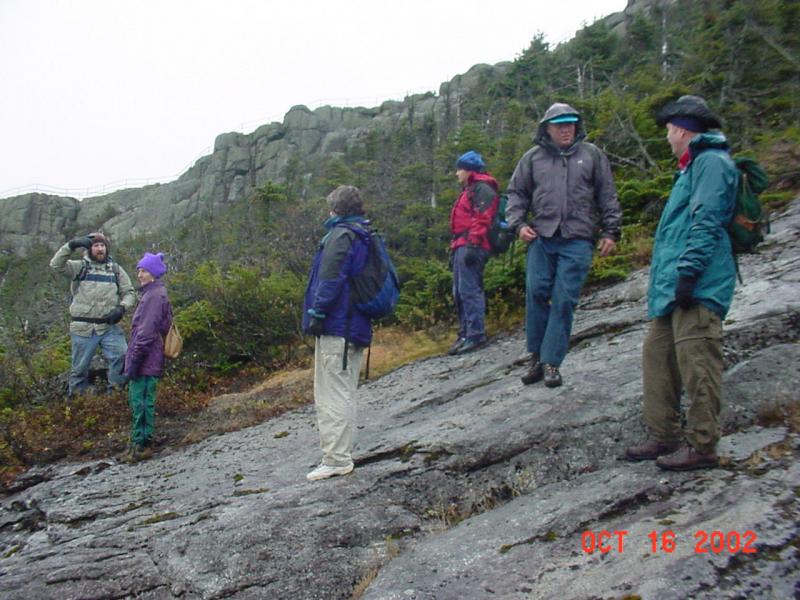 Sliding fens presumably become supersaturated from major rain events and slide off the cliff before peat build-up resumes. Water is derived from runoff and seeps at higher elevation. Reportedly the peat will accumulate until a critical mass is built up and the large areas of the peat mat slide to the bottom of the steep slope, a phenomenon that may occur once about every 500 years. Alpine sliding fens are limited to the highest elevation areas of the state above the timberline (about 3,500 feet).

The number and acreage of alpine sliding fens in New York have probably remained stable in recent decades as a result of conservation efforts at high elevation areas in the state.

The number and acreage of alpine sliding fens in New York have probably declined slightly from historical numbers likely correlated with minor development and recreational overuse on some summits.

Alpine sliding fen vegetation is fragile because it grows on a shallow peat mat on very steep, open slopes that are prone to breaking and sliding, thus the primary threat to alpine sliding fens is recreational overuse that involves the trampling of fragile peatland vegetation. Communities that occur at higher elevations in the state (e.g., >3,000 feet) may be more vulnerable to the adverse effects of atmospheric deposition and climate change, especially acid rain and temperature increase. Unprotected examples of alpine sliding fen may be threatened by development and recreational overuse (e.g., hiking trails, ski slopes and its related infrastructure).

Management should focus on activities that help maintain regeneration of the species associated with this community. Continue restoration efforts for severely trampled sites. Management activities should be consistent with recommendations presented in the High Peaks Wilderness Unit Management Plan (NYS DEC 1999).

Any nearby development, including trail building, should strive to minimize across-slope and down-slope erosion, especially activities that cut down to the bedrock potentially destabilizing patches of fen. Development should also consider hydrologic connectivity and sub-surface water flow. Activities that alter water flowing towards sliding fens may also alter the character and quality of the fen.

Research the long-term combined effects that atmospheric deposition and climate change may have on alpine sliding fen occurrences. Compare alpine sliding fens in New York with types described in NH and VT (e.g., Sperduto and Cogbill 1999). Document the periodicity of the sliding process.

In New York, this community is restricted to the Adirondack High Peaks in Essex County.

Alpine sliding fens are most likely restricted to the high peaks of New York, Vermont, New Hampshire, and Maine. Requiring unique abiotic conditions (brow of slab, slide, or cliff), they are uncommon rangewide.

The sliding fen is a peatland perched on alpine bedrock at the top of bare slabs or cliffs. Sliding fens presumably become supersaturated from major rain events and slide off the cliff before peat build-up resumes (Sperduto and Cogbill 1999). Water is derived from runoff and seeps at higher elevation. Reportedly the peat will accumulate until a critical mass is built up and the large areas of the peat mat slide to the bottom of the steep slope, a phenomenon that may occur once about every 500 years. Short shrub layer includes leatherleaf (Chamaedaphne calyculata), small cranberry (Vaccinium oxycoccus), bog bilberry (V. uliginosum), bog laurel (Kalmia polifolia), and green alder (Alnus viridis). Other small trees and shrubs include tamarack (Larix laricina) and Labrador tea (Rhododendron groenlandicum). Characteristic herbs include Pickering's reedgrass (Calamagrostis pickeringii), bulrush (Scirpus cespitosus), closed gentian (Gentiana linearis), round-leaved sundew (Drosera rotundifolia), and sedge (Carex bigelowii). Other low-growing herbs include creeping snow-berry (Gaultheria hispidula) and mountain firmoss (Huperzia appalachiana). Characteristic mosses include peat mosses such as Sphagnum angustifolium, S. fallax, S. russowii, S. papillosum, S. pylaesii, and S. magellanicum. A rare peat moss of some sliding fens is Sphagnum lindbergii (Andrus 1980). Other mosses such as Andreaea spp. and Scapania nemorosa may be present. Various crustose lichens grow on the open bedrock areas.

This community is characterized as a shallow peat bog on 5-35 degree slopes on the brow of alpine or subalpine cliffs or slides. Pickering's reedgrass (Calamagrostis pickeringii), compact peatmoss (Sphagnum compactum), and other bog plants are found in these peatlands.

Known examples of this community have been found at elevations between 4,068 feet and 4,331 feet.

Mid to late summer offers a short window for the plants in this alpine community to flower. With luck, you might see the tiny, sticky fly-eating leaves of the sundew (Drosera rotundifolia) and catch the flowers of the small cranberry (Vaccinium oxycoccus), creeping snow-berry (Gaultheria hispidula), and others. 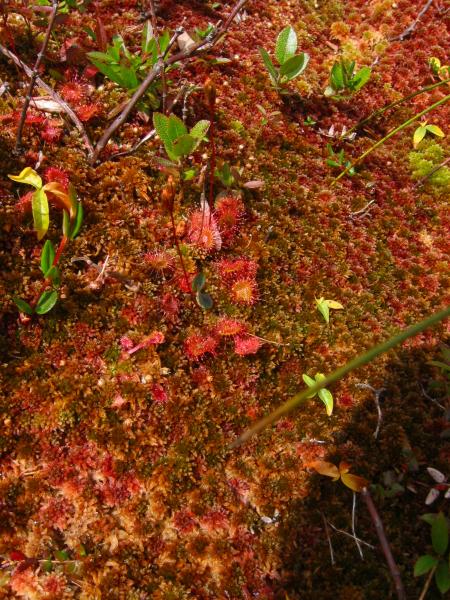 Drosera rotundifolia and Sphagnum on the summit of Mount Skylight in lower-sloped environment than that of a sliding fen.
Tim Howard 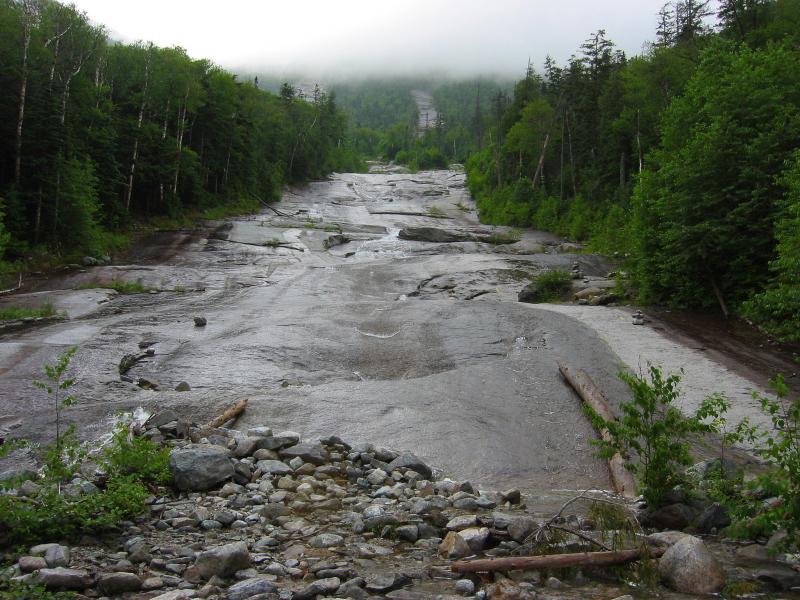 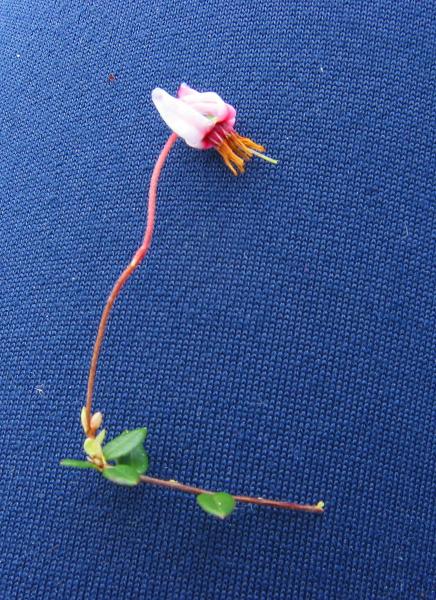 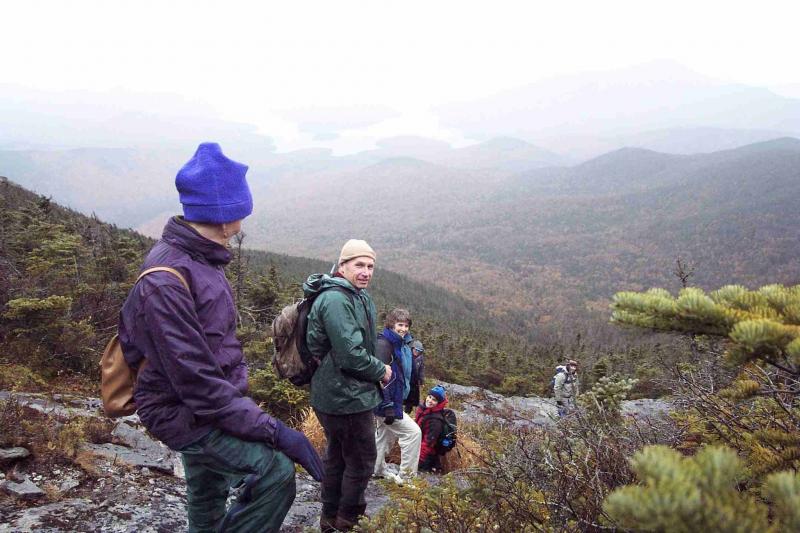 This figure helps visualize the structure and "look" or "feel" of a typical Alpine Sliding Fen. Each bar represents the amount of "coverage" for all the species growing at that height. Because layers overlap (shrubs may grow under trees, for example), the shaded regions can add up to more than 100%.