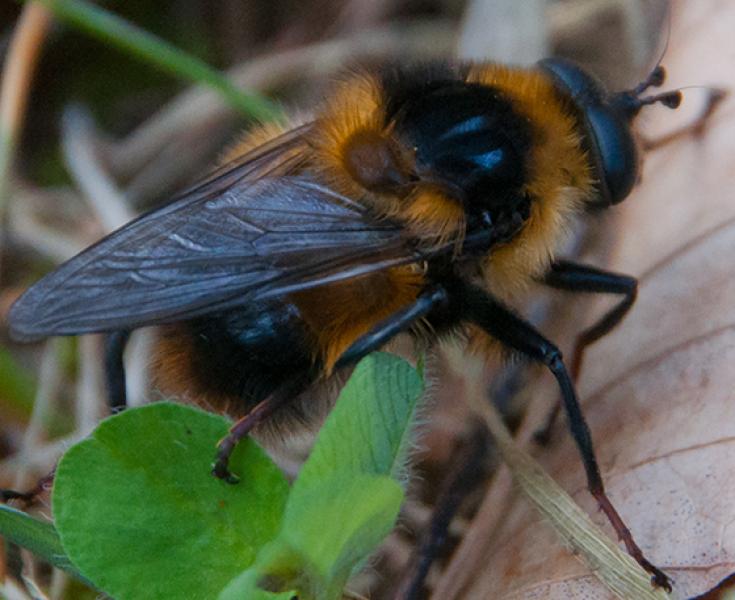 The Bare-cheeked Bumblefly is uncommon throughout its range (Skevington et al. 2019) and in New York it is known from just four occurrences in the central and southeastern portion of the state, only one of which is recent. It relies exclusively on old growth deciduous forests for breeding, a rare and threatened habitat.

The species was re-confirmed in the Catskills in May, 2017.

This species did not appear in an early comprehensive list of the insects of New York (Leonard 1928). It was first documented in the state in the late 1940s in the Finger Lakes region. Two other museum records from central NY came from the 1960s and seventies.

Like all saproxylic (dead wood) insects, this Hover fly is threatened by modern forestry and land management practices that remove trees from stands before they can reach old age because the partially decayed breeding sites within senescent trees take upwards of 100 years to form (Speight 2015).

The presence of this species is a clear indication of old growth forest conditions. Forest management practices allowing long rotation times (more than 100 years) are required to allow deciduous trees to reach the advanced stage where suitable rot-holes can form (Speight 2015).

Very little is known about this species throughout its entire North American range. Research into any aspect of its biology would be a valuable contribution.

These arboreal canopy-dwelling flies are confined to old growth deciduous forests with senescent trees where the larvae live in rot-holes, root cavities and decaying heartwood. Because the larvae are filter feeders, conditions within the forest must remain stable and humid. Adults often descend in the evening to visit flowers and bask in sun flecks in canopy gaps. Sometimes they are also reported from bogs.

It is known only from a few scattered locations in central and southeastern New York.

This uncommon fly occurs in the northeastern US and Canada from North Carolina to Nova Scotia, west through the Great Lakes states and along the US/Canada border to central British Columbia and Alaska (Skevington et al. in press).

Within Criorhina, there is much color variation of pile (fly hair) from orangeish or golden to pale yellow, so beware of using this character alone. The larva is sub-cylindrical and short-tailed with internal mouth hooks. Behind each of the anterior spiracles lies a large laterally directed hook, looking like a pair of cow horns (Rotheray 1993).

The single pair of wings, as well as the Dipteran shape and morphology of the eyes and antennae separate this fly from the Bumblebees that it mimics.

Males can be found hilltopping where they search for females who can sometimes be sighted flying around the base of old deciduous trees investigating rot-holes for oviposition sites (Speight 2015).

The adults feed on pollen and nectar from Chamaedaphne, Salix, Ribes, Prunus. The larvae are saprophagous filter feeders within decaying heartwood of trees, including rot- holes, roots and old stumps. They are adapted for gathering and concentrating micro-organisms suspened in a fluid medium (Rotheray 1993; Skevington et al. in press).

This is an early spring species, most likely to be observed in late April- May.

The time of year you would expect to find Bare-cheeked Bumblefly reproducing and larvae present and active in New York. 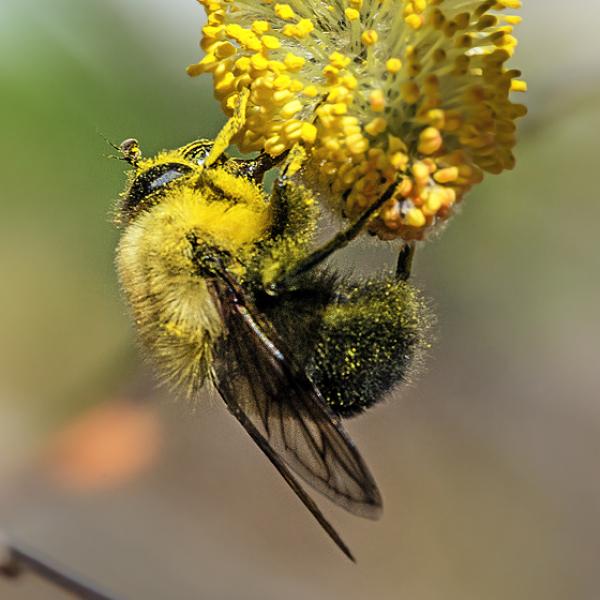