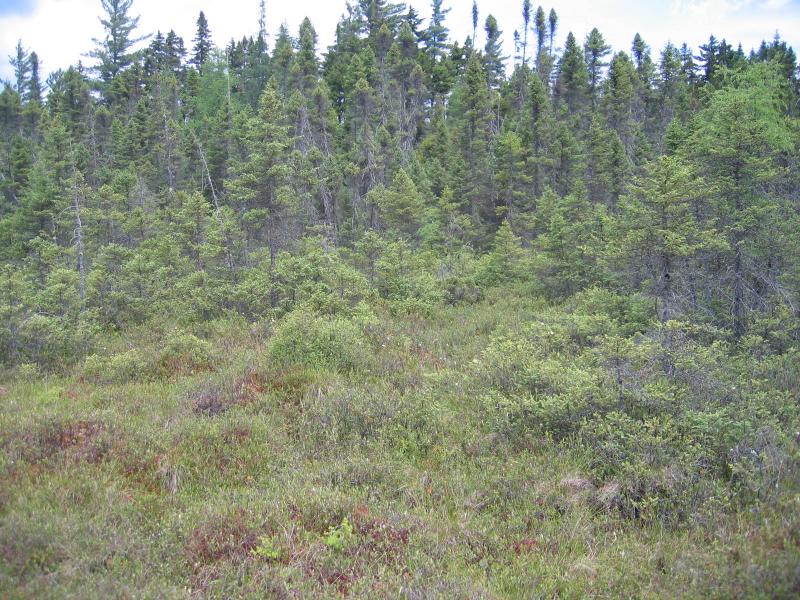 The common name for the tamarack comes from the Algonquian Native American name that means "wood used for snowshoes." Other Algonquian names that are used in English are mainly animals such as caribou, moose, chipmunk, raccoon, muskrat, opossum, woodchuck, and skunk and plants such as hickory and pecan.

There are several hundred occurrences statewide. Some documented occurrences have good viability and are protected on public land or private conservation land. This community has a limited distribution to the northern half of the state, and includes several very large, high quality examples. The current trend of this community is probably stable for occurences on public land, or declining slightly elsewhere due to moderate threats related to development pressure or alteration to the natural hydrology. This community has declined moderately to substantially from historical numbers likely correlated with peat mining and logging and development of the surrounding landscape.

The numbers and acreage of black spruce-tamarack bogs in New York have probably remained stable in recent decades as a result of wetland protection regulations. There may be a few cases of slight decline due to alteration of hydrology from impoundments (conversion to other palustrine community types).

The numbers and acreage of black spruce-tamarack bogs in New York have probably declined moderately to substantially from historical numbers likely correlated with initial peat mining and logging of the surrounding landscape (increasing nutrient run-off into bogs).

Because black spruce-tamarack bogs are naturally acidic and low in nutients, they are particularly susceptible to alteration by elevated nutrient inputs. Bogs may require larger buffers than other wetland types because of their high susceptibility to changes in nutrient concentrations. Direct impacts are typically most serious within 300 feet (90 m) of wetland areas (Sperduto et al. 2000).

Survey for occurrences statewide to advance documentation and classification of peatlands. A statewide review of the acidic peatlands is desirable, similar to the studies done in New Hampshire (Sperduto et al. 2000), Massachusetts (Kearsley 1999), and similar to what New York Natural Heritage did for rich fens (Olivero 2001).

Research is needed to fill information gaps about black spruce-tamarack bogs, especially to advance our understanding of their classification, ecological processes (e.g., fire), hydrology, floristic variation, characteristic fauna, and bog development and succession. This research will provide the basic facts necessary to assess how human alterations in the landscape affect peatlands, and supply a framework for evaluating the relative value of peat bogs (Damman and French 1987).

This community is found primarily in the northern half of the state. It is concentrated in the Adirondacks, but is also common in the Great Lakes area. There are very small, scattered examples in the lower Hudson, Tug Hill Plateau, and possibly also the Alleghany area.

The range is probably widespread throughout Canada and along the northeastern fringe of the United States. The range is estimated to span northeast to Newfoundland, northwest possibly to northwestern Canada, west to Minnesota, southwest to Michigan, and southeast to Massachusetts, Pennsylvania and possibly New Jersey.

A conifer forest that occurs on acidic peatlands in cool, poorly drained depressions. The characteristic trees are black spruce (Picea mariana) and tamarack (Larix laricina); in any one stand, either tree may be dominant, or codominant. Canopy cover is quite variable, ranging from open canopy woodlands with as little as 20% cover of evenly spaced canopy trees to closed canopy forests with 80 to 90% cover. In the more open canopy stands there is usually a well-developed shrub layer characterized by several shrubs typical of bogs including sheep laurel (Kalmia angustifolia), Labrador tea (Rhododendron groenlandicum), mountain holly (Nemopathus mucronatus) and highbush blueberry (Vaccinium corymbosum). In closed canopy stands the shrub layer is usually sparse; however the species composition is similar. The dominant groundcover consists of several species of Sphagnum moss with scattered sedges and forbs. Vascular plant diversity is usually low in these forested peatlands; however the bryophyte and epiphytic lichen flora may be relatively diverse. Characteristic herbs are three-seeded sedge (Carex trisperma), cotton grass (Eriophorum spp.), pitcher plant (Sarracenia purpurea), cinnamon fern (Osmunda cinnamomea), and in shady areas where the canopy is dense, gold thread (Coptis trifolia) and creeping snowberry (Gaultheria hispidula). A black spruce-tamarack bog may imperceptibly grade into and form a mosaic with a dwarf shrub bog. As the peat substrate thins and the wetland transitions to terrestrial communities, the black spruce-tamarack bog may grade into spruce flats.

Known examples of this community have been found at elevations between 318 feet and 2,034 feet.

Open canopy stands with a well-developed bog shrub layer are particularly lovely beginning in late May and continuing through June, when the characteristic shrubs are in full bloom. 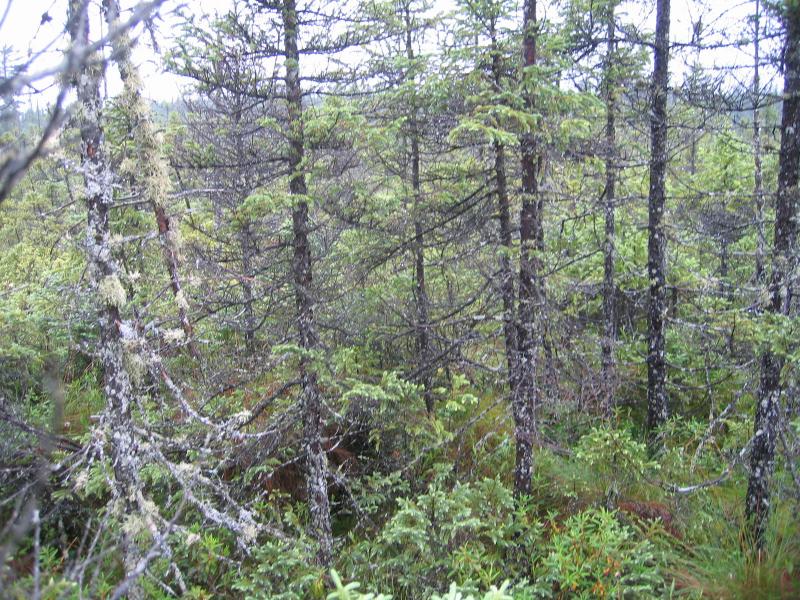 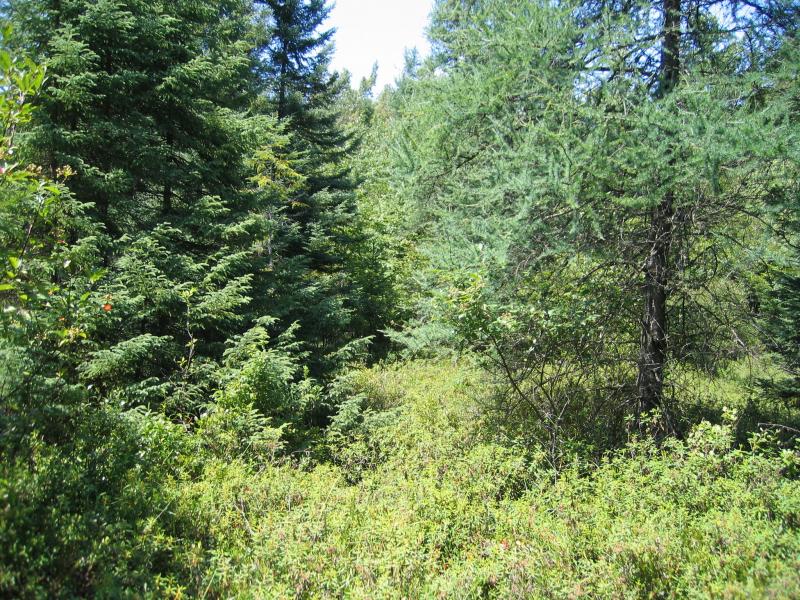 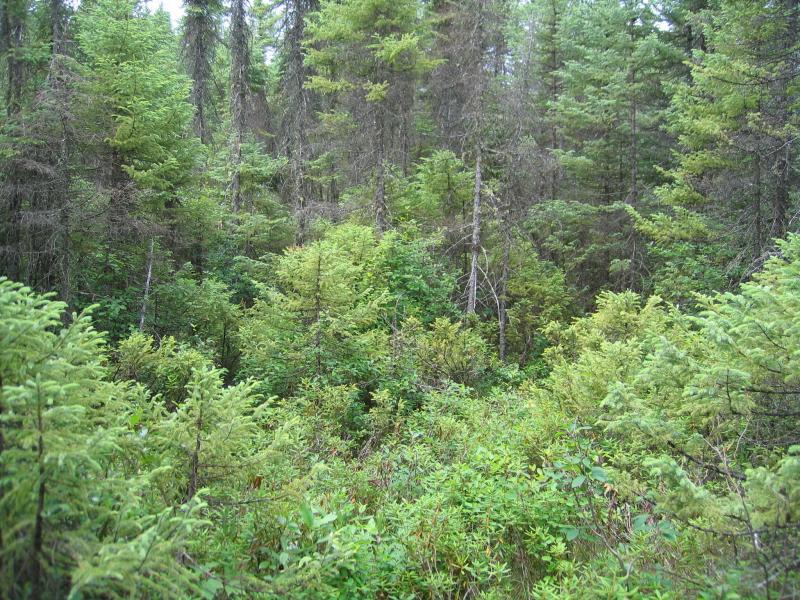 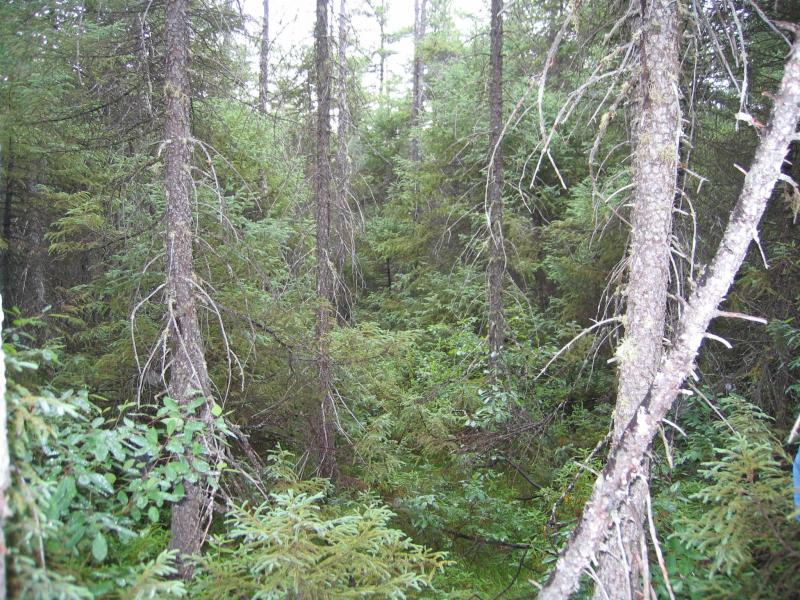 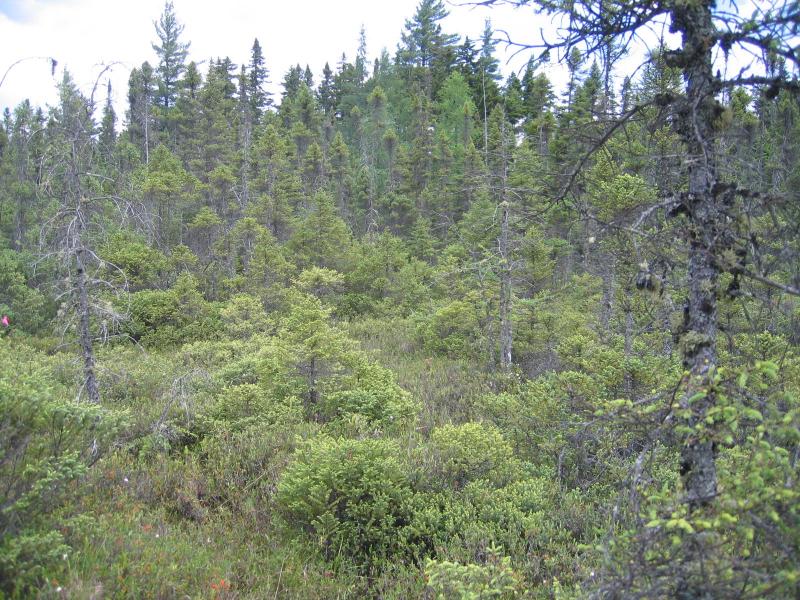 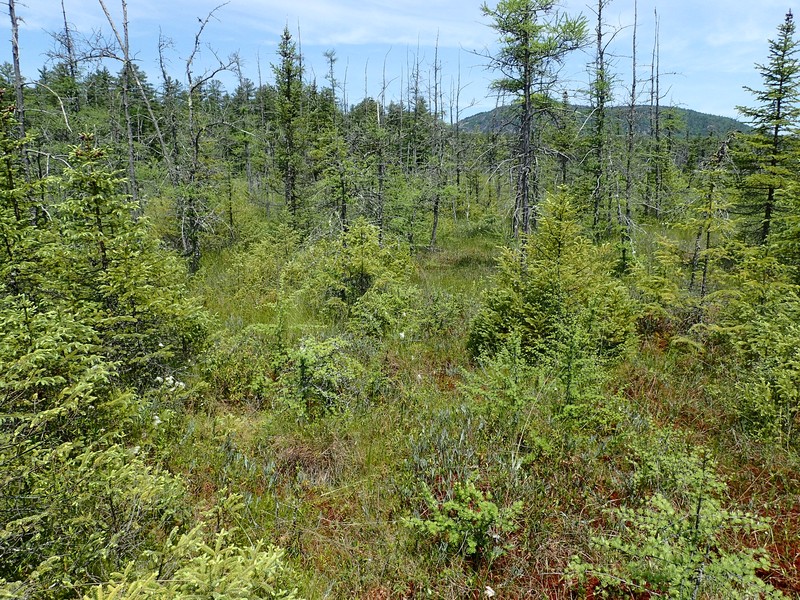 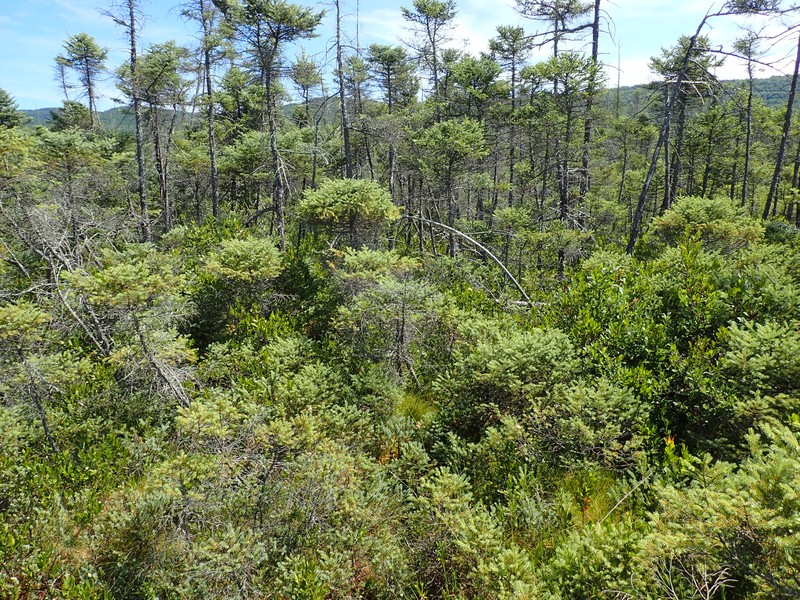 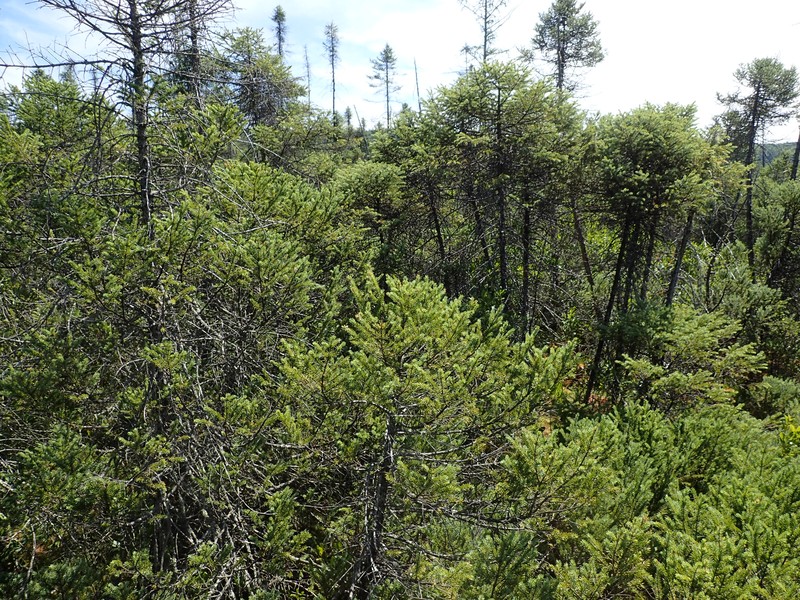 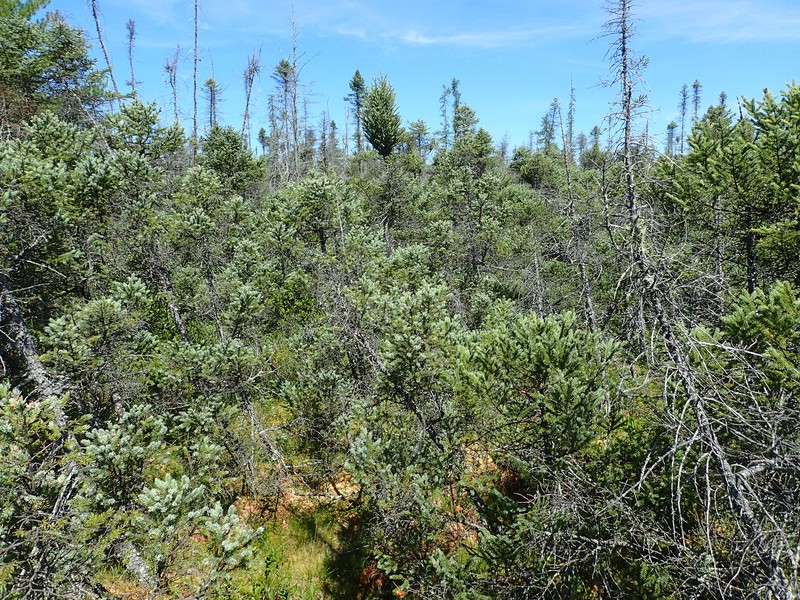 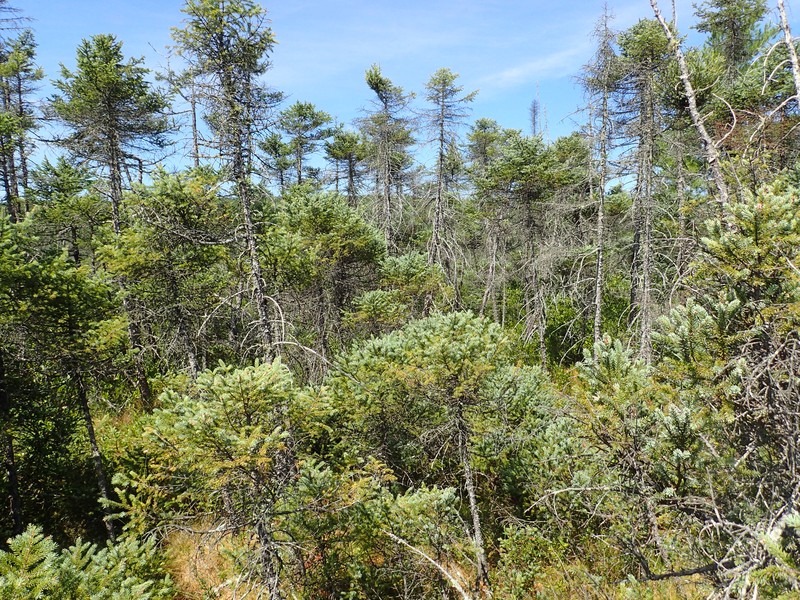 This figure helps visualize the structure and "look" or "feel" of a typical Black Spruce-Tamarack Bog. Each bar represents the amount of "coverage" for all the species growing at that height. Because layers overlap (shrubs may grow under trees, for example), the shaded regions can add up to more than 100%.

Information for this guide was last updated on: June 18, 2021