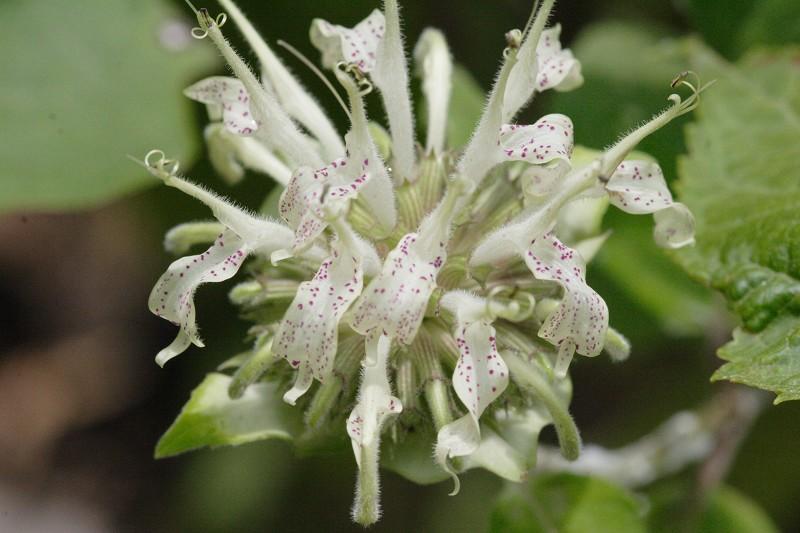 The first New York specimen of this species was collected way back in 1867 at Niagara Falls by Edwin Hunt (1837-1880), a professor of Natural Sciences at the Utica Academy who had a herbarium of 4000 specimens that was bought by Asa Gray. (New York State Museum records). This is our only species of Monarda with white flowers but they sometimes vary to pink.

There are 5 verified occurrences, all with low numbers, and 31 historical occurrences.

The short term trend is unknown as only two resurveys with population counts have been conducted since the 1980's. Those surveys documented a reduction in numbers to 1/3 to 1/5 the original population size.

The long term trend is apparently negative but few historical populations have been resurveyed.

Mowing and herbicide spraying along railroads threatens some populations. Loss of local ecotypes from crossbreeding with cultivated populations is also a threat.

Basil-balm is found throughout central and western New York. There is one record from Ulster County.

A flowering stem is required for positive identification of this species.

Monarda media has an unspotted red-purple corolla and bract blades tinged or suffused with purple and a much larger upper corollla lip (13-16mm). In contrast M clinopodia has a white to ochroleucous (rarely pink) corolla with a purple spotted lower lip and small upper lip 5-8 mm. M. fistulosa has a light purple (rarely purple to red-purple or white) corolla with its upper lip densely villous near its apex with hairs having pale septa vs. the upper lip abaxial surface not or only sparsely villous with hairs having red-purple septa (GoBotany 2015).

Flowering typically begins in early July and continues through mid-September.

The time of year you would expect to find Basilbalm flowering in New York.