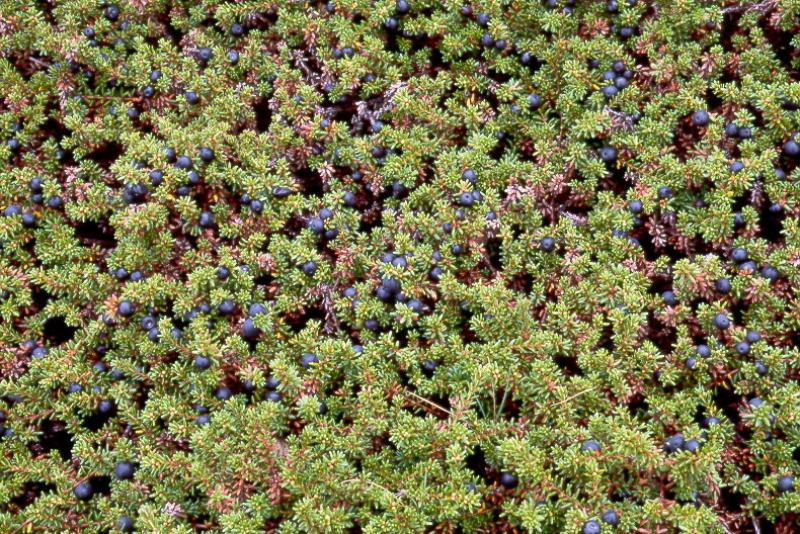 The genus name Empetrum comes from the Greek en, which means upon, and petros, which means rock (Fernald 1970). This name alludes to the way this species grows on rocks. The common name black crowberry refers to the black color of the fruits and makes reference to the fact that, at least in the arctic where this plant also grows, birds relish the fruits (Waller and DiGregorio 1997). This plant's Inuit name, paurngait, means "which looks like soot", and refers to the black berries (S. G. Aiken et al 1989).

In New York, this species occurs on many of the highest summits of the Adirondacks, in alpine meadows sometimes adjacent to krummholz. It is also known at least historically from slightly lower sites on rock ledges and outcrops, and perhaps a bog, in cool microclimates in the high peaks region of the Adirondacks. There is also one disjunct extirpated population that was known from a maritime site on eastern Long Island (New York Natural Heritage Program 2007). Exposed, peaty and rocky areas (Haines and Vining 1998). On rocks (Gleason and Cronquist 1991). Arctic regions, peaty soils in more southern locations, alpine areas of northern New England and New York (Fernald 1970).

Empetrum nigrum ssp. hermaphroditum occurs in the northern parts of Europe and Asia as well as Greenland and eastern North America, south to northern Minnesota, Michigan, the coast of Maine, the alpine areas of northern New England and New York, and formerly one disjunct on Long Island (Fernald 1970, Anderberg 1994, New York Natural Heritage Program 2007). Depending on the circumscription of this taxon it is also considered to occur in the arctic regions of western North America south to the alpine areas of northern California to southern Alberta (Fernald 1970).

Black crowberry is a very low trailing shrub that makes an attractive dense ground cover in the exposed alpine areas where it occurs. Its twigs, at least when young, have hairs with glands on the tips. The evergreen leaves are short and needle-like with tiny glandular teeth along the margins. The leaves are mostly without hairs and spread or reflex back from the braches where they arise. The small and inconspicuous flowers occur in the axils of the leaves. The fruits are about .25 to .35 inches in diameter, black, and sometimes have a thin white waxy coating (Fernald 1970, Gleason and Cronquist 1991).

This species is a trailing woody evergreen shrub. The twigs and branchlets especially when young are minutely stipitate-glandular and are not densely white-tomentose or white-villose. The leaves are evergreen, needle-like, and stiff. The flowers are mostly bisexual. The drupes are black and glaucous.

This species can be easily identified throughout the year when snow is not covering it, although, fruits make identification easier.

The other species of Empetrum (E. eamesii ssp. atropurpureum) that occurs in New York and can be present with E. nigrum ssp. hermaphroditum is superficially very similar. It differs in having twigs and brachlets white-tomentose or white-villous and not stipitate glandular, and drupes purple-black. Its new leaves have white hairs along the entire margin.

Harrimanella hypnoides is another alpine plant that is believed to be extirpated in New York. It perhaps could be mistaken for Empetrum nigrum ssp. hermaphroditum when vegetative due to its evergreen needle like leaves. It can be distinguished by its smaller size, its rough margined leaves that arise along the entire stem, and its showy, white, bell-shaped flowers at the tips of stems, which mature into dry capsules.

This plant starts to have fruits in July and these can last into the fall. Therefore, the best time to survey for this species is from July through late October although it can be distinguished vegetatively anytime during the growing season.

The time of year you would expect to find Black Crowberry vegetative, flowering, and fruiting in New York. 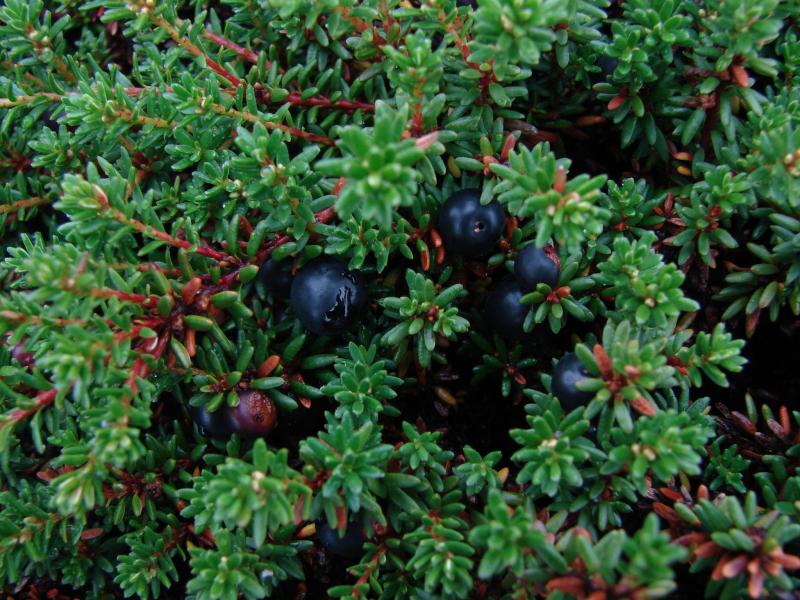 A. A. Anderberg (1994c) and V. Mirré (2004) found good separation of the red-fruited Southern Hemisphere plants (Empetrum rubrum Vahl ex Willdenow), although Li J. H. et al. (2002) and M. Popp et al. (unpubl.) did not. Nevertheless, we are treating E. rubrum as distinct from all North American taxa. Popp et al. did find that red-fruited, diploid E. eamesii was well separated from other taxa in the region, whereas, in terms of molecular genetics, the Southern Hemisphere red-fruited diploid E. rubrum has its closest connections in the Northern Hemisphere not to E. eamesii but to black-fruited Northern Hemisphere plants treated here as E. nigrum in the broad sense. The solution is to recognize the diploid E. eamesii, the diploid and tetraploid E. nigrum, and E. atropurpureum as a possible allotetraploid from diploid E. eamesii and a diploid E. nigrum. This leaves a great deal of variation within E. nigrum in the broad sense unaccounted for. Various hybrid combinations were alleged by D. Löve (1960); these require confirmation.

Anderberg, A.A. 1994. Phylogeny of the Empetraceae, with Special Emphasis on Character Evolution in the Genus Empetrum. Systematic Botany 19: 35-46.

Information for this guide was last updated on: October 25, 2019