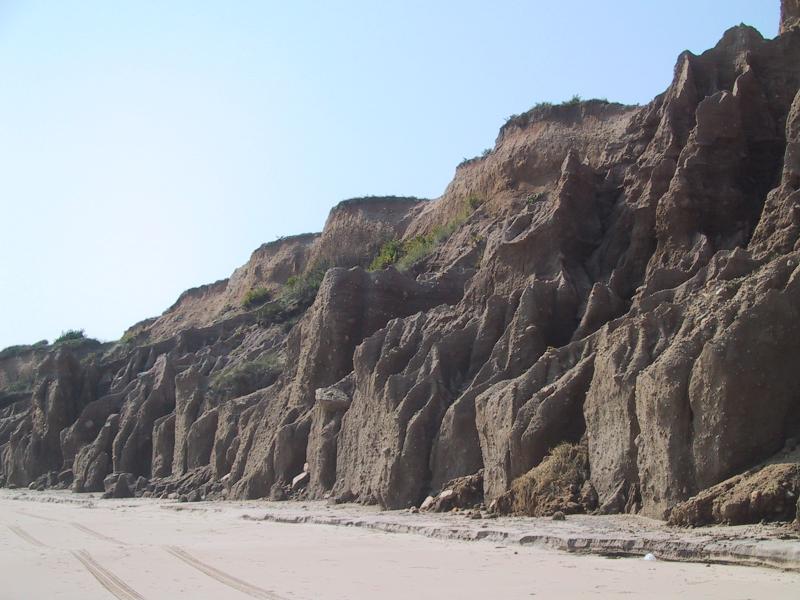 The planners of the Montauk Point Lighthouse were well aware of erosion. The government agents noted that "Montauk Point is washed by the sea in storms" and "wastes very fast." They erected the lighthouse at the extreme west end of the Turtle Hill plateau at a distance of approximately 300 feet from the bluff. Over the past 200 years approximately 200 feet of Montauk Point has been washed into the Atlantic Ocean. Today the lighthouse stands less than 100 feet from the edge of the maritime bluff.

There are an estimated 5 to 30 extant occurrences statewide. One currently documented occurrence has good viability and is located on public conservation land. The community is currently known from the Coastal Lowlands ecozone of eastern Long Island in Suffolk County. The overall trend for the community is suspected to be slightly declining due to recreational overuse and coastal development.

Although the number of maritime bluffs may have increased slightly when formerly long, continuous examples were fragmented by development, their acreage in New York has probably declined in recent decades as a result of coastal development and recreational overuse.

Although the number of maritime bluffs in New York may have increased slightly from historical numbers when formerly long, continuous examples were fragmented by development into numerous large and small stretches, their aerial extent and viability are suspected to have declined substantially over the long-term. These declines are likely correlated with coastal development and associated changes in connectivity, tidal hydrology, and natural processes.

The primary threat to maritime bluffs in New York is likely to be recreational overuse; specifically, climbing and sliding on the cliffs increases erosion. Invasive exotic species that appear on the bluffs include rugosa rose (Rosa rugosa) and Oriental bittersweet (Celastrus scandens). In some cases, exotics are being planted to stabilize the dunes. Additional threats include fragmentation of bluffs by development; stairways for beach access; and barriers to connectivity between the open ocean, the beach, and the bluffs. Broad threats to maritime beach dynamics also threaten maritime bluffs. Hydrologic alterations to tidal dynamics, shoreline fragmentation and hardening, altered sediment budgets, and management practices like beach replenishment affect the natural cycles of sand deposition and attrition and subsequently change the rate of erosion of the bluffs.

Maintain the dominant ecological processes responsible for keeping this dynamic community in disclimax. Natural disturbances, including wave erosion and strong offshore winds, should be expected to lead to slumping, cliff retreat, and sea cave formation. Prevent recreational overuse and encourage the public to stay on marked trails. In particular, continue to restrict sliding and climbing on the face of the bluffs using signage and fencing. In places where trails run directly along the top edge of maritime bluffs, those trails should be re-routed away from the edge and split rail fences could be used to direct visitors to designated overlooks. Because the face of the bluffs can be expected to migrate inland, it is important to protect adequate open space to accommodate such change. Avoid planting invasive exotic species to stabilize the bluffs; if stabilization of this inherently unstable community is necessary, select native plants, perhaps American beachgrass (Ammophila breviligulata). Prevent the spread of invasive exotic species into the bluffs through appropriate direct management and by minimizing potential dispersal corridors, such as beach access trails and stairways.

A study could investigate the effects of sea level rise and changes in oceanic dynamics with global climate change on the dynamic erosive processes of this community.

This community is currently known from the Coastal Lowlands ecozone of eastern Long Island in Suffolk County. It primarily occurs on the eastern end of Long Island, along the south shore, but also appears in discontinuous patches along the north shore and east to Plum Island and Fishers Island. It may extend west into Nassau County.

A sparsely vegetated community that occurs on vertical exposures of unconsolidated material, such as small stone, gravel, sand, and clay, that is exposed to maritime forces, such as water, ice, or wind. There are very few woody species present because of the unstable substrate. The most abundant species are usually annual and early successional herbs. These bluffs are adjacent to maritime and marine communities and are actively eroded by oceanic forces.

The maritime bluff is comprised of areas of unvegetated, near vertical morainal sand cliffs, and less steep (about 45 degrees) areas of slumped bluff-face at the base of the bluff that support American beachgrass (Ammophila breviligulata), seaside goldenrod (Soligago sempervirens), and bayberry (Myrica pensylvanica).

Known examples of this community have been found at elevations between 3 feet and 77 feet.

These dramatic bluffs are scenic year round. Visit during the summer and enjoy the beach below. 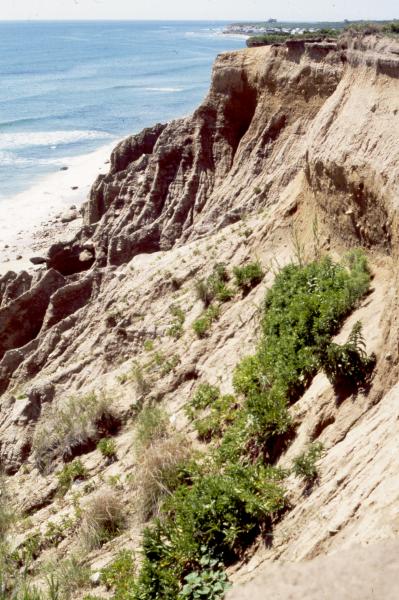 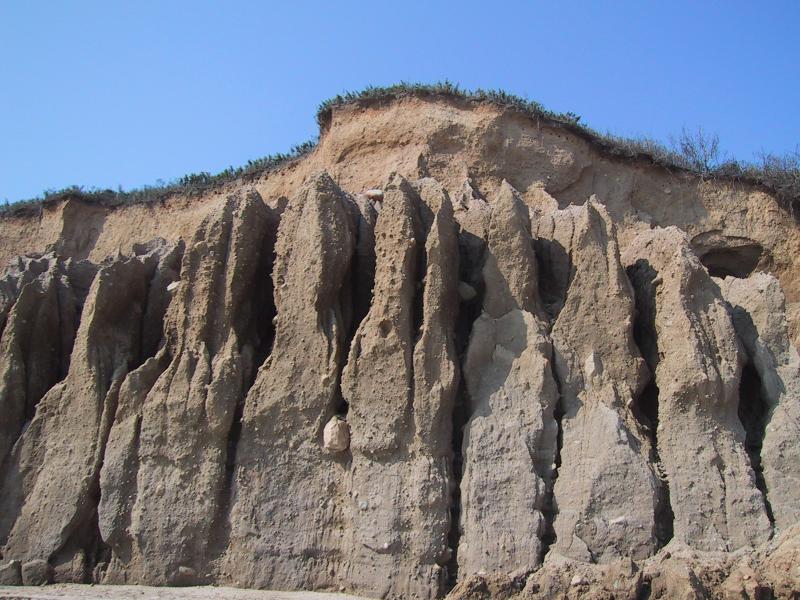 This figure helps visualize the structure and "look" or "feel" of a typical Maritime Bluff. Each bar represents the amount of "coverage" for all the species growing at that height. Because layers overlap (shrubs may grow under trees, for example), the shaded regions can add up to more than 100%.