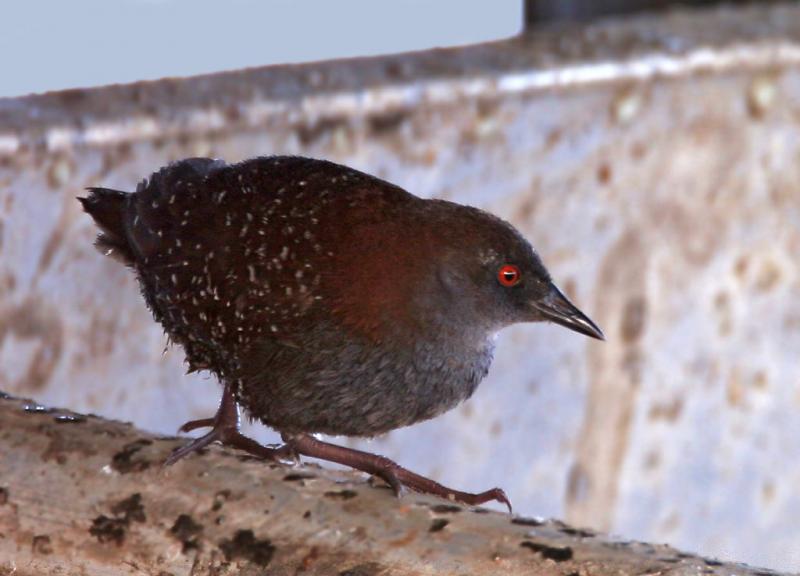 State Protection
Endangered
Listed as Endangered by New York State: in imminent danger of extirpation in New York. For animals, taking, importation, transportation, or possession is prohibited, except under license or permit. For plants, removal or damage without the consent of the landowner is prohibited.
Federal Protection
Threatened; Migratory Bird Treaty Act
Listed as Threatened under the Federal Endangered Species Act; The Migratory Bird Treaty Act implements various treaties and conventions between the U. S. and Canada, Japan, Mexico and the former Soviet Union for the protection of migratory birds. Under this Act, taking, killing, or possessing migratory birds, including nests or eggs, is unlawful unless specifically permitted by other regulations.

The Black Rail is the smallest rail in North America. In New York, there is only one known breeding population, making this species one of the state's rarest breeding birds (McGowan and Corwin 2008).

The first (1980-85) and second (2000-05) Breeding Bird Atlas reported only one location of Black Rails in the state, so there was no known change in distribution in that time period (Andrle and Carroll 1988, McGowan and Corwin 2008). Between the two atlases, there were reports of Black Rails at a few other sites on the south shore of Long Island including four birds calling from Moriches Inlet in Suffolk County and one record from Westchester and Jefferson Counties (Levine 1998, McGowan and Corwin 2008). It is unknown if any of these sites are regularly occurring breeding locations.

Since New York is at the northern extent of the Black Rails eastern range, this species is likely always to have been rare in the state. Eaton (1910) was aware of five specimens from New York, but the species was not confirmed as a breeder in the state until the discovery of a nest with eggs by Carleton in 1937 at Oak Beach in Suffolk County (McGowan and Corwin 2008, Levine 1998). Another breeding record was found in Nassau county in 1937 and the last in 1940. The species was rediscoved at the original Oak Beach site in 1968 (Post and Enders 1969). Rangewide declines in Black Rail population numbers are a result of the rapic loss of coastal saltmarsh habitat along the east coast (Erwin et al. 2004) from weather, development, eutrophication, and conversion for agriculture.

Black Rails consistently breed in only one location along the southern coast of Long Island. Due to their rarity, they are highly susceptible to extirpation through stochastic, or random, events such as flooding, a low year of nesting productivity, high predation, or disease. Besides rarity in itself, habitat loss is the other major threat to this species' persistence in the state. The loss of coastal saltmarsh habitat is occurring at dramatic rates along the east coast (Erwin et al. 2004). The spread of an invasive plant called common reed (Phragmites australis) into high marsh habitat may further degrade habitat for the rails. Studies have shown that there is lower diversity and abundance of macroinvertebrates in Phragmites dominant marshes compared to marshes consisting primarily of native Spartina cordgrasses (Angradi et al. 2001). This in turn affects the abundance of prey for Black Rails because they consume the macroinvertebrates and other invertebrates that consume the macroinvertebrates. However, Phragmites has been present since 1950 at the one known breeding site for Black Rails in New York, so the rails may have some tolerance to it. Ditching and draining of coastal saltmarsh for agriculture and mosquito control throughout much of the 20th century created long-term habitat loss, the effects of which are still present today. Changes to hydrologic processes resulting from coastal development and increases in sedimentary sulfide from human development are also believed to play primary roles in the decline of coastal saltmarsh (Montalto and Steenhuis 2004, Kolker 2005). Finally, global climate change is a significant long-term threat to the persistence of Black Rails in NY. Flooding from extreme weather events could decimate the breeding population in New York in a matter of years. Coastal development and urbanization limits the inland expansion of coastal saltmarsh and, coupled with rising sea-levels, will likely continue to shrink saltmarsh habitat.

Efforts to restore native Spartina marsh should take into account Black Rail breeding season and available habitat since Black Rails are especially susceptible to predation when forced from marsh habitat (Eddleman et al. 1994). The use of fire to control the spread of invasives in marshes could be damaging to Black Rail habitat or could destroy nests and young if the burns are not timed properly. Efforts to restore and protect coastal high saltmarsh would benefit this species (Eddleman et al. 1994).

Research is needed to determine the population and trends of the single reliable breeding location in the state. Many aspects of the species biology and life history remain understudied, including territoriality, social interactions, and foraging behavior (see Eddleman et al. 1994). Information on diet is limited (Eddleman et al. 1994). Studies on food requirements would be especially beneficial in habitats that are changing due to the spread of invasive species and climate change. Further inventory of saltmarshes on the south shore of Long Island and follow-up visits to incidental and suspected breeding locations may identify new breeding sites. Research into methods to retain current saltmarsh and restore areas that have been lost could benefit this species in the future.

Black Rails occupy coastal saltmarsh habitat along the south shore of Long Island, New York. They are generally found in higher marsh habitat than other rail species as they require lower water depths for breeding. Rangewide habitats also include shallow freshwater marsh and wet meadows (Eddleman et al. 1988). In New York, they are known to nest in saltmeadow cordgrass (Spartina patens) (Bull 1964) and are suspected to breed in saltwater cordgrass (Spartina alterniflora) (Post and Enders 1969). Black Rails are considered to be an area-sensitive species, requiring more than 50 ha of marsh habitat to breed, although their territories tend to be smaller than 5 ha (Wilson et al. 2007).

Black Rails are known to breed only on the south shore of Long Island and have been reported in coastal Westchester County.

Black Rails breed locally in west-central and coastal southwestern California, along the lower Colorado River in California and Arizona, in Kansas, Ilinois, and Ohio, along the Atlantic coast from New York south to southern Florida, along the Gulf Coast from Texas to Florida, in Belize, and in South America in western Peru, Chile, and western Argentina (AOU 1998, Eddleman et al. 1994). Recorded in summer (possibly breeding) Missouri, northwestern Indiana, extreme northern Baja California, Veracruz, Cuba, Jamaica, Hispaniola, and Puerto Rico (AOU 1998), though probably extirpated by mongoose in Puerto Rico (Raffaele 1983). There are a few records in Canada but no confirmed breeding. The nonbreeding range includes the California coast, southeastern California, the Gulf Coast from Texas to Florida, the Atlantic coast north to North Carolina, and the breeding range in Belize and South America (AOU 1998).

The Black Rail is the smallest rail in North America. Adults are blackish-gray with the top of the head being darker than the surrounding plumage (more evident in females). Males have a chestnut-colored nape. Adults have black or dark gray bills and red eyes.

The Black Rail is the smallest rail in North America and is only about the size of a sparrow. Both males and females are similar in size with adults ranging from 10-15 cm, a wingspan of 22-28 cm, and weighing 35 g. Black Rails appear gray to blackish-gray. The top of the neck and upper back are chestnut-colored and the top of the head is a darker gray than surrounding plumage (this is more evident in females) (Eddleman et al. 1994). Adults have the unique characteristic of having red eyes. Black Rails are best identified by their call which is described as "kickee-doo" or "kic-kic-kerr". They can also make a vocalization similar to the "kicker-calls" of Virginia Rails (Rallus limicola). When disturbed, Black Rails make an agitated growl noise described as a "grrr", "brrr", or "churr" generally repeated three times in a sequence (Eddleman et al. 1994, Weske 1969, Wilbur 1974, Repking 1975, Kerlinger and Sutton 1989). Females at nests give a scolding call described as "ink-ink-ink-ink" or "nk-nk-nk-nk" and a similar call for males is "kik-kik-kik-kik" or "kuk-kuk-kuk-kuk" (Eddleman et al. 1994, Reynard 1974, Flores and Eddleman 1991, Wayne 1905). Females make a "croo-croo-croo" or "who-who-whooo" call rarely (Eddleman et al. 1994, Wayne 1905, Post and Enders 1969, Reynard 1972, Repking 1975, and Flores and Eddleman 1991).

Black Rails are secretive marsh birds that are generally active at night. They are very difficult to observe without disturbing them. Black Rails are best identified by their call which is described as "kickee-doo" or "kic-kic-kerr". Observers should not disturb breeding individuals by playing rail calls at known breeding locations.

Adult males are easiest to identify by their call.

Black Rails are secretive marsh birds that are generally active at night. Their primary mode of transportation around their habitat is by running along the ground. They may use pathways created by other animals like mice (Weske 1969). They are capable of swimming short distances (Weske 1969). They are typically reluctant to fly and when they do, flights are short. During migration, however, they are fast and strong fliers (Eddleman et al. 1994). Black Rails live in dense cover and cease calling when predators are nearby. They may be depredated by herons especially during high tides, but also owls, mammals, and hawks (Eddleman et al. 1994).

Black Rails consume a variety of small aquatic invertebrates and seeds (Eddleman et al. 1994). Their diet appears to be somewhat opportunistic and information regarding diet is limited to a few studies of few individuals. The diet of Black Rails may depend on the season and vary regionally as well. Based on studies of gut contents, food items that are known to be consumed include seeds such as those from bulrush and cattails, spiders, and insects such as beetles, weevils, ants, earwigs, and grasshoppers (Weske 1969, Flores and Eddleman 1991, Eddleman et al. 1994). Snails, amphipods, and small crustaceans have also been found (Huey 1916, Weske 1969, Flores and Eddleman 1991).

Although they are active throughout the summer, Black Rails call most frequently early in the breeding season in May and June. Extreme dates reported in New York are April 19 and January 6.

The time of year you would expect to find Black Rail active and reproducing in New York.

California Department of Fish and Game (CDF&G). 1990. 1989 annual report on the status of California's state listed threatened and endangered plants and animals. 188 pp.

Montalto, F.A. and T.S. Steenhuis. 2004. The link between hydrology and restoration of tidal marshes in the New York/New Jersey Estuary. Wetlands 24: 414-425.

Raffaele, H. A. 1983a. A guide to the birds of Puerto Rico and the Virgin Islands. Fondo Educativo Interamericano, San Juan, Puerto Rico. 255 pp.