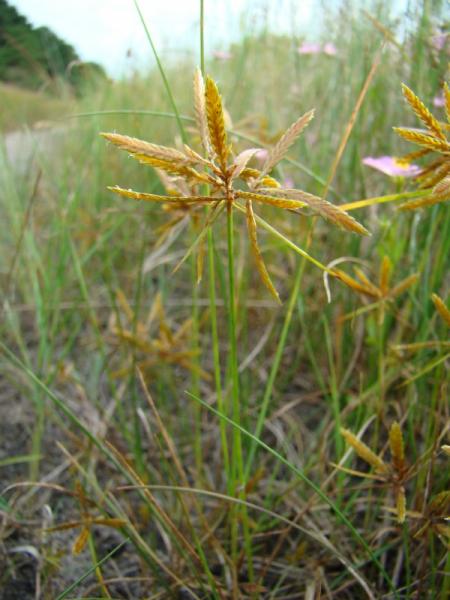 While mostly known from Suffolk County there were two collections of this rare flatsedge from Queens County in the 1890s. It was not collected in Queens again until 2004 when it was found around a small pond near the South Shore of Long Island, a span of over 100 years between sightings!

There are six existing populations but only two of them have over 100 plants. One population from 1989 has been overrun by Phragmites. There are seven records from the early 1900s through 1975 that have not been rediscovered but habitat still remains. Four populations from Western Long Island and Staten Island are now gone because they occurred in natural areas which no longer exist.

One population discovered in 1989 has been destroyed by Phragmites and other populations are threatened by it. Most populations have not been resurveyed and their short-term status is unknown.

This plant has always been rare in New York but the populations have declined in the last 100 years and may continue to decline. Many saltmarshes on Western Long Island and the New York City area have been developed or drained and habitat no longer exists. Phragmites is affecting present-day saltmarshes.

The failure to control the invasion of Phragmites and the failure to provide buffers from nearby developments that affect the quality of runoff and remove natural buffers are the largest threats.

Research is needed to discover habitat preferences that would allow the augmentation of existing populations.

This flatsedge was historically known from Staten Island and across Long Island but current records exist only in Queens and eastern Suffolk counties including Fishers Island.

This flatsedge occurs along the Atlantic and Gulf coastal plain from southern Maine to Florida. It is also common inland from Virginia to Missouri and Oklahoma south to Texas.

Coast Flatsedge is a perennial, grass-like herb. Its stems are slender (up to 2 mm wide), 3-sided or more or less rounded, and up to 45 cm tall. It has 6 to 10 flat or V-shaped leaves, 1 to 4 mm wide and up to 30 cm long. The infloresence is subtended by 4 to 6 horizontal to ascending leafy bracts, and consists of a single spike. The spike may be either a single dense cluster of (15 to 30) spikelets or have the spikelets held on from 1 to 8 rays (branches) up to 3 cm long. The pistillate scales are straw-colored to light brown with a green stripe in the middle and a pointed tip. The fruit are laterally compressed, biconvex, minutely pitted achenes about 1 mm long (FNA 2002).

Coast Flatsedge is best identified when in mature fruit.

The time of year you would expect to find Coast Flatsedge fruiting in New York. 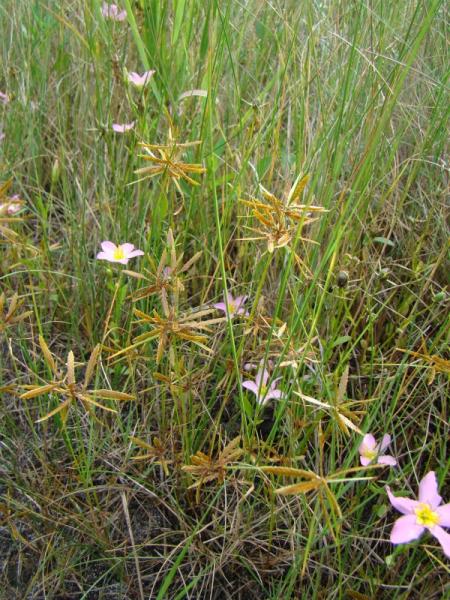 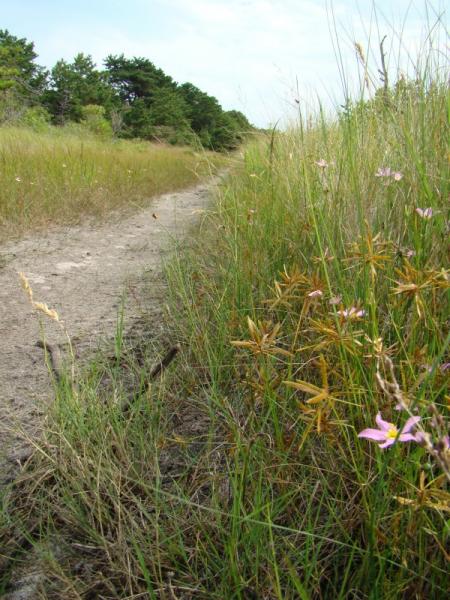 Information for this guide was last updated on: November 4, 2011