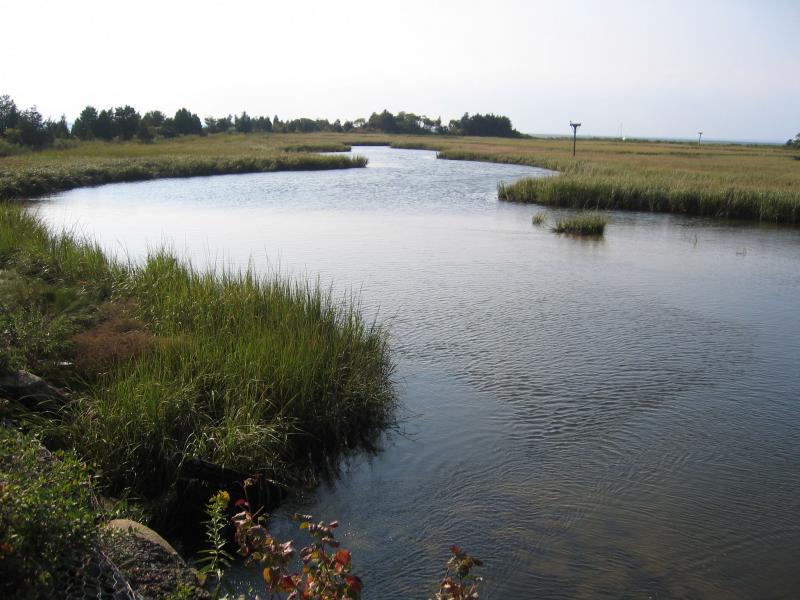 Changes in salinity and temperature can influence migration patterns of fish within tidal creeks. Different species of fish are specialized for different levels of salinity. Fish that typically live in high salinity areas migrate into saltwater tidal creeks with high tide, following the increasing salinity level. Fish that spend most their time in the lower salinity areas of brackish or freshwater tidal creeks migrate farther upstream when the tides come in to avoid a sudden increase in salinity level. Some species of fish are able to tolerate low, mid, and high salinity areas. Some factors beyond salinity influencing the distribution of fish in tidal creeks include availability of food and presence of predators.

There are estimated to be about 60 occurrences statewide. The several documented occurrences have good viability and are protected on public or private conservation land. The community is restricted to salt marsh complexes along the seacoast in the Coastal Lowlands ecozone and along Long Island Sound in the Manhattan Hills ecozone. The current trend of the community is thought to be declining. The primary threats to the community are shoreline development, marsh ditching, channel dredging and filling, declining water quality, diking and impoundment, changes to tidal hydrodynamics, and invasive species.

Over the last several decades, there have been significant decreases in the area of extent, number, and ecological integrity of low salt marshes in New York. Saltwater tidal creeks, which drain these marshes, may have suffered equally drastic declines, particularly from direct dredging and filling for urban development. It is possible that the number and acreage of this community may have increased in recent decades as mosquito ditches were cut into low salt marshes. Even if this is true, the morphology, health, and functionality of these systems has declined substantially with ditching (which changed sinuous drainages into an angular grid), declining water quality, and changes in tidal hydrodynamics.

The number, aerial extent, and integrity of salt marshes and associated saltwater tidal creeks in New York are suspected to have declined substantially from their historical state. These declines are likely correlated with coastal development; dredging, ditching, and filling; and changes in hydrology, water quality, and natural processes.

Where practical, establish and maintain a salt marsh and tidal creek buffer to reduce storm-water, pollution, and nutrient run-off, while simultaneously capturing sediments before they reach the creek. Buffer width should take into account the erodibility of the surrounding soils, slope steepness, and current land use. If possible, minimize the number and size of impervious surfaces in the surrounding landscape. Avoid habitat alteration within the creek and surrounding landscape. For example, roads should not be routed through the salt marsh and tidal creek buffer area. If the creek must be crossed, then bridges are preferred over filling and culverts. Restore past impacts, such as removing obsolete impoundments and ditches in order to restore natural tidal hydrodynamics. Prevent the spread of invasive exotic species into the creek through appropriate direct management and by minimizing potential dispersal corridors. Restoration and monitoring protocols for salt marsh complexes are available (Niedowski 2000).

Strive to minimize or eliminate hardened shorelines and maintain low-sloped shorelines within the tidal zone to increase overland sediment input. Maintain functional connectivity between the open ocean and bays with salt marsh complexes to enable full tidal flushing during each tidal cycle. For example, barriers such as railway causeways should have numerous culverts to allow sufficient hydrologic connectivity. If flow restriction devices are needed, those that are calibrated for local tidal hydrology can be used. Avoid dumping dredge spoil onto salt marshes and associated tidal creeks. This community is best protected as part of a large salt marsh complex. Protected areas should encompass the full mosaic of low salt marsh, high salt marsh, marine intertidal mudflats, saltwater tidal creek, salt panne, and salt shrub communities to allow dynamic ecological processes (sedimentation, erosion, tidal flushing, and nutrient cycling) to continue. Connectivity to brackish and freshwater tidal communities, upland beaches and dunes, and to shallow offshore communities should be maintained. Connectivity between these habitats is important not only for nutrient flow and seed dispersal, but also for animals that move between them seasonally. Development of site conservation plans that identify wetland threats and their sources and provide management and protection recommendations would ensure their long-term viability.

Sufficient quantitative data on the characteristic flora and fauna of saltwater tidal creeks needs to be collected and the effects of invasive exotic plants and animals on the community needs to be investigated.

Restricted to salt marsh complexes in sheltered areas of the seacoast in the Coastal Lowlands ecozone and along the Long Island Sound in the Manhattan Hills ecozone in Bronx, Westchester, Kings, Queens, Nassau, and Suffolk counties.

This community is assumed to occur along the Atlantic coastline from Nova Scotia and New Brunswick south to Cape Hatteras, North Carolina.

The aquatic community of a shallow, continuously semidiurnally tidally flooded creek with submerged areas averaging less than 2 m (6 ft) deep at low tide. The water is typically saline (18 to 30 ppt or greater) to brackish (0.5 to 18 ppt). Varying depth zones and flow microhabitats often result in a diverse array of ecological associations. Water levels fluctuate with the tides and two community depth zones are typically encountered: 1) the subtidal, permanently flooded, portion of the creek and 2) the intertidal portion including banks and midchannel bars or terraces exposed at low tide. Typical flow microhabitats in a fully-developed creek include abundant slow-flowing pools connected by runs with localized turbulent, fast-flowing riffles. Typical examples drain the waters of semidiurnally tidally flooded coastal salt marshes of the back barrier or finger marsh type. Most tidal creeks flow in a very sinuous pattern through a salt marsh. Although the vertical banks of the creek regularly erode and slump into the creek bottom, the position of the creek bed in the marsh is fairly stable and oxbows are rare. The sinuous meanders of the creek are not formed by recent erosion of the marsh, rather they are thought to be relict drainage channels that were active in tidal flats when salt marsh grasses first became established. Tidal creek pools have silty substrate with abundant beds of widgeon grass and tubed weed and the characteristic fauna hairy sea cucumber, American eel, grass shrimp, and eastern mud snail. Runs have sandy to gravelly substrate supporting marine algae species including tubed weed, graceful red weed, green fleece (Codium fragile), and a common exotic marine green algae; benthic marine fish such as naked goby (Gobiosoma bosci) and northern pipefish (Syngnathus fuscus); and many marine mollusks. Riffles have gravelly to cobbly bottoms with macroalgae beds of hollow green weed (Enteromorpha spp.), benthic marine fish such as naked goby, and marine mollusks such as common Atlantic slippershell. Intertidal peaty banks of creeks in salt marshes, especially in pools and runs, are characterized by abundant ribbed mussel (Modiolus demissus), mummichog, and killifish.

Known examples of this community have been found at elevations between -4 feet and 6 feet.

Saltwater tidal creeks can be accessed during high tide with a canoe; vegetation of the surrounding low salt marsh is best observed during midsummer. 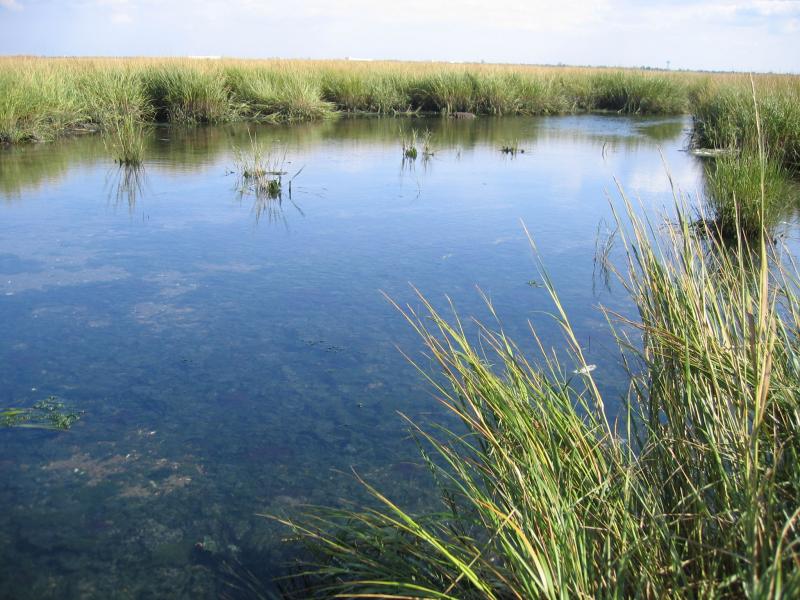 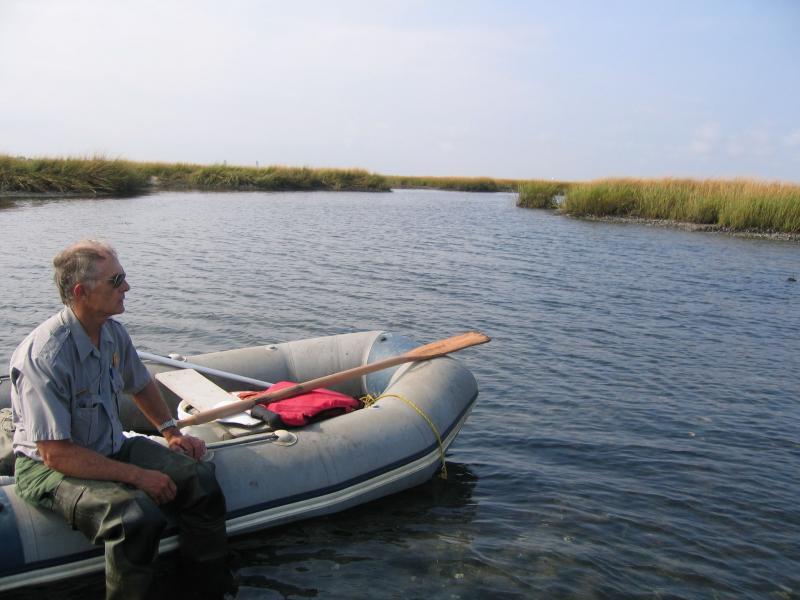 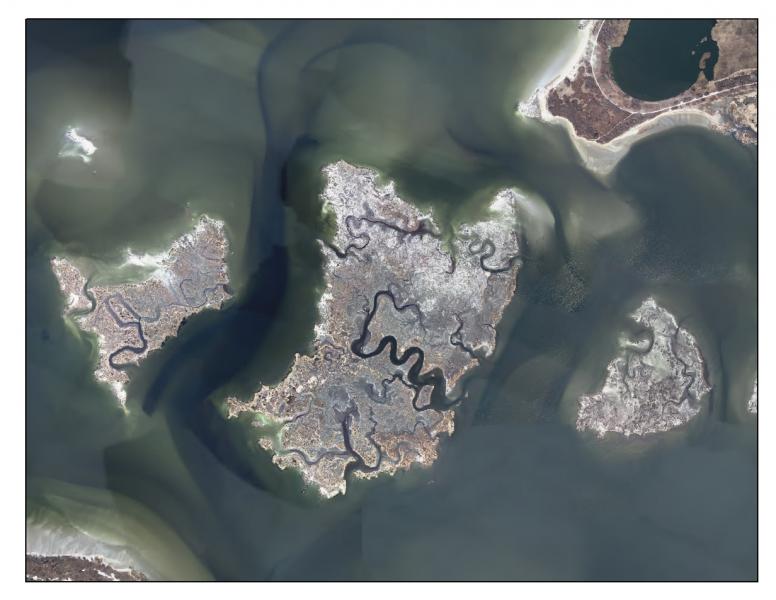 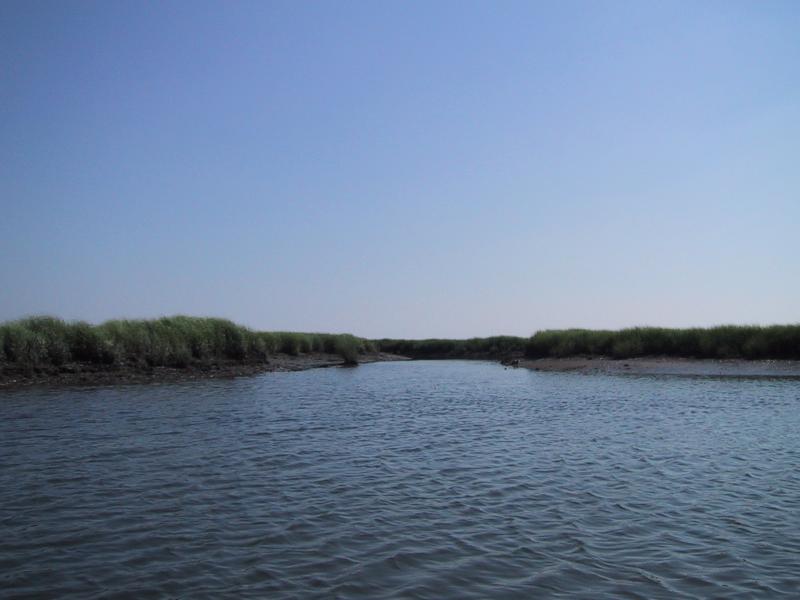 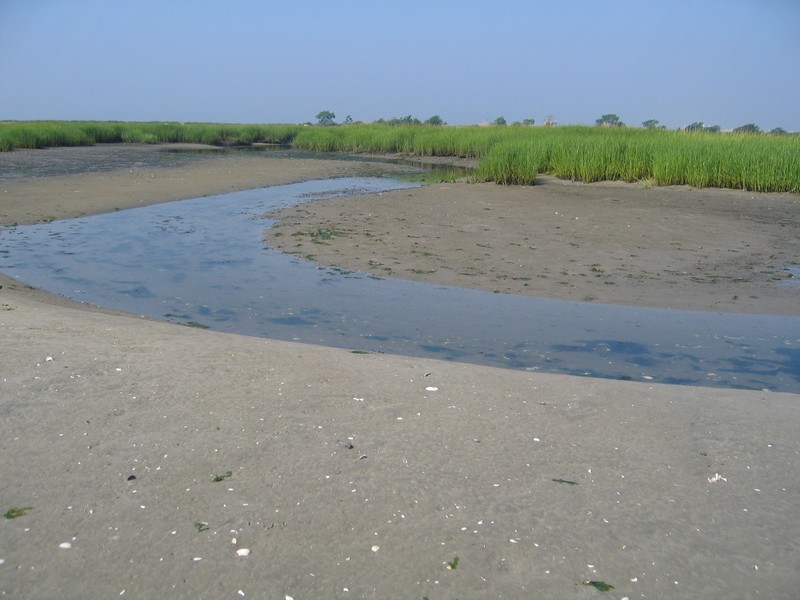 This figure helps visualize the structure and "look" or "feel" of a typical Saltwater Tidal Creek. Each bar represents the amount of "coverage" for all the species growing at that height. Because layers overlap (shrubs may grow under trees, for example), the shaded regions can add up to more than 100%.