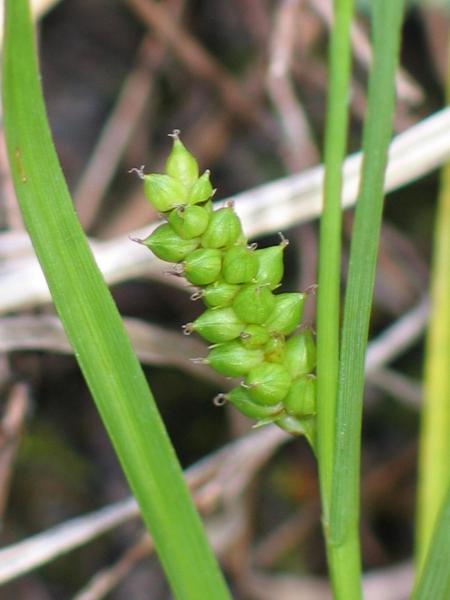 The specific epithet crawei is named after Ithamar Bingham Crawe, 1792-1847, who discovered this plant (Fernald 1970). Valcour Island, located in Lake Champlain near Plattsburgh, is the best place in New York to find Carex crawei.

There are nine known populations, but three of these only have a few plants. The largest populations have over a 10,000 stems. These are primarily restricted to limestone pavement areas and other types of sites associated with calcareous bedrock. This type of habitat is very limiting. Some of these sites face battles with various invasive species. There are a few historical sites and the possibility that this plant has been overlooked. More survey work is needed at the sites with small populations reported, as well as at sites where habitat conditions seem suitable.

Currently there is no real threat to any of the known populations of C. crawei. Some potential threats include trampling by hikers at one population and heavy grazing and ATV use at another population. A third population that occurs in a rich fen appears to be doing really well in an old path that is no longer in regular use. As the old path fills in with vegetation this population may become less common and perhaps reflect pre-disturbance levels.

No management is currently needed but monitoring should be done to see if ATV use or trampling by hikers is damaging populations. If this is determined to be occurring, then efforts should be made to protect these populations from these threats.

Carex crawei is known from western, north-central, and northern New York. It is mostly widely scattered in isolated populations but in Jefferson County just east of Lake Ontario there are a number of populations that occur close together.

Carex crawei is a wide ranging species but is rare or local except in a few areas. It occurs from British Columbia east to Quebec and Newfoundland south to New Jersey, Virginia, Georgia, Mississippi, Arkansas, Oklahoma, Wyoming, Utah, and Washington (Cochrane and Naczi 2002).

Crawe's sedge is a grass-like perennial that has long rhizomes and grows in patches. Stems mostly arise singly from the rhizomes and are 2-40 cm tall. Leaves are strap-like, clustered near the bases of the plants, and are 1.8-4.4 mm wide. Towards the apex of the stems are 3-5 narrowly cylindrical flower/fruit clusters (spikes). The terminal spike is composed of male flowers while the other spikes are composed of female flowers. The female flowers mature into fruits (perigynia) which are yellowish green to pale brown and 2.2--3.7 mm long (Cochrane and Naczi 2002).

Carex crawei is long rhizomatous and somewhat colonial. Leaves are 1.5-4.4 mm wide, thick, and light green. Culms are 2-30(-40) cm long and solitary or rarely in groups of 2. The terminal spike is staminate, occassionally has a short additional one just proximal, and is on a peduncle (0.4-)0.9-7.6(-9.1) cm long. There are 2-4 lateral pistillate spikes which are 5-27 mm long and widely separated. The lowest spikes originate in the lower part of the culms and sometimes from near the bases of the plants. Bracts are usually shorter than the culms. Perigynia are yellowish-green to pale brown and 2.2-3.4(-3.7) mm long with a beak 0.1-0.3 mm long. The apex of the beak is entire or has minute teeth up to 0.1 mm long (Mackenzie 1931-1935, Cochrane and Naczi 2002).

Carex crawei is easiset to identify when the perigynia are just immature to mature but are not easily shedding.

Carex crawei is a fairly distinctive sedge. Its long rhizomatous and non-cespitose habit separates it from most other closely related species. It can also be distinguished from the closely related C. granularis by its longer staminate peduncles and lowest pistillate spikes arising on the lower half of the stems. In comparison, C. granularis has a shorter staminate peduncle and the lowest pistillate spikes arise on the upper half of the stems. Some members of section Paniceae grow in a similar habitat to C. crawei and may appear somewhat similar due to their elongated rhizomes. Members of section Paniceae usually have pistillate spikes with perigynia less densely arranged and with less that 25 perigynia per spike. In comparison, C. crawei has pistillate spikes with perigynia more densely arranged and with at least 25 perigynia per spike.

Carex crawei starts to produce immature perigynia in late May or early June. These mature and persist till mid July or a little later. During the later part of this season the perigynia are starting to shed easily. Therefore, the best time to survey for this species is June through early July.

The time of year you would expect to find Crawe's Sedge fruiting in New York. 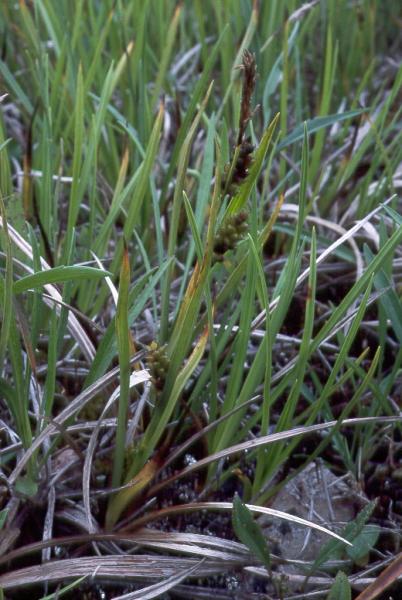 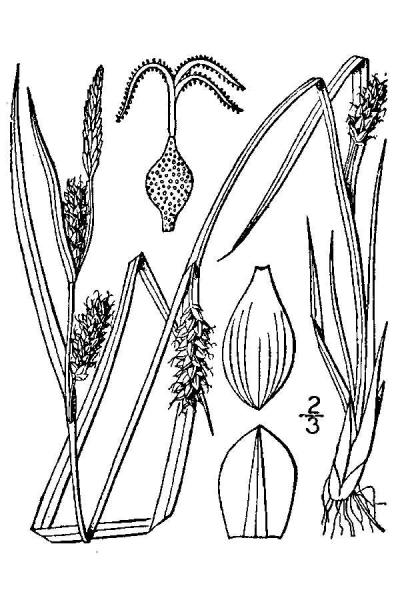 Some C. crawei specimens from New York have perigynia characteristics that approach the similar C. microdonta. Carex microdonta is known only form the southern United States. Carex crawei is in section Granulares. This section is considered to be monophyletic and closely related to sections Careyanae and Griseae (Cochrane and Naczi 2002).