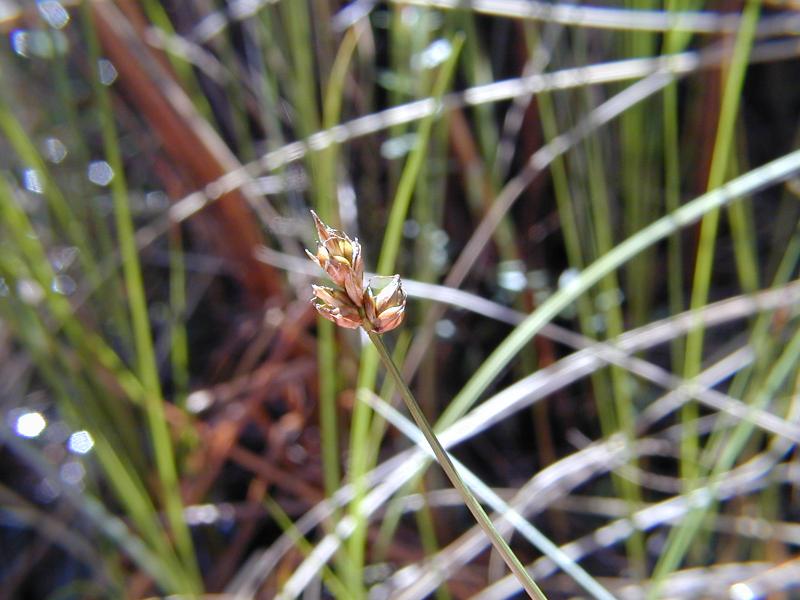 The name chordorrhiza means with cord-like roots (Fernald 1970). This is probably in reference to the vegetative stems which become prostrate and root at the nodes. As they become buried by mosses and other plants they appear like rhizomes (Reznicek and Catling 2002).

There are at least fourteen known populations and equally as many historical locations. Most of these are located within Oswego County where many peatland habitats exist. Other populations are present in Warren, Wyoming, and Cattaraugus Counties. This plant is typically found in higher quality inland poor fens and similar habitats. These are relatively well protected, although succession is a possible threat. Many of the populations are large, including some with upwards of 10,000 culms. This sedge is relatively easy to identify, therefore it is not overlooked often.

There are at least two populations that appear to have been extirpated sometime in the past century. There are about another dozen populations that have not been seen in recent years. Many of these have very poor locality information. Therefore, finding these historical populations is difficult and it is unknown if these populations are still extant. Overall, long term trends indicate at least some decline.

Phragmites australis is becoming a serious threat to the habitat at one population. The hydrology at two populations appears to have been altered and perhaps is threatening the habitat where C. chordorrhiza occurs. Potential threats include development especially on the edges of the wetlands, trampling by scientists and people fishing, and alteration of the hydrology.

Survey work is needed on all historical population.

Carex chordorrhiza occurs primarily in peat lands that often are at least somewhat minerotrophic including rich, medium, and poor fens. The habitat is usually open although it does occur where there are some shrubs present and also in openings in forested wetlands (New York Natural Heritage Program 2006). Fens, bogs, floating mats on lakeshores, emergent sedge marshes, usually in very wet sites, often in shallow water (Reznicek and Catling 2002). Sphagnum bogs (Gleason and Cronquist 1991). Quagmires and inundated bogs (Fernald 1970). Found in very wet sphagnum bogs and lake-borders in calcareous districts (Mackenzie 1931-1935).

Carex chordorrhiza occurs in northern, central, and western New York. New York is close to the southern edge of its range.

Carex chordorrhiza occurs in Eurasia and North America. In North America it is known from Alaska east to Greenland south to New Hampshire, Vermont, Pennsylvania, Michigan, Indiana, Illinois, Iowa, Montana and British Columbia. It is apparently introduced into cranberry bogs in Oregon (Reznicek and Catling 2002).

Creeping sedge is a grass-like perennial that grows in patches. The leaves are strap-like and 0.4-3.0 mm long. The stems arise singly and are 5-35 cm long. Some of the stems do not produce flowers and these stems fall down and elongate up to 120 cm long. Some of the stems have 2-7 flower/fruit clusters (spikes) towards their apices. These spikes are egg shaped, attach directly to the stems, and are composed of male flowers above and female flowers below. The female flowers mature into fruits (perigynia) which are 2.0-4.5 mm long and have a small beak at their apex (Reznicek and Catling 2002).

Carex chordorrhiza is short-rhizomatous and perennial. It has true vegetative stems with nodes and internodes. The vegetative stems continue to elongate throughout the growing season and eventually become prostrate. The following year, shoots and roots arise at the nodes of the prostrate vegetative stems. These stems become covered by vegetation and appear to be true rhizomes. Fertile culms are 5-35 cm long and have 2-7 sessile androgynous spikes clustered towards the apex of the stems. The inflorescence is 5-16 mm long and the spikes are 4-8 mm long. Perigynia are 2-4(-4.5) mm long and have an erose to just weakly bidentate beak (Reznicek and Catling 2002).

This species is easiest to identify when it has mature or just immature perigynia. It can be identified at other times of the year based on its vegetative characteristics but not as easily or definitively.

Carex chordorrhiza is a very distinctive sedge especially because it has vegetative culms that root at the nodes. This character is shared by only a few other species of Carex which are all quite distinct from C. chordorrhiza.

Carex chordorrhiza starts to produce immature perigynia in June. These mature and perist till late July or early August. Towards the end of this season the perigynia start to shed easily. This species can be recognized at other times of the year based on vegetative charcteristics but it is most obvious when it is in fruit. Therefore, the best time to survey for this species is from the second week in June through mid-July.

The time of year you would expect to find Creeping Sedge vegetative and fruiting in New York. 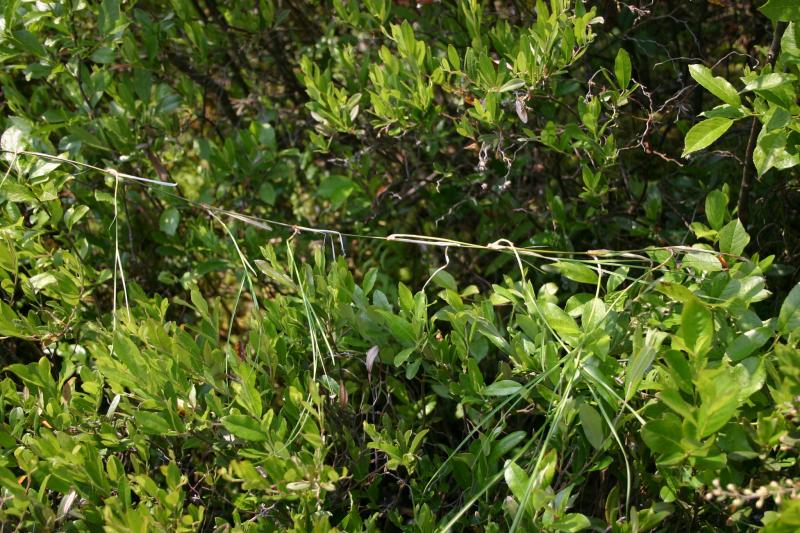 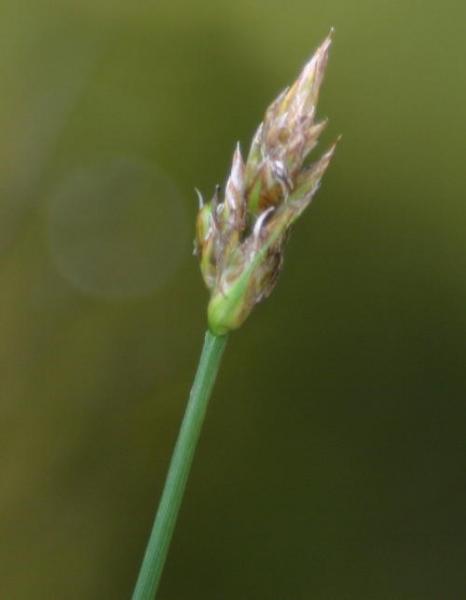 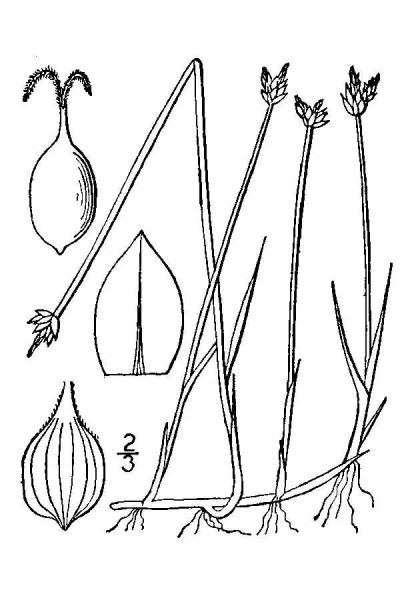 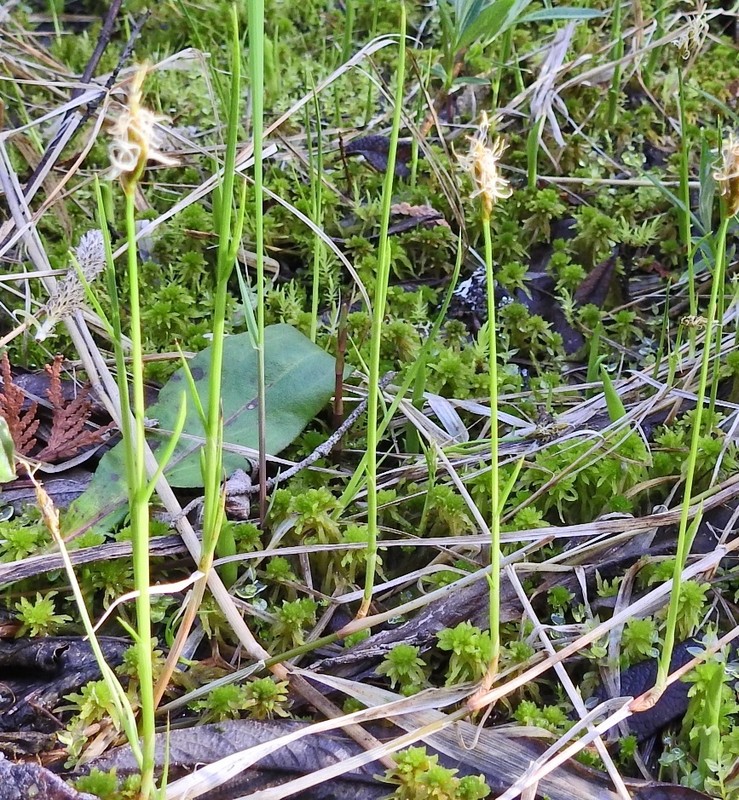 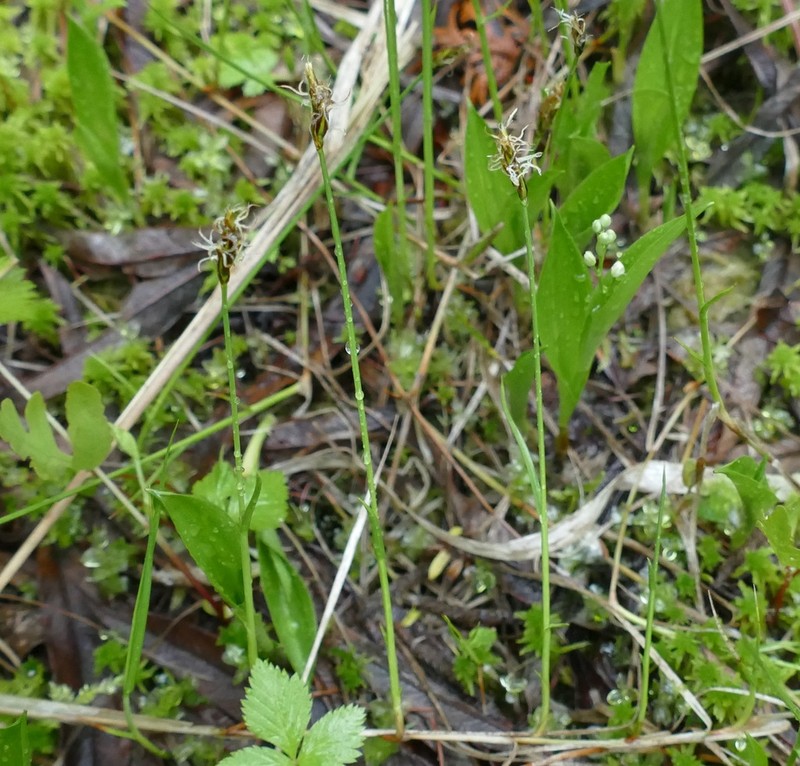 Carex chordorrhiza is in the only member of section Chordorrhizae (Reznicek and Catling 2002).