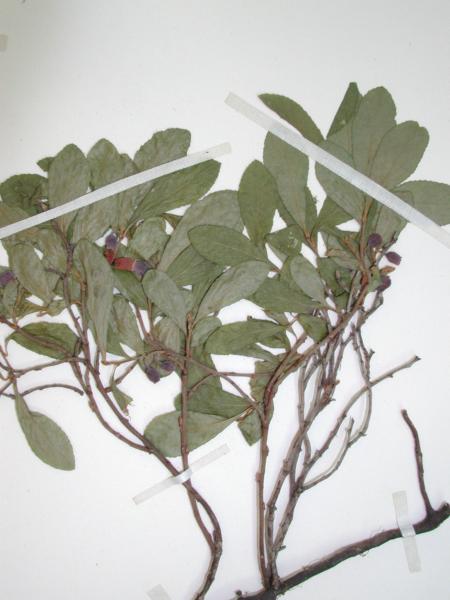 The specific name cespitosum means forming tufts and is probably in reference to the way this species creates dense patches. Dwarf blueberry is a very widespread species, occurring as far away as the highlands of Guatemala, but it is very rare in New York.

Short-term trends are unclear but one of the extant sites has only one plant. This may indicate that a new population has begun or that an old population is declining.

Four populations have not been seen in over 40 years. Some of these populations have been searched for but more survey work is needed to determine if they are truly extirpated. No other data on long-term trends exists.

At one of the extant populations, the plants grow along the edges of a trail. Although trampling by hiker traffic at this site does not currently appear to be a problem, it is a potential threat.

Currently, in New York this species is known only from the high peaks region of the Adirondacks. There are two historical records which need to be verified from the southern parts of northern New York .

Dwarf blueberry is a low shrub (up to about 8 to 12 inches tall) that forms dense patches. Its twigs are ridged and usually minutely hairy with scattered, white, downward-hooked hairs. The shining leaves are about 1/2 to 1 and 1/4 inches long and 1/8 to 1/2 inches wide. The margins have minute, glandular teeth at least in the upper half. The 5-lobed, nodding, white to usually pink flowers, are about 1/8 to 1/4 inches long, lantern-shaped, and solitary in the leaf axils. The fruits are light blue and have a very thin waxy coating (Fernald 1970, Gleason and Cronquist 1991, Vander Kloet and Dickinson 1999)

Vaccinium cespitosum is a dense often matted shrub that only gets to about 20 or at most 30 cm in height, although outside of northeastern North America it can grow up to 60 cm tall. Only two scales cover the buds. The twigs are not papillose. The leaves are oblanceolate to obovate, green, serrate on the upper half, and glabrous. The flowers are 5-merous, solitary in the leaf axils of the current season's branches, and have rounded low calyx lobes. A pair of upward projecting spurs (in addition to the terminal tubules) occurs on the anthers (Fernald 1970, Gleason and Cronquist 1991, Haines and Vining 1998, Vander Kloet and Dickinson 1999).

This species can be identified fairly easily when in flower or fruit, although the flowers are particularly helpful and collections should include them.

Vaccinium cespitosum is a very distinctive taxon in New York.

Vaccinium angustifolium and V. boreale can occur with V. cespitosum. The two former species are distinguished by elliptic leaves with acute apices, the flowers occurring in clusters, the calyx lobes evident and not rounded, the twigs papillose, and the anthers not spurred.

Vaccinium uliginosum also can occur with V. cespitosum. It differs in having flowers with four petals instead of five, more than two scales covering buds, leaves entire, densely hairy below, and blue-green, and flowers solitary or paired, arising from the previous year's branches (Voss 1996, Haines and Vining 1998). It is much more common in the alpine areas.

This species is in flower from late June through July. Therefore, the best time to survey for this species is during this time frame although it can be seen vegetatively all season.

The time of year you would expect to find Dwarf Bilberry vegetative, flowering, and fruiting in New York. 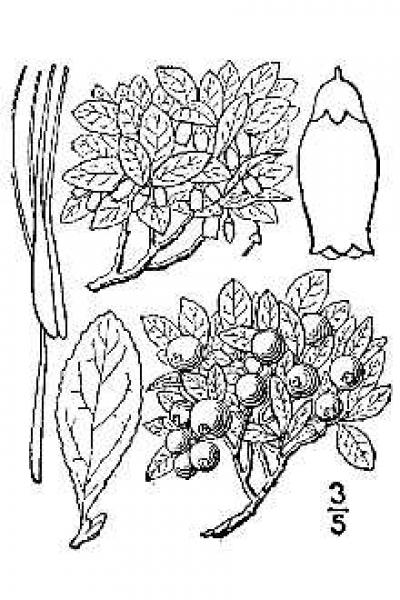 Line drawing of Vaccinium cespitosum from Britton, N.L., and A. Brown. 1913. An illustrated flora of the northern United States, Canada and the British Possessions. Vol. 1: 640.