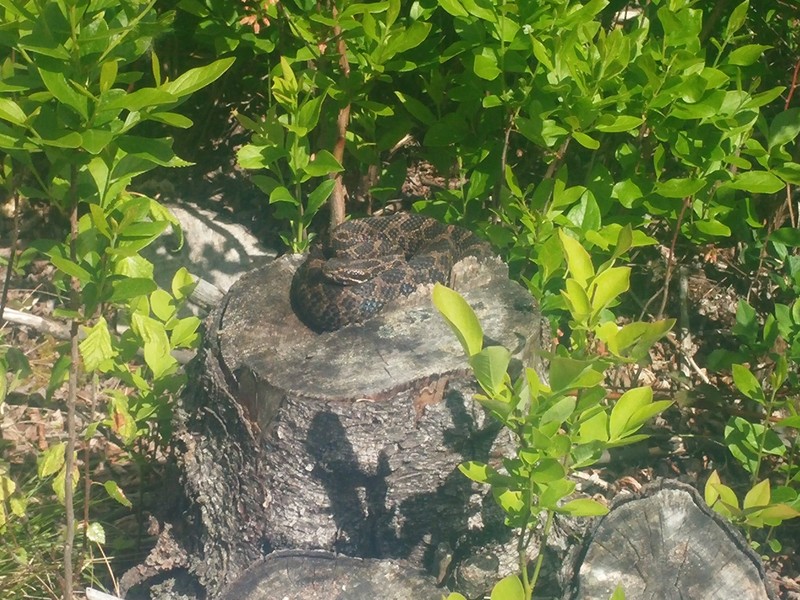 State Protection
Endangered
Listed as Endangered by New York State: in imminent danger of extirpation in New York. For animals, taking, importation, transportation, or possession is prohibited, except under license or permit. For plants, removal or damage without the consent of the landowner is prohibited.
Federal Protection
Threatened
Listed as Threatened under the Federal Endangered Species Act

Unlike most rattlesnakes, Eastern Massasauga do not hibernate with other snakes (Johnson 1995).

New York State Department of Environmental Conservation studies indicate a sharp population decline since the 1960s which led to listing this species as state endangered in 1983 (Johnson and Breisch 1999). The population estimate is approximately 200 snakes excluding neonates in New York (Krofta 2007). Krofta (2007) suggests a stable population consists of a minimum of 200-300 adults and subadults. Therefore, neither population in New York is considered stable. Wintering habitat is largely protected, however, succession is a threat (Johnson 1995, New York State Department of Environmental Conservation 2019, Szymanski 1998).

The population size is approximately 200 snakes, excluding neonates (Krofta 2007). Krofta (2007) suggests a minimum population of 200-300 adults and subadults at each site to be considered stable. Based on this minimum, both sites in New York are vulnerable. Natural succession is a significant threat. Reproduction has been confirmed at both sites.

Historically, this species was once considered abundant at known locations (Johnson et al. 2000). New York State Department of Environmental Conservation studies indicate a sharp population decline since the 1960s (Johnson and Breisch 1999). The species was listed as state endangered in 1983 (Johnson and Breisch 1999). Historically, snakes were killed in large numbers throughout its range (Szymanski 1998).

Anthropogenic factors are the most significant threat to Eastern Massasauga populations. Development, agriculture, unregulated hunting, snake collecting are all present threats. Some people kill snakes due to fear during accidental encounters. Gestating areas and hibernacula in New York are on protected land which offers some protection. However, natural succession from open, natural wetlands to a closed canopy is a significant threat at both sites (Johnson 1995, New York State Department of Environmental Conservation 2019, Szymanski 1998). Upland habitats do not have the same protections as wetlands and risk fragmentation between seasonally used habitats. Unregulated collecting was legal until the 1970s in parts of NY (Johnson 1995).

Transitional peatlands are critical for hibernation and gestation. It may be necessary to create site-specific management plans. In New York State, consultation with the Department of Environmental Conservation is needed. The suggested goal is to have at least 50% of the habitat open with vegetation less than 0.5 meter tall (Johnson et al. 2000). Shoemaker et al. (2007) recommends that a closed canopy should make up 0% to 25% of the wetland habitat and snakes have areas for “cryptic” basking. Prescribed burns and mechanical treatments are used to maintain open habitats (Johnson and Breisch 1999, Johnson et al. 2000, Western Pennsylvania Conservancy 2019). Johnson et al. (2000) recommend mechanical treatment in peatlands and some wooded areas, which includes cutting, brush-hogging, mowing, and disking. Mowers should be positioned 4 to 6 inches above ground. The best time to mow is while the snakes are hibernating (Johnson et al. 2000, Western Pennsylvania Conservancy 2019) or at least when snakes are less active, from 11am to 3pm (Johnson et al 2000). Disking should be used as a last result because it can kill a lot of snakes and damage hibernation sites. Studies should be conducted to find as many hibernating sites as possible because altering these sites could negatively impact the population. Note that some plants may respond to cutting by growing more densely (Johnson and Breisch 1999). These management techniques can be expensive and time consuming because the work needs to be repeated after substantial regrowth. Herbicides can help increase the intervals between treatments, however little is known about how herbicides affect snakes (Johnson et al. 2000). If used, the best time to apply herbicides is at the end of the growing season, just before the leaves fall (Johnson et al. 2000). Herbivory can help control vegetation growth and may be suitable in some areas (Johnson and Briesch 1999). Management plans should include strategies that includes habitats for small mammals and crayfish (Johnson et al. 2000). In addition, continued monitoring is advised to determine effectiveness of management actions, including monitoring at control sites (Shoemaker et al. 2008). Krofta (2007) points out that any habitat management actions have potential to have negative impacts on the population. A minimum population of 200-300 adults and subadults is considered stable (Krofta 2007).

Educational materials that explain Eastern Massasauga biology might be useful in areas where the public has concerns about venomous snakes. Outreach to landowners concerning practices that could benefit them and the snakes is also an option to help maintain or expand suitable habitat.

There are three general habitat characteristics throughout the Eastern Massasauga range: (1) a mix of open, sunny areas and some shade for thermoregulation, (2) water table near the surface that does not freeze for hibernation, and (3) variable elevation for foraging (Szymanski 1998). In New York, peatlands are a crucial portion of Eastern Massasauga habitat as they are needed for hibernation and gestation (Johnson 1995). Eastern Massasauga use different habitat seasonally. In the spring and fall, snakes are typically found in wet meadow habitats. Snakes move upland during the summer months (Johnson et al. 2000) in search of prey (Johnson 1995). During the winter, these snakes hibernate individually in sphagnum hummocks and root systems where the soil is saturated, but not inundated. (Harvey and Weatherhead 2006, Johnson 1995, Johnson et al. 2000).

Central New York represents the easternmost extent of the Eastern Massasauga range. This species is confined to two sites in the state: one in Onondaga County and one in Genesee County. Historically, this species was reported from other sites in western New York, but none have been confirmed.

This species range extends from southern Ontario and western New York west across Michigan and southern Wisconsin to southeastern Minnesota, eastern Iowa, and eastern Missouri, south to southern Illinois, central Indiana, southern Ohio, and western Pennsylvania. A disjunct population exists at the eastern end of Michigan's Upper Peninsula (Conant and Collins 1991). Subspecies catenatus may intergrade with subspecies tergeminus in north-central Missouri (Beltz, in Johnson and Menzies 1993). The historical range in Canada extended throughout the mesic prairie and wetlands that formerly were common in southwestern and west-central Ontario (Johnson and Menzies 1993).

Recent evidence (see Szymanski 1998) indicates that Eastern Massasaugas in all of Missouri and Iowa likely represent subspecies catenatus , so all populations north and east of the Missouri River probably should be regarded as S. c. catenatus. This is the circumscription used by the USFWS (2009) for the eastern distinct population segment of Sistrurus catenatus.

Eastern massasauga is a stout, thick-bodied snake that ranges from 45 to 100 cm (18 to 40 in) in length. Females are slightly larger than males. The head is broad and heart-shaped with nine large scales on the crown. A bar with a light border extends from the eye to the rear of the jaw. Body color ranges from light brown to gray with a row of dark brown to black hourglass-shaped blotches down the back. There are three rows of smaller blotches on each side. The belly is usually black with light mottling. Some individuals are all black. Young snakes are similar, but colors are more vivid. This species has a series or loose scales at the end of the tail that vibrates (rattles). Newborn snakes have a single button for a rattle. This species is a mild-mannered snake that rarely strikes (Western Pennsylvania Conservancy 2019).

Two key characteristics to help identify Eastern Massasauga are the nine large scales on the crown and the rattle. In New York, this species does not occur at the same locations as timber rattlesnakes, the only other rattlesnake species in the state.

Adults are the best stage for identification, but juvenile appearance is similar.

Eastern Massasauga hibernate in pockets associated with wetlands. They do not aggregate with other snakes as other venomous snakes do. When they emerge in the spring, males and non-gravid females remain near their hibernation site for 10 to 20 days (Johnson 1995, Johnson et al. 2000). Gravid females remain in wetlands until 10 to 12 days after parturition (Johnson 1995). Females give birth to live young approximately every two years. The typical broods size ranges from 3 to 19 young (Johnson 1995). Hunting occurs during the day with the exception of periods of hot weather (Johnson et al. 2000). Sexual maturity is reached at approximately 3 to 4 years and snakes can live for about 14 years (New York State Department of Environmental Conservation 2019).

Preferred prey are small mammals and sometimes other vertebrates.

Eastern Massasauga can be found from late May to October. Males and non-gravid female use similar upland habitat while gravid females remain close to hibernacula. They are active during the day, but will hunt at night when it's hot outside. Courtship and mating occurs August through September and females give birth to live young from mid-August to mid-September the following year (Johnson 1995).

The time of year you would expect to find Eastern Massasauga present, active, and reproducing in New York. 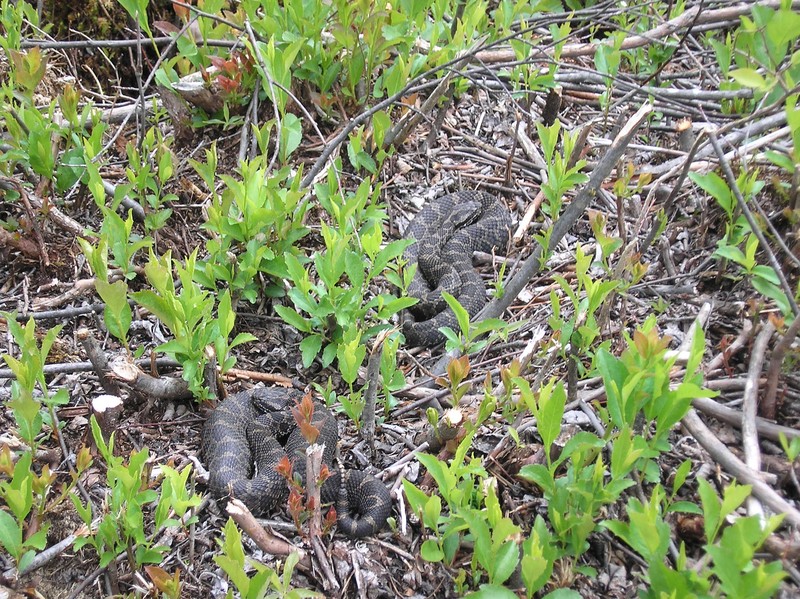 Subspecies no longer recognized. Former subspecies S. c. catenatus was the only subspecies in New York and the Northeast.

Weatherhead, P. J., and K. A. Prior. 1992. Preliminary observations of habitat use and movements of the eastern massasauga rattlesnake (Sistrurus c. catenatus). J. Herpetol. 26:447-452.

Information for this guide was last updated on: July 11, 2019