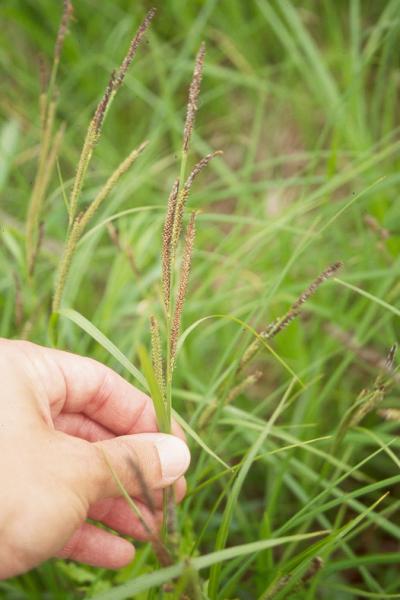 The specific epithet emoryi is in honor of William Hemsley Emory, 1811-1887 (Fernald 1970). This sedge is probably overlooked and much more common here than we realize.

There are only three known populations and two historical populations known today, but this sedge is definitely overlooked. More people need to become aware of how to identify this sedge. We do not know how overlooked this really is, but it is probably more common than its current S1 ranking.

There are three population that have been seen in recent years. Trends at these populations are unknown although, at least one of these populations has a good number of plants in good quality habitat. Overall, short term trends are unclear.

One population was extirpated when the site was flooded for the creation of a reservoir. Another population has not been seen in recent years but surveys have not been conducted to this site and it is unknown if this population is still extant. Two populations were only first seen in 1994. One population has been known to be extant for at least 30 years. It is believed that C. emoryii may be overlooked because of its superficial similarity to other species but currently this is unknown. Overall, long term trends are not clear but indicate a decline.

There are no threats at the few known populations.

Currently there is no management actions needed at any populations.

Emory's sedge is a grass-like perennial. It occurs in colonial patches. Bases of the plants are red-brown. Leaves are 3-6 mm wide and their bases are smooth. Stems 30-115 cm tall are terminated by 5-8 cylindrical flower/fruit clusters (spikes). The lower 3-5 spikes are composed of female flowers that develop into fruits. The terminal 2-3 spikes are composed of male flowers. The fruits (perigynia) are green, have 3-5 veins on them, and are 1.7-3.2 mm long with a small beak at their apices (Standley et al. 2002).

Carex emoryi is long rhizomatous and colonial. Basal leaf sheaths are burgundy, not ladder-fibrillose, and glabrous. Leaf blades are 3-6 mm wide. Ligules are shorter than wide and truncate. Bracts are about the same height as the inflorescences. There are 3-5 lateral pistillate spikes, 2.5-10 cm long and 2-3 terminal staminate spikes. Pistillate scales are as long as the perigynia they subtend. Perigynia are green, veined of both sides, and 1.7-3.2 mm long.

It is easiest to identify this species when it has almost mature or mature perigynia but the perigynia are not easily shedding. Full specimens including rhizomes and lower leaf sheaths are helpful in identification of this species and should be collected.

Carex aquatalis in New York differs by having the proximal bracts much longer than the inflorescences, perigynia veinless, the front (adaxial surfaces) of the sheaths concave, and stomata usually on both surfaces of the leaves. In comparison, C. emoryii has the proximal bracts about equal to the inflorescences, perigynia finely veined, the front (adaxial surfaces) of the sheaths prolonged and convex, and stomata only on the abaxial surfaces of the leaves.

Carex emoryi starts to produce immature perigynia in June. These mature and persist till late July or perhaps a little longer. Therefore the best time to survey for this species is between mid June and mid July.

The time of year you would expect to find Emory's Sedge fruiting in New York.

Carex emoryi is currently placed in section Phacocystis. It was formerly placed in section Acutae but that section is no longer considered distinct. Carex emoryi is not considered part of the C. stricta subgroup. Most specimens identified as C. aquatalis var. altior are C. aquatalis even though the type of the former is an immature specimen of C. emoryi (Standley 2002).