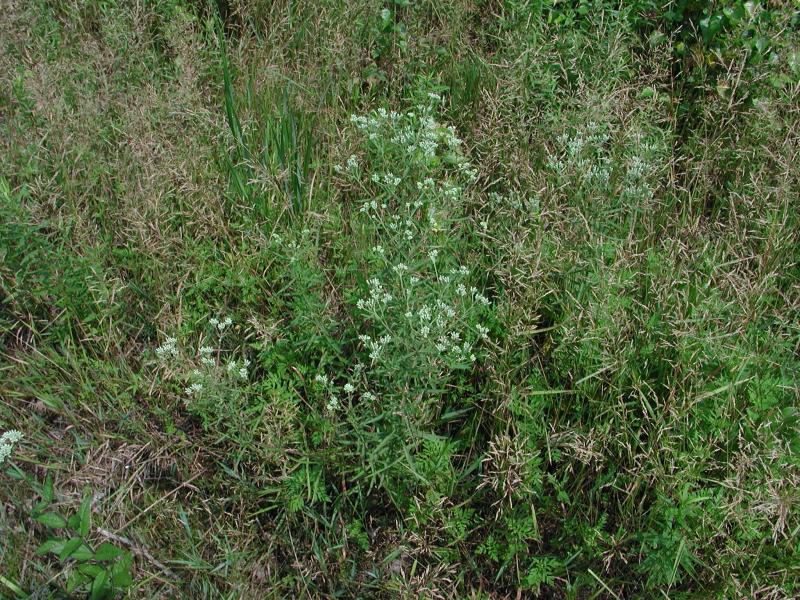 The genus named Eupatorium honors Mithridates Eupator, a ruler of the region Pontus on the southern edge of the Black Sea, who reportedly used a species of the genus in medicine (Fernald 1970). The species and variety name refer to the leaves which resemble a species of the European hyssop, and have larger and more ragged teeth than the typical variety of this species.

There are 10 existing populations but only three of them are in good to excellent condition. The others are small and may not have good long-term viability. There are four historical occurrences.

Current populations seem stable although more survey work needs to be done to evaluate all populations since many have not been resurveyed in recent years.

This species doesn't seem to have been very common in New York although populations may have been overlooked because it is not readily identifiable. There are now twice as many current populations as historical populations so the trend seems to be increasing. The common variety of this species is very common and more survey work to distinguish this rare variety may increase the number of occurrences found.

When these plants grow in open areas frequented by people such as trails and beach areas, they may be threatened by trampling or improper maintenance of the trails that could destroy the plants.

Populations need to be protected from direct human impact by vehicles and trampling. Open habitats should be maintained by preventing succession by woody plants.

Research is needed to determine the habitat preference for this species to determine what separates it from where the more common variety grows. This would help improve future surveys and habitat modeling. Other biological differences such as phenology may also be different from the common variety and need to be studied.

In New York Fringed Boneset has been found in sandy, open habitats, often in grasslands or dunes, but also in openings within shrub thickets or dry oak woods. Some of these sites are adjacent to coastal plain ponds or brackish marshes, and several of the currently known sites are associated with human disturbance such as trails, reservoirs, or airports.

In New York his variety is known only from the Long Island and New York City areas.

Eupatorium torreyanum reaches its northern limit in New York and southern New England, and ranges west as far as Ohio, and south from Florida to Louisiana.

Eupatorium torreyanum is a perennial herb in the aster family, 1.0 to 1.5 m tall. The stems are from short rhizomes or caudices, and are sparsely branched and pubescent throughout. The leaves are mostly opposite or 3-whorled, simple, and sessile, 5-10 mm wide (6-15 times long as wide). They have widely-spaced but conspicuous teeth and are dotted with glands. The principal leaves have fascicles of much-reduced leaves emerging from their axils. The infloresence is of discoid flowers only, arranged into corymbiform (flat or round-topped) heads of five florets each, the corollas are white and 3-3.5 mm, and the calices form pappi of 10-20 bristles 3-3.5mm long.

Flowering or fruiting specimens are best for identification.

The very similar Eupatorium hyssopifolium has mostly linear, narrower (2-5 mm) leaves than those of Eupatorium torreyanum (5-10 mm), with margins that are entire or have only tiny teeth (vs. toothed) and the leaves are usually 4 at a node (vs. usually 2-3). Eupatorium altissimum can grow up to 2 m tall, has opposite, softly hairy (vs. hairless to slightly hairy)leaves that are entire towards the base of the stem but have upward-facing teeth towards the tip and are 5-12 cm long and 8-30 mm wide.

Fringed boneset flowers from July to September, and fruits from October into November.

The time of year you would expect to find Torrey's Thoroughwort vegetative, flowering, and fruiting in New York. 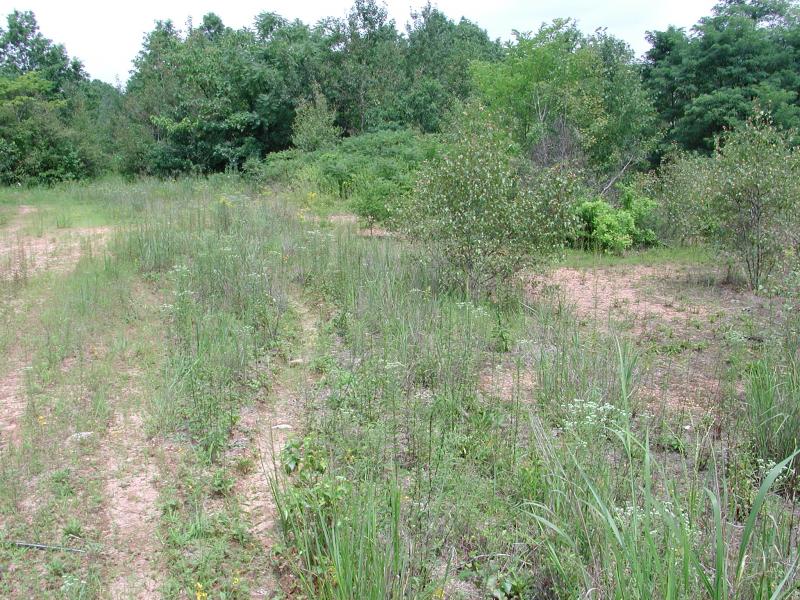 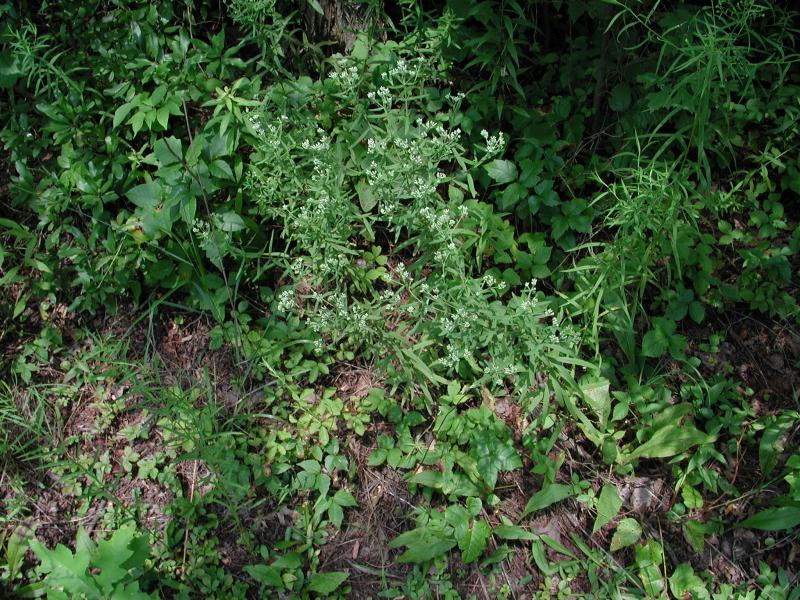 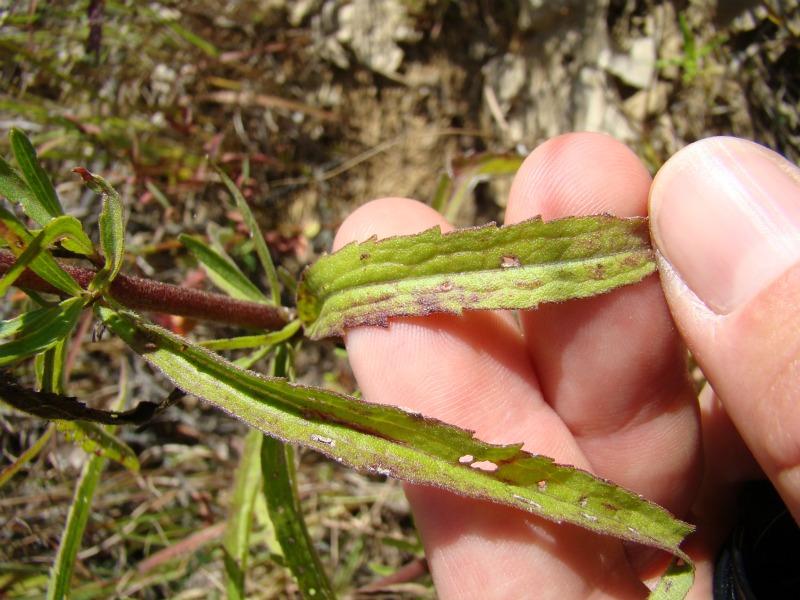 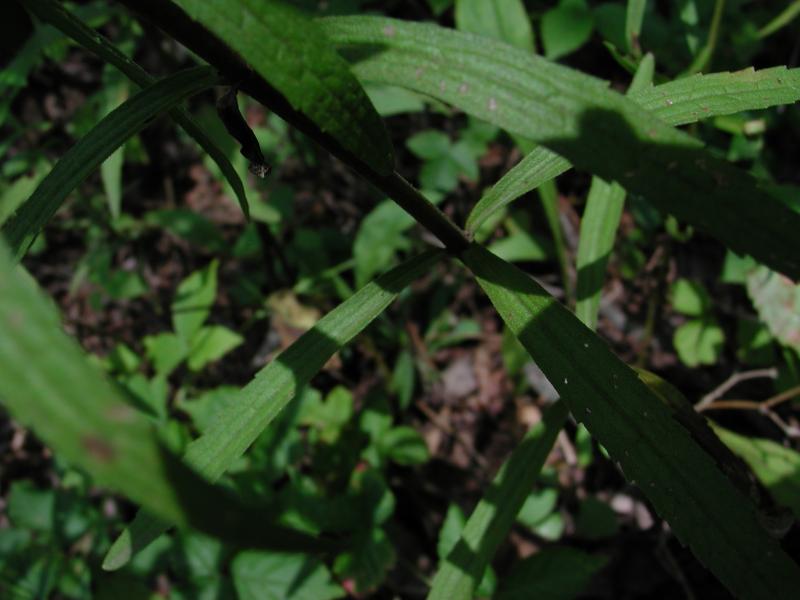 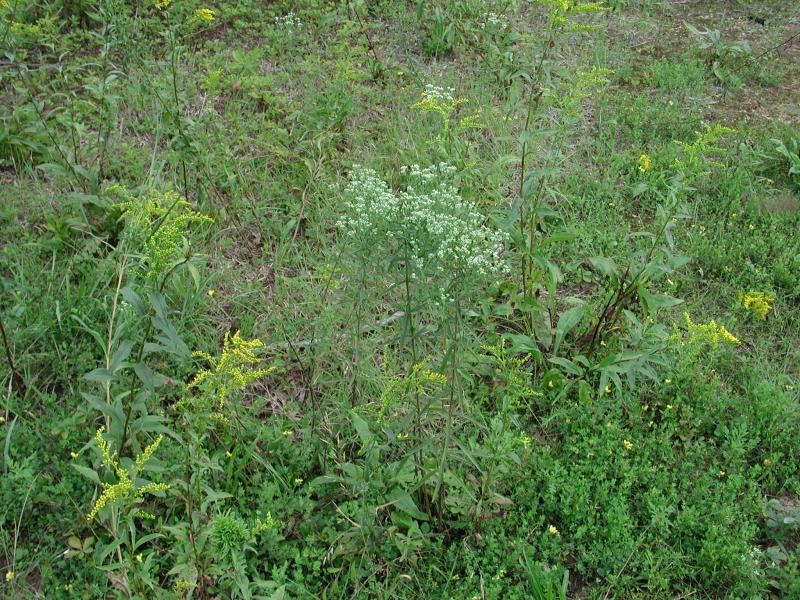 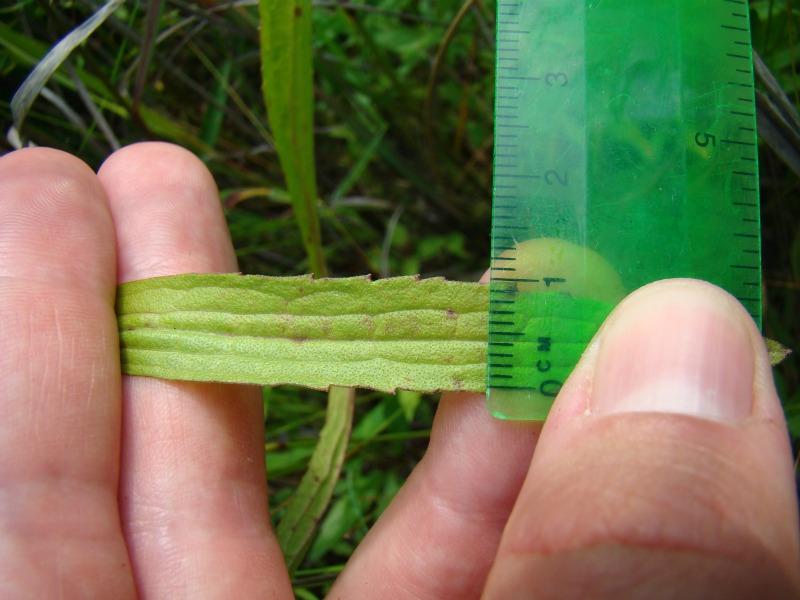 Information for this guide was last updated on: January 14, 2019