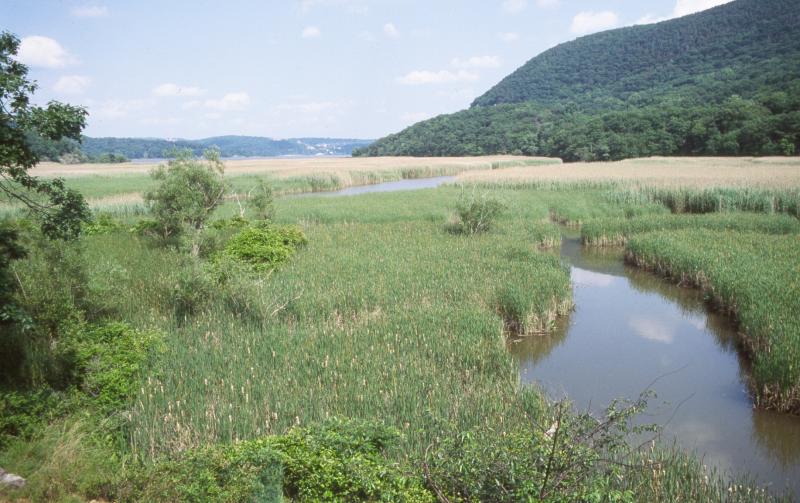 There are probably less than a dozen occurrences statewide. A few documented occurrences have good viability and a few are protected on public land or private conservation land. This community is restricted to brackish portions of estuaries in the state, and includes a few moderately sized, good quality examples. The current trend of this community is probably declining slightly due to moderate threats that include alteration of the natural hydrology and invasive species. Reed grass (Phragmites australis ssp. australis) appears to be a particular threat to this community.

The number of brackish tidal marshes in New York have probably remained stable in recent decades due to wetland protectection regulations. However, the condition and size of a few occurrences may have declined due to invasive species, such as purple loosestrife and reed grass.

The number of brackish tidal marshes in New York has probably declined substantially from historical numbers as a result of shoreline development (e.g., railroads) and river channel dredging.

The main threats to this community are shoreline development (e.g., railroad tracks that impede or alter tidal flow), and invasion of exotic species, such as purple loosestrife (Lythrum salicaria) and reed grass (Phragmites australis ssp. australis). Reed grass appears to be a particular threat to this community. A lesser threat is chemical run-off from railroad maintenance or accidental spill. Dredging of shipping lanes may also pose a threat by reducing water quality, or decreasing area due to deposition of dredge spoils.

Maintain the natural tidal regime in marshes that have been cut off from the Hudson River by the railroad tracks. Control and remove invasive exotic species, such as purple loosestrife and especially reed grass.

Strive to minimize or eliminate hardened shorelines and maintain low-sloped shorelines within the tidal zone. Maintain functional connectivity between the river and bays with marshes to enable full tidal flushing during each tidal cycle. For example, barriers such as railway causeways should have numerous culverts to allow sufficient hydrologic connectivity.

This community occurs along the Atlantic coast from Maine to Virginia and possibly to South Carolina.

Brackish tidal marsh communities occur where water salinity levels are between 0.5 to 18 parts per thousand (ppt) and water is less than 2 m (6 feet) at high tide. The vegetation is very dense, dominated by graminoid species, and is made up of a mix of salt marsh and freshwater tidal marsh species. Characteristic species include narrowleaf cattail (Typha angustifolia), crimsoneyed rose mallow (Hibiscus moscheutos), seaside goldenrod (Solidago sempervirens), saltmarsh fleabane (Pluchea odorata), and various bulrushes (Schoenoplectus spp., Bolboschoenus spp.). Brackish tidal marshes that are dominated by reedgrass (Phragmites australis ssp. australis) as a result of anthropogenic disturbance are classified as cultural communities (e.g., estuarine impoundment mash, estuarine dredge spoil). Brackish marshes that have had the tidal influence restricted may be classified as a palustrine cultural community, such as reedgrass/purple loosestrife marsh.

A brackish marsh community made up of a mix of salt marsh and freshwater tidal marsh species dominated by tall graminoids. Water salinity values range from 0.5 to 18 ppt and water depth is less than 2 m (6 feet). 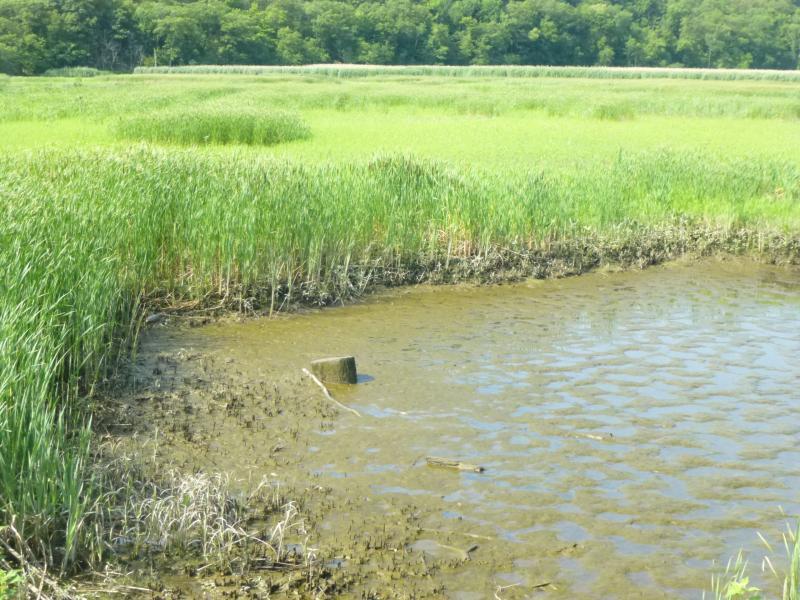 This figure helps visualize the structure and "look" or "feel" of a typical Brackish Tidal Marsh. Each bar represents the amount of "coverage" for all the species growing at that height. Because layers overlap (shrubs may grow under trees, for example), the shaded regions can add up to more than 100%.