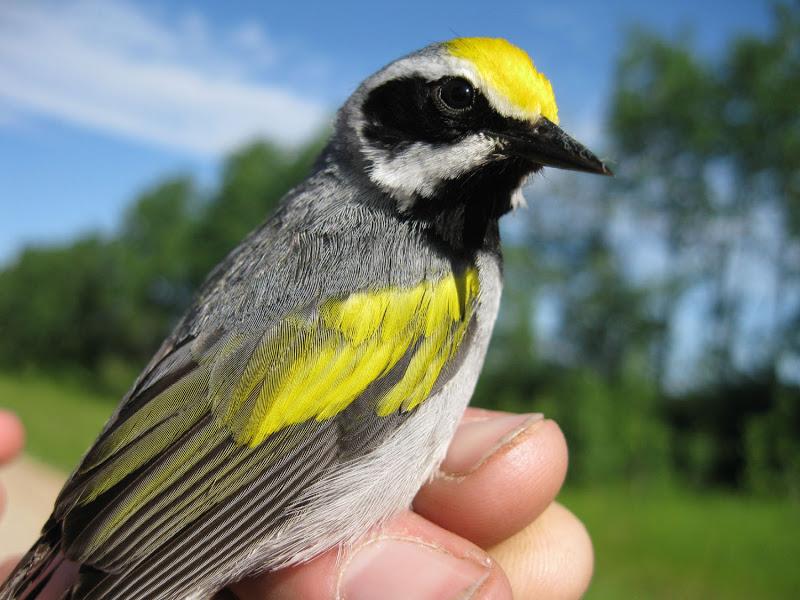 State Conservation Status Rank
S3B
Vulnerable in New York - Vulnerable to disappearing from New York due to rarity or other factors (but not currently imperiled); typically 21 to 80 populations or locations in New York, few individuals, restricted range, few remaining acres (or miles of stream), and/or recent and widespread declines. (A migratory animal which occurs in New York only during the breeding season.)
Global Conservation Status Rank
G4
Apparently Secure globally - Uncommon in the world but not rare; usually widespread, but may be rare in some parts of its range; possibly some cause for long-term concern due to declines or other factors.

Golden-winged Warbler populations are declining in New York and rangewide after a long period of range expansion. They are threatened by hybridization with Blue-winged Warblers and loss of early successional habitat. There is one area in New York located in the Ramapo Mountains, where stable populations of these closely related species appear to co-exist.

The short-term trends are declining dramatically. The Breeding Bird Atlas documented a 53% reduction in statewide breeding distribution from 1985-2005 (McGowan and Corwin 2008). While their distribution in the St. Lawrence river valley in Jefferson and St. Lawrence counties increased during this period, little remains of their formerly widespread distribution in the central to southern part of the state.

Over the last century the Golden-winged Warbler expanded its range northward in New York (Levine 1998). It occurred only in scattered locations throughout southern and central New York in the mid to late 1800s. By the mid-1900s it was moderately abundant in southern New York, by the 1970s it was reported on the eastern part of the Great Lakes Plain and occasionally in the St. Lawrence valley, and by the 1990s had moved into the lower elevations of the Adirondacks and into northeastern New York (Levine 1998; McGowan and Corwin 2008). However, population trends in New York have been declining at least since the start of the Breeding Bird Survey in 1966, with an average decline of 5.3% per year through 2012 (Sauer et al. 2014).

Golden-winged Warblers require shrubby early successional habitat to breed, and this habitat is diminishing due to succession or development in some regions in New York. They are also threatened by hybridization with Blue-winged Warblers (Confer et al. 2011). Management guidelines to promote habitat in the Appalachian and Great Lakes regions are available for landowners at http://www.gwwa.org/plan.html (Golden-winged Warbler Working Group 2013).

Declines in the regional abundance of Golden-winged Warblers are correlated with the replacement of early successional habitat by second growth forest (Levine 1998) and the expansion of the Blue-winged Warbler into their range (Gill 1980). Gill (1987) noted the tendency for Blue-winged Warblers to replace Golden-winged Warblers within 50 years after a range expansion.
For New York, habitat loss and hybridization are also the major threats to the persistence of this species. Early successional habitats are ephemeral by nature and have been in dramatic decline in New York over the last century due to succession and development or conversion (NYSDEC 2005). Historic losses of shrubby wetlands in New York through the 1970s also likely impacted this species (NYSDEC 2005; Buehler et al. 2007). Hybridization with Blue-winged Warblers happens readily between adjoining populations in the state. This likely affects more than half of the statewide population and is a significant cause of decline. However, there has been a population of coexisting Blue and Golden-winged Warblers found in swamps in the Hudson Highlands (Confer and Knapp 1981; McGowan and Corwin 2008).
Nest parasitism by Brown-headed Cowbirds (Molothrus ater) is also a threat, particularly in the more agricultural regions of northern-central New York, where they are more abundant (Confer et al. 2003; Sauer et al. 2014).
Habitat loss on wintering grounds and mortality during migration are threats during the nonbreeding season. High rates of collision with towers during migration have been reported for this species (Arnold and Zink 2011).

Where wooded and shrub swamps provide habitat for Golden-winged Warblers, the replacement of native tussock sedge by invasive Phragmites may be a concern (Confer et al. 2011). In these instances control of Phragmites is warranted (Confer et al. 2011). The Golden-winged Warbler Working Group (2013) has developed best management practices for land owners and managers in the Appalachian and Great Lakes Region that are available online at http://www.gwwa.org/plan.html. In focal areas targeted for managment, characteristics to manage for include patches of at least 5-25 acres (depending on distance to nearest population) in a shifting mosaic of early successional habitat, with 30-70% clumped shrub/sapling cover, patches of herbs and grasses, widely interspersed trees, and high within-patch heterogeneity.

A long-term monitoring program is needed for Golden-winged Warblers in New York, especially targeted to areas of the state where they are still common and on the front of the Blue-winged Warbler range expansion (NYSDEC 2005). Continued research into habitat management techniques that favor Golden-winged over Blue-winged Warblers is also needed, as well as a statewide management plan for restoring, maintaining, and enhancing early successional habitat (NYSDEC 2005). Research to investigate nesting success is needed in conjunction with habitat management research to ensure that the habitats produced are not only favorable to Golden-winged Warblers, but also enable high rates of nest success so the creation of sinks can be avoided (Kubel and Yahner 2008; Confer et al. 2011). Also, research into the effects of the invasive viburnum leaf beetle (Pyrrhalta viburni) on shrubland habitats and the species that rely on them may be pertinent (NYSDEC 2005).

Golden-winged Warblers occur in two disjunct populations in New York resulting from the eastward expansion of the great lakes population and the northward expansion of the Appalachian population. Populations are located in northern New York in the St. Lawrence River Valley and in southeastern New York in the Hudson Highlands (McGowan and Corwin 2008). They are absent from Long Island and in areas of high elevation (McGowan and Corwin 2008).

The breeding range of the Golden-winged Warbler extends from northeastern North Dakota, Saskatchewan, and Manitoba (Cumming et al. 1998; Buehler et al. 2007; NatureServe 2013) eastward across southern Ontario (Vallender et al. 2009; NatureServe 2013), the Great Lakes region, southern Quebec, New York and New England, and southward following the Appalachian Mountain chain into far northern Georgia (Confer et al. 2011; NatureServe 2013). They previously occurred in the mid-west from Ohio westward through southeastern Iowa (Confer et al. 2011; NatureServe 2013). However, mid-western populations have diminished and many have been extirpated since the 1980s with only a few recent records from Ohio (Peterjohn 2001; Confer et al. 2011). The highest breeding densities now occur in central Minnesota and in adjacent northwestern Wisconsin (Confer et al. 2011). Isolation of the eastern population from the north-central population is expected to continue over the next few decades (Buehler et al. 2007). Their wintering distribution includes central Guatemala and northern Honduras southward to northern Venezuela and western Colombia. They are generally more abundant on the Caribbean than Pacific slope (Confer 1992) and most records are from Nicaragua, Costa Rica, Panama, Columbia, and Venezuela (M. Moreno, pers. comm., cited by Confer et al. 2011).

Nests are constructed of leaves as the base, followed by coarse material such as shreds of bark from Viburnum or grapevine (Vitis spp.), with an inner lining of fine plant material (Confer et al. 2011). Eggs are typically cream-colored and speckled towards the broad end (Confer et al. 2011).

Golden-winged Warblers have two song types that have been well-studied (Ficken and Ficken 1967; Gill and Murray 1972; Highsmith 1989). The Type 1 song, common early in the breeding season, is one note followed by three (sometimes 2-8), buzzy notes often described as "bee-buzz-buzz-buzz" (Confer et al. 2011). The Type 2 song is often used in male-male encounters and is also sung in the pre-dawn. It is described as a rapid series of staccato notes followed by a lower-pitched raspy trill (Confer et al. 2011).

The unique combination of black eye mask and throat patch and bright yellow wing and head patches are identifying features of males. Golden-winged and Blue-winged Warblers may mate and produce fertile hybrids. Two hybrid forms are the Brewster's and Lawrence's Warbler which can be distinguished visually. The Brewster's hybrid has a gray back and yellow wing patch similar to the Golden-winged Warbler but lacks the unique black head pattern and instead has only a thin black line across the eye. The Lawrence's hybrid shares the unique black head pattern, but typically has features similar to the Blue-winged Warbler such as more yellow on the head and chest and more separation of the yellow or white wing patches into two wing bars. Intermediate hybrid forms may occur also.

Golden-winged Warblers forage in small trees and shrubs primarily by probing and prying open curled leaves to obtain insect prey (Confer et al. 2011). While foraging, they may hang on branch tips and twigs like a chickadee.

Golden-winged Warblers have been noted to associate with Black-capped Chickadees (Parus atricapillus) occasionally on breeding territories and during migration (Ficken and Ficken 1974). They may also join mixed species flocks prior to migration and occur in them on the wintering grounds (Tramer and Kemp 1982).

Research into diet and major food items for this species is limited and their specific diet in New York is unknown. However, it is known that they consume Tortricid moths and larvae as well other winged insects, and spiders (Will 1986; Confer et al. 2011).

The Golden-winged Warbler is present in New York during their spring and summer breeding season and also passes through during migration. The best time to see them is anytime from spring migration through the late summer when their plumage is most recognizable. They sing frequently and most strongly in the spring after arrival on their breeding grounds; this is typically May 3-5 for most of New York (Levine 1998) and May 14 for north central New York (J. Confer unpub. data). The website ebird.org reports the highest frequencies of Golden-winged Warblers in New York during the period from May 15th through June 21st (eBird 2013).

The time of year you would expect to find Golden-winged Warbler active and reproducing in New York. 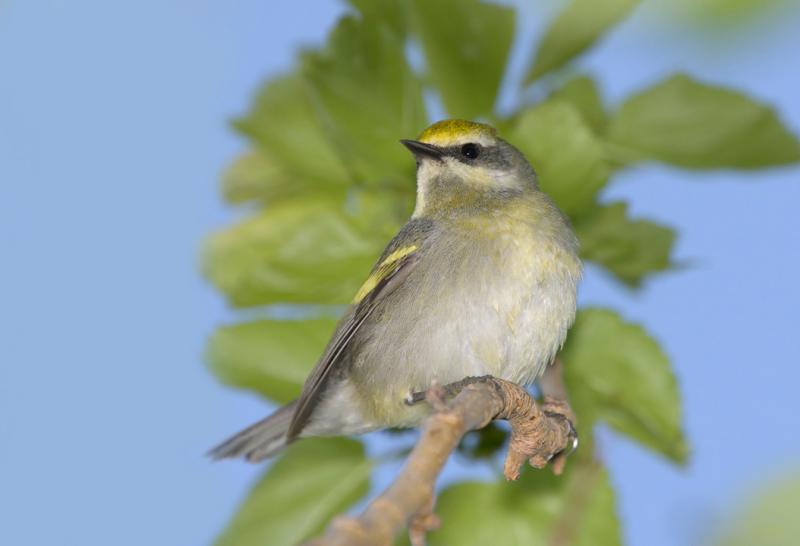 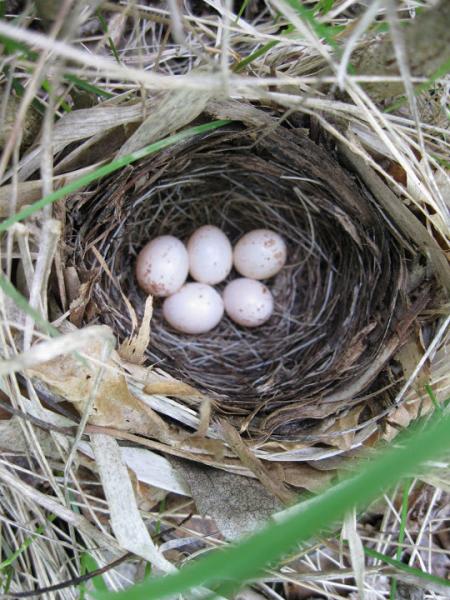 Confer, J. L. and K. Knapp. 1981. Golden-winged Warblers and Blue-winged Warblers: The relative success of a habitat specialist and a generalist. The Auk:108-114.

Gill, F. B. 1980. Historical aspects of hybridization between Blue-winged and Golden-winged warblers. The Auk:1-18.