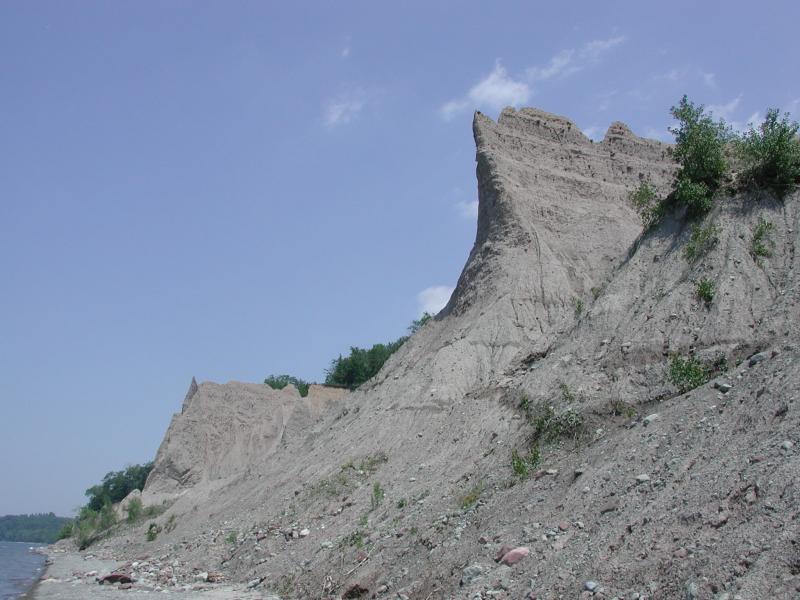 You can see 150 foot tall "chimneys" made of small stone, gravel, sand, and clay at Chimney Bluffs State Park. These eroding drumlins have existed for thousands of years and are constantly changing from exposure to Great Lakes erosional forces, such as water, ice, or wind.

There are an estimated 5 to 30 extant occurrences statewide. Three currently documented occurrences are mostly protected on state park land. Great Lakes bluffs appear to be restricted to the drumlin region of the Great Lakes Plain Ecozone. The bluffs form in areas where drumlins are positioned along the south shore of Lake Ontario. The overall trend for the community is suspected to be slightly declining due to recreational overuse, erosion prevention activities, and other development.

The number and size of Great Lakes bluffs in New York appear to be stable, or perhaps declining slightly, in recent years.

It is likely that Great Lakes bluffs were never widespread and common in New York given their physiogeographic setting (i.e., drumlins on the Lake Ontario shoreline). The number of Great Lakes bluffs in New York may have declined slightly from historical numbers and their aerial extent and viability are suspected to have declined over the long-term. These declines are likely correlated with coastal development and associated changes in connectivity, hydrological alteration, and natural erosion processes.

Maintain the dominant ecological processes responsible for keeping this dynamic community in disclimax. Natural disturbances, including wave erosion and strong offshore winds, should be expected to lead to slumping, gully forming, and bluff retreat. Prevent recreational overuse and encourage the public to stay on marked trails. Because the face of the bluffs can be expected to migrate inland, it is important to protect adequate open space to accommodate such change. Prevent the spread of invasive exotic species into the bluffs through appropriate direct management and by minimizing potential dispersal corridors, such as beach access trails and stairways.

Development should avoid fragmentation ofth bluffs to allow for seed dispersal and seasonal animal migrations. Bisecting trails, roads, and developments can also allow exotic plant and animal species to invade. Connectivity to the lake and to should be maintained to maintain Great Lakes processes, such offshore winds and lake effect precipitation. Natural community buffers should be maintained or restored landward behind the bluffs to allow for bluff retreat in the future.

Releve plots are needed from known occurrences and searches for new occurrencs are needed.

A study could investigate the effects of lake level (artificial vs. historic natural) on the dynamic erosive processes of this community.

A sparsely vegetated community that occurs on vertical exposures of unconsolidated material, such as small stone, gravel, sand, and clay, that is exposed to Great Lakes erosional forces, such as water, ice, or wind. There are very few woody species present because of the unstable substrate. Most abundant species are usually annual and early succesional herbs.

Great Lakes bluffs are adjacent to one of the Great Lakes and are exposed to their erosional forces. The most abundant species are usually annual and early succesional herbs.

Known examples of this community have been found at elevations between 245 feet and 400 feet.

Great Lakes bluffs are an impressive site to see year round. 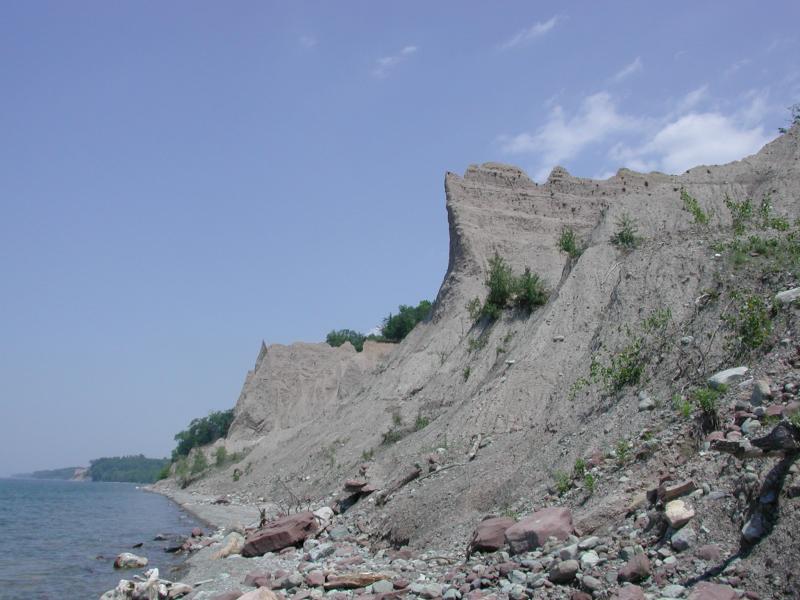 This figure helps visualize the structure and "look" or "feel" of a typical Great Lakes Bluff. Each bar represents the amount of "coverage" for all the species growing at that height. Because layers overlap (shrubs may grow under trees, for example), the shaded regions can add up to more than 100%.

Information for this guide was last updated on: March 17, 2017