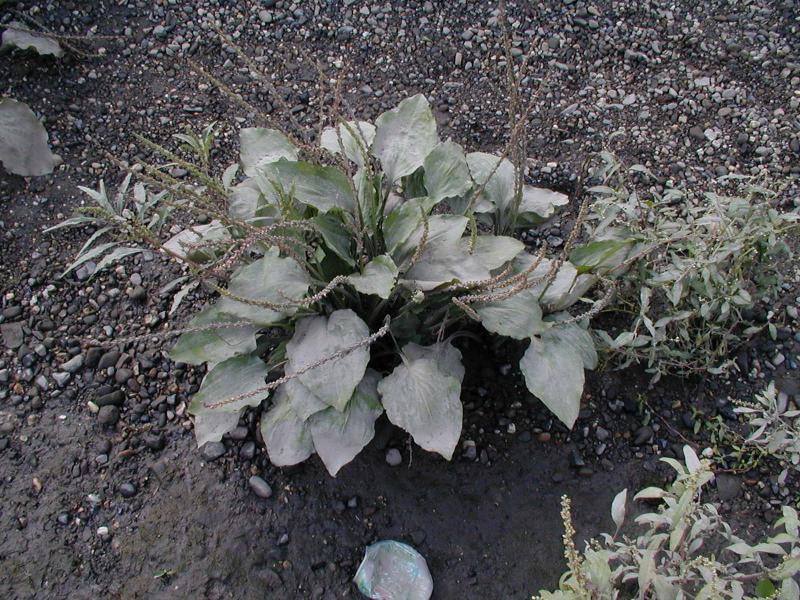 New York has more populations of this plant than any other state. It was only known from the tidal marshes along the Hudson River until the 1990s when a population was found along a stream in western New York. During river flooding and high tides, these plants may be submerged completely for long periods of time. The specific name refers to its heart-shaped leaves.

There are nearly 30 known populations and sub-populations scattered along the freshwater tidal areas of the Hudson River, with a few disjunct populations in western New York. Many of these populations have fewer than 40 individuals, but at least three have more than 1,000 plants. There are some threats associated with this plant, but none are expected to have immediate or severe impacts. New York and Missouri share the greatest responsibility in ensuring the long-term protection of this unique Plantago.

Populations seem stable at this time.

Based on limited evidence, this plant at least appears to have a similar distribution and population abundance as it did in early colonial days. There is even some suggestion that it has increased in abundance due to the protection of various areas along the Hudson River.

Some of the smaller populations may be threatened with changes in the shoreline from floods or wake erosion.

There are no management needs at this time but marina and boat dock development and river traffic should be assessed periodically.

A plant of two different areas and habitats in New York. In the Hudson Valley, it is restricted to the edges of freshwater intertidal mudflats, sandy or rocky shorelines of tidal creeks and other waterways, edges of freshwater tidal marshes, and gravel shores along the freshwater tidal portions of the Hudson River. In western New York, it is found along gravelly streams through red maple-hardwood swamps of the Tonawanda Oak Orchard Swamp drainage (New York Natural Heritage Program 2004). Semi-aquatic, in marshes and along streams, especially on calcareous substrate (Gleason & Cronquist 1991). In and along streams and swampy woods (Fernald 1970).

Heartleaf plantain is characterized by a widespread geographical range within which it is highly localized. A high proportion of the populations are located along the Hudson River, but populations range from New York, south to Virginia, North Carolina, Georgia, and Alabama. It is disjunct inland to Ohio, southern Ontario, Wisconsin, and south through the Mississippi Valley.

This is a short plant, under 30 cm, with compact clumps of many large, shiny-green, strongly-veined, heart-shaped leaves up to 25 cm long and 20 cm wide. The leaves arch out on long stalks from the center of the clump and are often covered with a fine layer of mud from being submerged during high tide. The thick pink flower stalks arise from the center of the clump in early spring and are topped by a spike covered with many tiny greenish flowers with stamens that stick out. These mature into small, green, egg-shaped fruits.

A plant of wet soils with several long, fleshy roots that are 0.5-1.3 cm thick. One of these roots will often become horizontal. The leaves are large and heart-shaped when mature. The main lateral veins tend to arise from the midrib within the blade The lower 2-4 lateral ribs are scattered, but confluent with the midrib. The inflorescence axis is exposed between the flowers.

Common plantain (Plantago major) has slender fibrous roots, solid stems, and lower lateral leaf ribs approximate to the midrib but not confluent with it.

This plantain flowers from April (starting before the leaves come out) through July with mature fruits present in August and September. The ideal survey period is mid-May to early October.

The time of year you would expect to find Heart-leaved Plantain vegetative, flowering, and fruiting in New York. 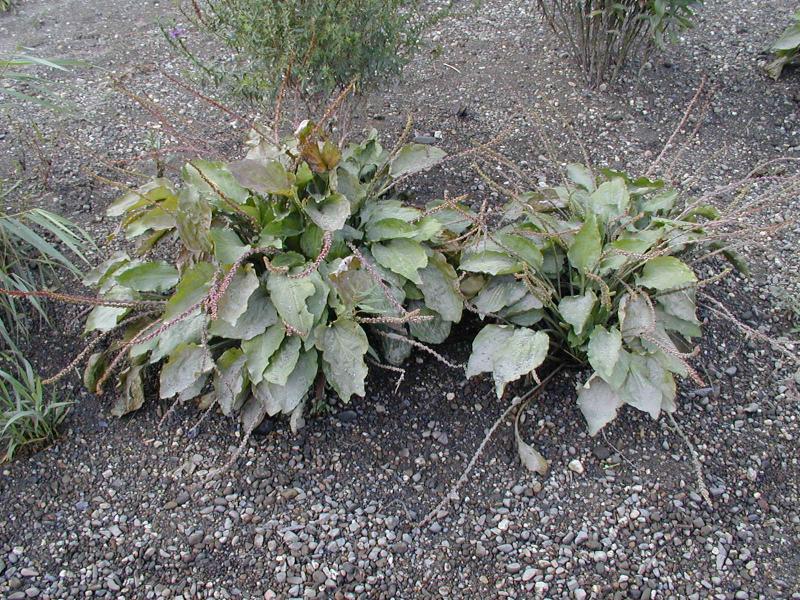 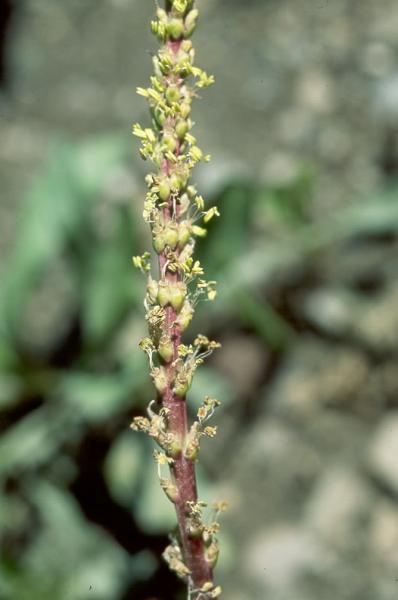 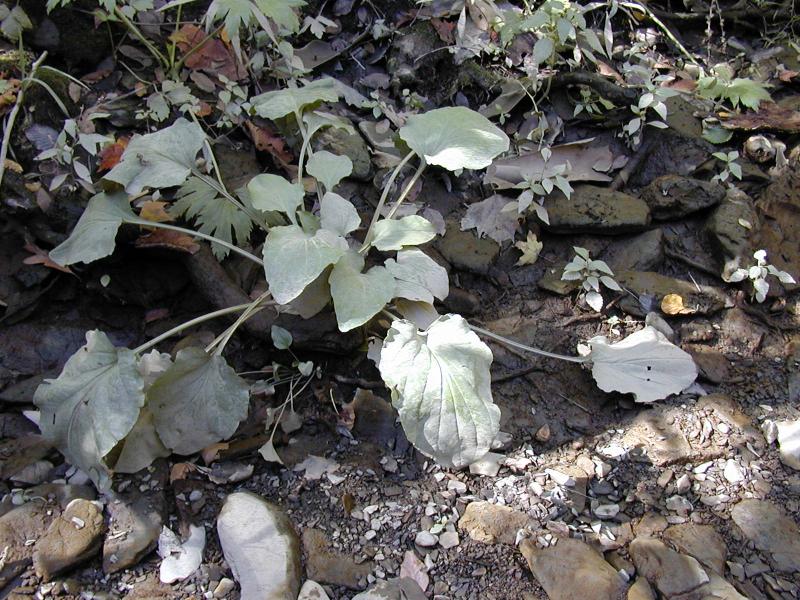 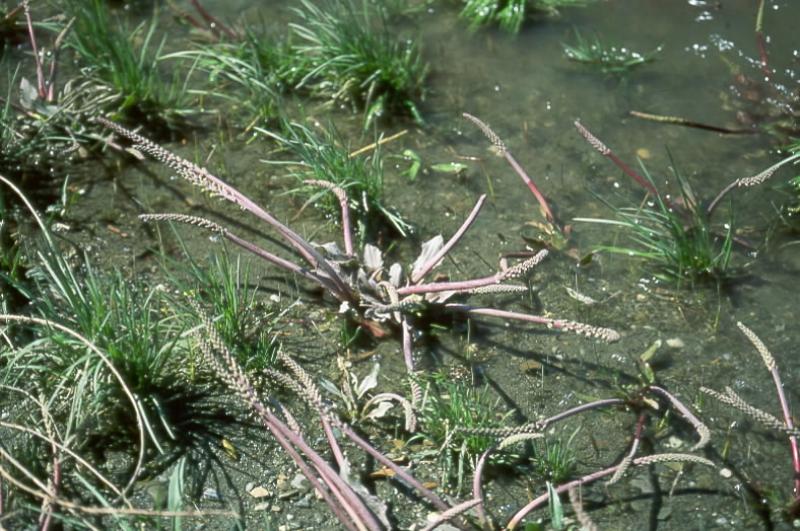 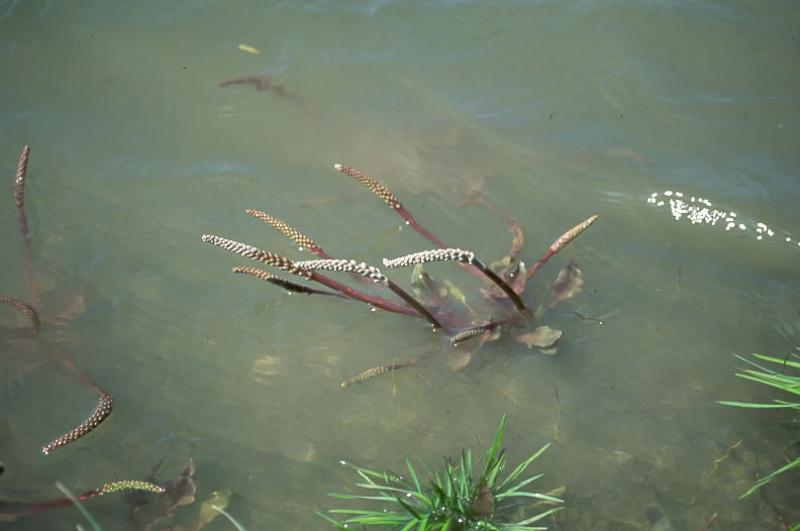