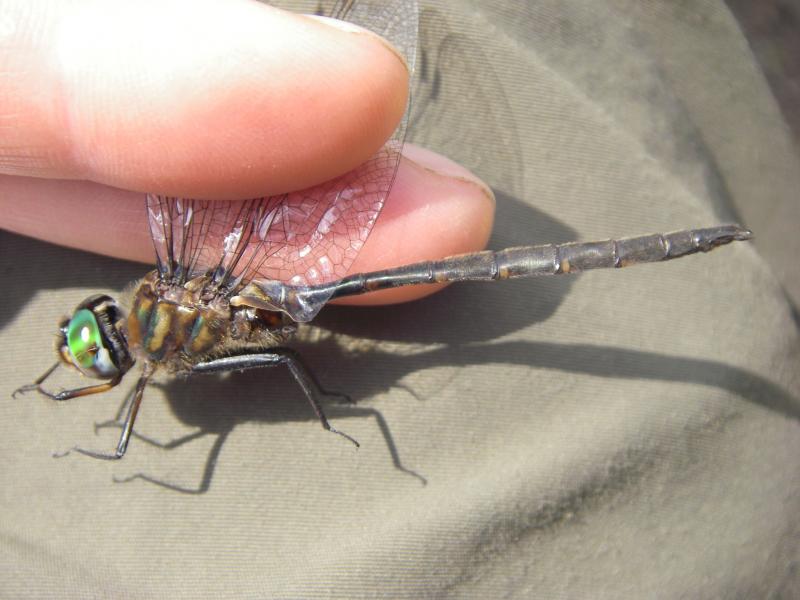 The word incurvate means to curve inward. The Incurvate Emerald is so named because the claspers (terminal appendages) on adult males curve inward at the tip from the dorsal (top) view (Jones et al. 2008).

In New York, Somatochlora incurvata is known from four bogs in three counties in the North Country (New York Natural Heritage Program 2017). It has a small known range in the state, limited to Adirondack sphagnum bogs where threats to habitats could include climate change and hydrologic alteration due to human activities.

There is no information on population trends for this species at known locations, as a number of sites have only recently been documented and it was first observed in the state in 1993 (Donnelly 1999, New York Natural Heritage Program 2017). The species seems to be highly ephemeral in New York because it has rarely been observed at a site subsequent to the initial sighting (with the exception of Massawepie Mire), despite numerous visits by experienced surveyors. This pattern is similar to Michigan where the species was first described in 1916, but not seen again until the early 1990s (Lee 1999).

Any activity which might lead to water contamination or the alteration of natural hydrology could affect Incurvate Emerald populations (NYS DEC 2005). Such threats may include roadway run-off, industrial pollution, the building of dams, peat mining, forestry, or development activities near their habitats (NYS DEC 2005). Both emergence rates and/or species ranges may shift for odonate species as a result of climate change (Corser et al. 2014).

Further research is needed to define the distribution and population size of the Incurvate Emerald and inventory in Adirondack sphagnum bogs is needed. An informative distribution model developed by NY Natural Heritage highlighted several large bogs in southern Franklin County that would be worthy of intensive survey efforts including north of the St. Regis River near Whitney Pond and Black Pond Swamp and Bull Rush Bay on Middle Saranac Lake in the Saranac Lakes Wild Forest (New York Natural Heritage Program 2006). In addition, research is required to understand the habitat requirements and threats to this species, and to create appropriate management guidelines for its persistence in known locations (NYS DEC 2005).

In New York this species inhabits large, open, forest-bordered bogs, poor fens, and peatlands with widely scattered tamarack and black spruce, and ericaceous bog shrubs interspersed with sedges and Sphagnum, with abundant shallow, pooled water and rivulets. The water in these pools is clear and cold and moves almost imperceptibly through the sphagnum mat (Shiffer 1993). In Michigan, S. incurvata can be found in patterned peatlands and northern fens associated with marl- or peat-containing flowing alkaline groundwater (Lee 1999). Wisconsin habitats are large wetland complexes on old glacial lake beds, often adjacent to sandy pine uplands. Larvae have only recently been described and were found clinging to the underside of sphagnum mounds at pool edges in partially decomposed dark brown sphagnum and sedges (Wisconsin Natural Heritage Inventory Program 2010).

Incurvate Emeralds have been documented in three counties in northern New York: Essex, Franklin, and St. Lawrence. It has been observed at four bogs in these counties since 1993 (New York Natural Heritage Program 2017).

Incurvate Emeralds have bright emerald green eyes when mature. Males have a dark thorax with metallic green iridescence and two lateral spots fading with age (anterior spot is more elongate and posterior spot is shorter and more rounded). Their abdomens are brownish to black and long and slender. There are dull orange-brown lateral spots on abdominal segments 3-8. The male cerci (terminal appendages) are distinctive from other Somatochlora and are strongly curved inward at tips from the dorsal view. Females are similar to males, but have a thicker abdomen and a yellowish ovipositor that is large and scoop-shaped (Nikula et al. 2003, Jones et al. 2008, Paulson 2011).

Boreal Somatochlora nymphs take at least 4 years to develop and they occupy shallow water meadows, sedge-filled pools, and sedge-filled shallows of small ponds. During this time, they are drought resistant and can survive dry conditions for up to 4-9 months through certain physiological adaptations and by actively burrowing in mud and seeking out sheltered locations in moss, cracks in mud, crevices in rotting logs, and sedge root clumps (Wiley & Eiler 1972). Adult males fly low and erratically over vegetation and occasionally perch on tree branches or hover over open pools.

Incurvate Emerald larvae feed on smaller aquatic invertebrates and adults feed on insects which they capture in flight.

Incurvate Emerald adults have been found in New York from July through August (Donnelly 1999, New York Natural Heritage Program 2017). They could possibly be observed later in the season, given flight dates in nearby states and provinces (Paulson 2011).

The time of year you would expect to find Incurvate Emerald present and reproducing in New York.

Information for this guide was last updated on: March 31, 2017