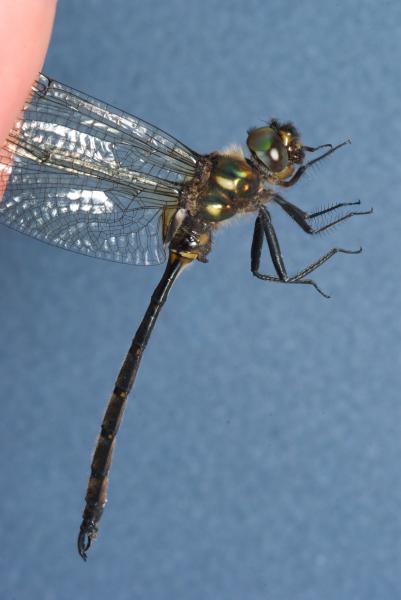 Forcipate Emeralds are not easy to observe due to their elusive behavior of perching in trees up to 20 feet above ground (Paulson 2011). They can best be observed when foraging in flight over roads or clearings or when females come down to open water to oviposit in breeding habitat.

In New York, Somatochlora forcipata is known from nine sites in six counties mainly in northern NY, with one location in Rensselaer County (New York Natural Heritage Program 2018). It has a small known range in the state, mainly found in bog habitats with some flowing water, where threats to habitats could include climate change and hydrologic alteration.

During the 1990s, Forcipate Emerald was discovered in large bog complexes in Franklin and St. Lawrence Counties as well as sites in Essex and Lewis County (Donnelly 1999, 2004). Additional new sites in the Adirondacks were added recently in Hamilton, Franklin, Essex, and Lewis Counties and at least two of the known sites have been extant for 10-15 years. In 2007, the range was extended significantly southward in New York to the Rensselaer Plateau and records are known from nearby in western Vermont and Massachusetts (Donnelly 2004).

The species was first documented in New York in the 1980s (New York Natural Heritage Program 2018). Since observations are fairly recent, and the full extent and size of the populations have not been determined, long-term trends are unclear. A recent new county record in NY could reflect a recent range expansion, but more likely reflects an increase in survey efforts.

Any activity which might lead to water contamination or the alteration of natural hydrology could affect Forcipate Emerald populations. Such threats may include roadway run-off, industrial pollution, the building of dams, peat mining, forestry, or development activities near their habitats (NYS DEC 2005). Both emergence rates and/or species ranges may shift for odonate species as a result of climate change (Corser et al. 2014).

Any efforts to reduce siltation of habitats, reduce alteration of the bogs from activities such as peat mining, and any ditching and filling activities should be considered when managing for this species (NYS DEC 2005).

Appropriate bog/fen habitats should be searched in Sullivan and Orange Counties and along the central Southern Tier in Steuben, Tioga, Chemung and Broome counties because there are known records in adjacent New Jersey and Pennsylvania (Donnelly 2004). In addition, research is required to understand the habitat requirements and threats to this species, and to create appropriate management guidelines for its persistence in known locations (NYS DEC 2005).

This species inhabits small spring-fed boggy streams, feeding in sunny glades and along roads and perching in trees 15-20 feet high. Both larger bog/wetland complexes and smaller boggy swales can be occupied as long as some moving open water with pools is present (Walker and Corbet 1975).

During the 1990s, it was discovered in large bog complexes in Franklin and St. Lawrence Counties as well as sites in Essex and Lewis County (Donnelly 1999, 2004). Additional new sites in the Adirondacks were added recently in Hamilton, Franklin, Essex, and Lewis Counties and at least two of the known sites have been extant for 10-15 years. In 2007, the range was extended significantly southward in New York to the Rensselaer Plateau and records are known from nearby in western Vermont and Massachusetts (Donnelly 2004). It is likely that this species breeds on small streams primarily within larger bogs (more infrequently at smaller ones) throughout the Adirondacks and perhaps the Tug Hill and Rensselaer Plateaus.

The center of Forcipate Emerald's distribution lies in north-central Ontario in the central Canadian Shield forest ecoregion and ranges northwestward to the Northwest Territories, south to northern Wisconsin and West Virginia, northeastward to Newfoundland and Labrador (Donnelly 2004). New York lies near the center of the range, but this species was not discovered in the state until 1980 in Hamilton County (Donnelly 1999).

Male Forcipate Emeralds have a metallic green and brown thorax with two oval-shaped pale yellow spots of similar size on both sides. Their face is black and they have bright emerald green eyes. Their abdomen is dark with a whitish ring on segment 2 and small yellow spots on the side of segments 5 through 8. Males have a distinctive clasper that is arched in profile, long cerci that are slightly incurved with sharply pointed tips. Females are similarly colored with a distinctive broad subgenital plate that projects downward obliquely and is about as long as abdominal segment 9. The female's lateral abdominal yellow spots are found on segments 3 to 7 (Mead 2003, Paulson 2011).

The characters most useful for identification are the yellow thoracic spots and unique terminal appendages on the adults.

Boreal Somatochlora nymphs take at least 4 years to develop and they occupy shallow water meadows, sedge-filled pools, and sedge-filled shallows of small ponds. During this time, they are drought resistant and can survive dry conditions for up to 4-9 months through certain physiological adaptations and by actively burrowing in mud and seeking out sheltered locations in moss, cracks in mud, crevices in rotting logs, and sedge root clumps (Wiley & Eiler 1972). Somatochlora almost always occur at low densities, they often fly high (30-50), and adults are extremely elusive and difficult to capture (Packauskas 2005).

Forcipate Emerald larvae feed on smaller aquatic invertebrates and adults feed on insects which they capture in flight.

The time of year you would expect to find Forcipate Emerald reproducing and larvae present and active in New York.

Information for this guide was last updated on: March 15, 2019