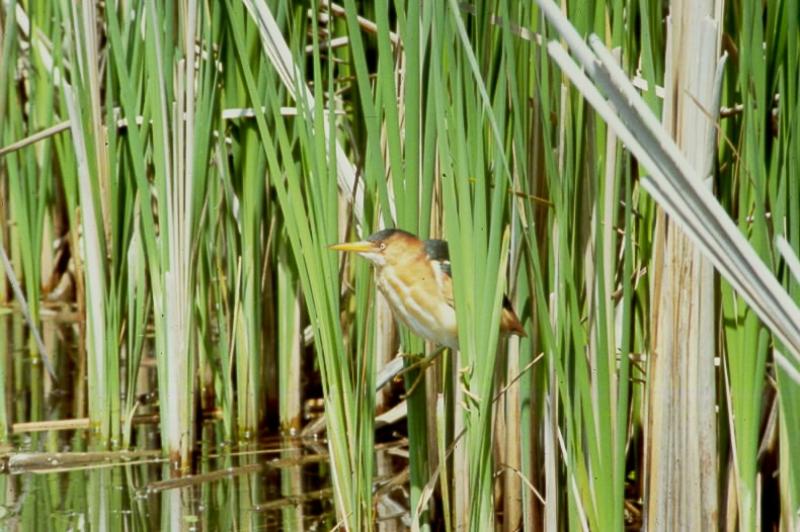 State Conservation Status Rank
S3B,S1N
Breeding populations Vulnerable in New York - A migratory animal vulnerable to disappearing as a breeder from New York due to rarity or other factors (but not currently imperiled); typically 21 to 80 breeding populations or locations in New York, few individuals, restricted range, few remaining acres (or miles of stream), and/or recent and widespread declines. Nonbreeding (wintering) populations are critically imperiled in New York.
Global Conservation Status Rank
G4G5
Apparently or Demonstrably Secure globally - Uncommon to common in the world, but not rare; usually widespread, but may be rare in some parts of its range; possibly some cause for long-term concern due to declines or other factors. More information is needed to assign either G4 or G5.

When Least Bitterns are alarmed, instead of flying away they often freeze and point their bill upward to blend with the surrounding vegetation.

The first Breeding Bird Atlas (1980-1985) reported 142 blocks and the second Breeding Bird Atlas (2000-2005) reported 129 blocks (Andrle and Carroll 1988 and McGowan and Corwin 2008). It appears that populations have declined by about 9% when comparing the two atlases. One of the most significant threats to this species is loss of appropriate habitat. New York State has lost over half of its wetlands since colonization (Tiner 1984 cited in NatureServe 2003).

The first Breeding Bird Atlas (1980-1985) reported a total of 142 blocks with 62 of those blocks as probable or confirmed breeding (Andrle and Carroll 1988). The second Breeding Bird Atlas reported Least Bitterns from a total of 129 blocks. Seventy-two of those blocks were reported as probable and confirmed breeding (Andrle and Caroll 1988 and McGowan and Corwin 2008). A comparison of the two atlases shows a 9% decline in blocks in the state (McGowan and Corwin 2008). Least Bitterns are likely overlooked during breeding bird surveys because they rarely vocalize and so, are often not heard. Least Bittern data from the Breeding Bird Survey (BBS) are too few to assess population trends in New York (Sauer et al. 2007).

Historically, Least Bitterns were considered locally common in marshes of the Great Lakes Plain, the Coastal Lowlands, and the Hudson Valley, and possibly breeding in the Champlain Valley (Eaton 1910). In the southern and western portions of the state, Least Bitterns were considered uncommon and local (Bull 1974). Generally, this species is absent from high elevations. It is difficult to determine long term trends.

New York State has lost over half of its wetlands since colonization (Tiner 1984 cited in NatureServe 2003). More recently, losses of wetlands in the Lake Plains portion of the state have been offset as agricultural lands revert back to wetlands, although net losses of wetlands in the Hudson Valley continue. Emergent marshes, which constitute only five percent of the state's 2.5 million acres, have declined overall. Equally important, the quality of remaining habitat is often degraded by fragmentation, exotic plants, and nutrient enrichment (Riexinger, personal communication, October 31, 2003). Run-off from development and agricultural practices may also negatively impact prey. Water level management of Lake Ontario may also change the quality of habitat for Least Bitterns (King 2005). Unnaturally high densities of predators may also pose a threat.

Population distribution, size, and trend studies are needed. Additional studies are needed on the species' breeding biology and movements. Evaluate the effects of invasive species such as common reed and purple loosestrife on breeding populations.

In New York, Least Bitterns tend to breed in shallow or deep emergent marshes, freshwater tidal marshes (lower Hudson River), or brackish tidal marshes (Long Island). They prefer stands of cattails or bulrush with bur-reed, sedges, or common reed. Stands of cattails are often interspersed with pools of open water or slow-moving channels and some woody vegetation. Large marshes are important breeding areas for this species. Open habitats such as mats of emergent vegetation are rarely used (Frederick et al. 1990 cited in NatureServe 2003).

Least Bitterns are largely restricted to the Lake Ontario and St. Lawrence River plains, and the Lower Hudson River Valley with scattered records from Long Island, Lake Champlain, the Finger Lakes, and the Mohawk Valley. They are generally absent from the Appalachian Highlands and mountainous parts of New York State (Andrle and Carroll 1988, Gibbs and Melvin 1992). On rare occasions birds have been reported mid-winter along the coast.

Least Bitterns spend nearly all their time in dense, grass-like vegetation. During the breeding season, the home range of Least Bitterns varies from 4.5-88.2 acres (1.8-35.7 hectares) with an average of 24 acres (9.7 hectares) in New York (Bogner and Baldassarre 2002).

Least Bitterns are rarely seen in New York before late April and after September. The best time to see or hear adults is between May and July. This species is often heard and not seen. On rare occasions birds are reported during mid-winter along the coast.

The time of year you would expect to find Least Bittern active and reproducing in New York.

Bogner, Heidi E. and Guy A. Baldassarre. 2002. The effectiveness of call-response surveys for detecting least bitterns. Journal of Wildlife Management. 66(4):976-984.