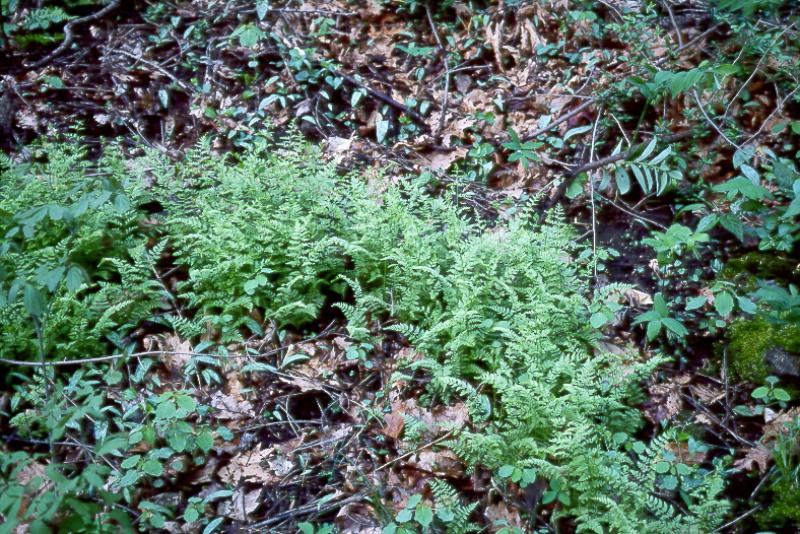 This is one of our plants that, while rare, was also once widespread across the state south of the Adirondacks. There is one occurrence known from eastern Long Island, one from Staten Island, one from Tompkins County, and two from near Lake Erie. The reason for this may be that, while it is common across southern Pennsylvania, it is mostly absent from the northern part of the state with a few populations extending the range of the species into New York.

There is one existing population and it contains thousands of plants. There are three populations from the early 1900s which have not been resurveyed but habitat still exists. A population from 1899 is now extirpated because its habitat no longer exists.

The single population on Staten Island continues to do well.

Only five populations of this fern have ever been known from the state. Of the five only one is currently known to exist.

The known population may be threatened by future development in the natural areas that surround it. This may produce more visitation to the site and introduce unwanted disturbance to the plants.

This fern is currently known from Staten Island with historical records from the North Fork of Long Island in Suffolk County, Tompkins County in the Finger Lakes area, and Erie County in western New York.

This fern is most common from Pennsylvania across the northern Midwest to Iowa and south to Arkansas, Alabama, and western North Carolina and Virginia. It extends south to the panhandle of Florida and into a few areas of South Carolina while reaching its northern limits in New England, New York, and Ontario. The drier climate prevents its spread west from eastern Nebraska, Kansas, and Oklahoma.

Cystopteris protrusa is a fern species with creeping, perennial, yellow-hairy stems. It grows rooted in the soil (as opposed to clinging to rocks or cliffs). Early season leaves are sterile, coarsely divided, and have rounded teeth. Later (late spring and early summer) leaves are larger (up to 45 cm long), finely divided, have sharp-pointed teeth,and are fertile. The pinnae (leaflets) are held roughly perpendicular to the petiole, have toothed margins, and are not hairy or glandular (FNA 1993).

Lowland Fragile Fern can be identified any time the fronds are present.

Lowland fragile fern is our only Cystopteris species that grows on the forest floor rather than on rocks or cliffs, and whose stem has yellow hairs and protrudes past the current season's frond.

The time of year you would expect to find Lowland Fragile Fern vegetative and fruiting in New York.