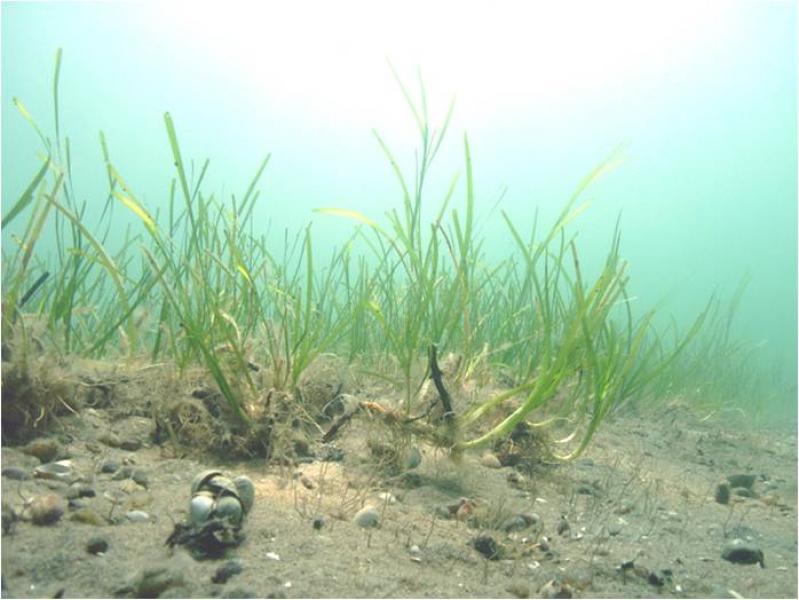 There are estimated to be over 21,000 acres of eelgrass in New York; there may be as many as 30 extant occurrences of marine eelgrass meadow statewide. The few documented occurrences of this community have good viability and are somewhat protected in the waters adjacent to public or private conservation land. The community is restricted to the ocean surrounding Long Island in the North Atlantic Coast ecoregion; it is found in the Peconic Estuary, Long Island Sound, and the South Shore Estuary. The aerial extent and ecological integrity of this community is very rapidly to severely declining; an estimated 90% of New York's eelgrass meadows have been lost between 1930 and the present. Threats to the community include decreased water quality, increased nutrient inputs, physical disturbance from fishing and shellfishing gear, and harmful algal blooms.

The aerial extent and ecological integrity of this community is very rapidly to severely declining. While historical seagrass acreage in New York has not been documented, historical photography and records indicate that there may have been 200,000 acres in 1930; today, only a little more than 20,000 acres remain. This is due, in part, to effects from historical seagrass wasting disease and current increased nutrient loading, decreased water quality and clarity, harmful phytoplankton blooms, habitat degradation, and fishing and boating disturbances (New York State Seagrass Task Force 2009).

Prior to the 1930s, marine eelgrass meadows in the waters surrounding New York are assumed to have been relatively extensive (>200,000 acres) and stable (New York State Seagrass Task Force 2009).

Improve water quality by reducing or eliminating sewer and stormwater discharge and pesticide/herbicide application. Set guidelines and gear restrictions to minimize disturbances from shellfishing, boating, and dredging. Reduce or mitigate shoreline development and armoring as much as possible. Monitor the spread of invasive exotic species in this community, particularly tunicate colonies (Didemnum spp.) and macroalgae (Codium fragile) and, as needed, control their encroachment. Include marine eelgrass meadow restoration and long term monitoring in Harbor Management Plans, as appropriate. A comprehensive management plan for the Peconic Estuary is available as a model (Stephenson 2009).

Strive to minimize or eliminate hardened shorelines and maintain low-sloped shorelines within the tidal zone; healthy marine eelgrass meadows will slow ocean currents and reduce shoreline erosion. Maintain functional connectivity between the open ocean and bays with marine eelgrass meadows to enable full tidal flushing during each tidal cycle. For example, barriers such as railway causeways should have numerous culverts to allow sufficient hydrologic connectivity. If flow restriction devices are needed, those that are calibrated for local tidal hydrology can be used. This community is best protected as part of a large complex. Protected areas should encompass coastal, nearshore, and deepwater marine habitats to ensure connectivity and allow dynamic ecological processes to continue. Connectivity to brackish and freshwater tidal communities, upland beaches and dunes, and to shallow offshore communities should also be maintained. Connectivity between these habitats is important not only for nutrient flow and seed dispersal, but also for animals that move between them seasonally. Development of site conservation plans that identify local threats and their sources and provide management and protection recommendations would ensure their long-term viability. Address seagrass protection in Local Waterfront Revitalization Programs where appropriate (NYS Seagrass Task Force 2009).

Extensive inventory is needed, with focus on the Peconic Estuary, Long Island Sound, and the South Shore Estuary. Existing digital maps of the three estuaries (Long Island Sound and South Shore Estuary circa 2002 and Peconic Estuary circa 2000) should be used as leads. The New York State Seagrass Task Force recommends that inventories be repeated every three years.

A significant amount of research on marine eelgrass meadow threats and stressors, recolonization, disturbance, restoration, genetics, and ecology has been suggested (from New York State Seagrass Task Force 2009). Studies are needed to determine impacts from channel dredging operations, specifically whether local operations actually improve water quality through increased tidal flushing. The ability of eelgrass beds to migrate in response to sea level rise, particularly in areas with hardened shorelines, should be investigated, as should their carbon dioxide uptake potential. Potential impacts of recently-arrived exotic species, like Didemnum spp. (a filter-feeding, colonial tunicate that forms dense, smothering mats), need to be explored. Research should be conducted to determine the effects of multiple stressors on eelgrass, to determine the genetic diversity of eelgrass in and between estuarine systems, and to determine the causes of exacerbated wasting disease or other potential diseases affecting eelgrass. The concentration at which pesticides and herbicides become toxic to eelgrass should be determined. Relationships, (positive, negative, and neutral) between biota (including epiphytes, grazers, and bioturbators) and eelgrass should be established. Ground- and surface-water monitoring should be conducted to determine whether inputs are negatively affecting eelgrass meadows, either directly or indirectly. Causes of eelgrass disappearance from seemingly suitable sites in the Peconic Estuary (Southold Bay, Three Mile Harbor, and Northwest Harbor) should be conclusively determined (Pickerell and Schott 2008). More data on other marine shallow water communities with very little or no eelgrass (e.g., marine macroalgae beds) are needed (Edinger et al. 2002).

This community occurs in subtidal habitat along the north and mid-Atlantic coast. It has a wide distribution in coastal waters from Maine to North Carolina and occurs in large patches in sheltered near-shore estuarine waters (NatureServe 2009).

Known examples of this community have been found at elevations between -12 feet and -2 feet. 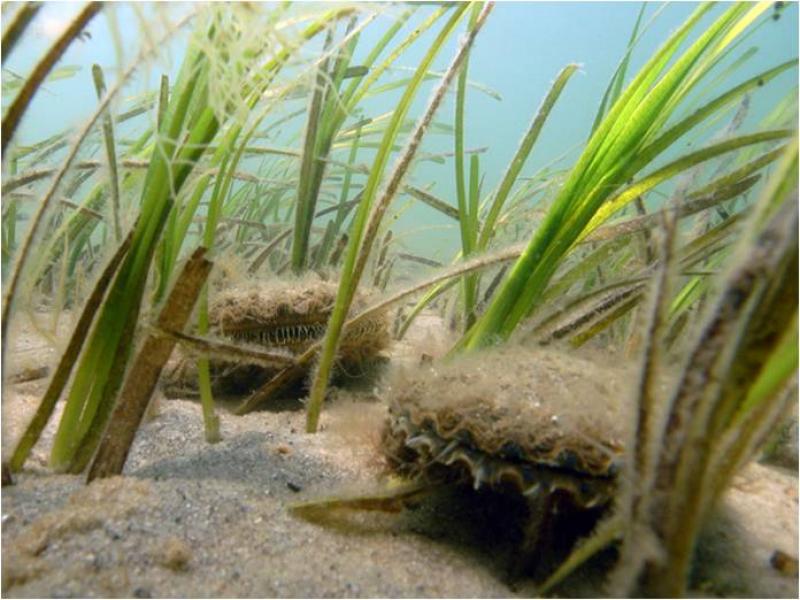 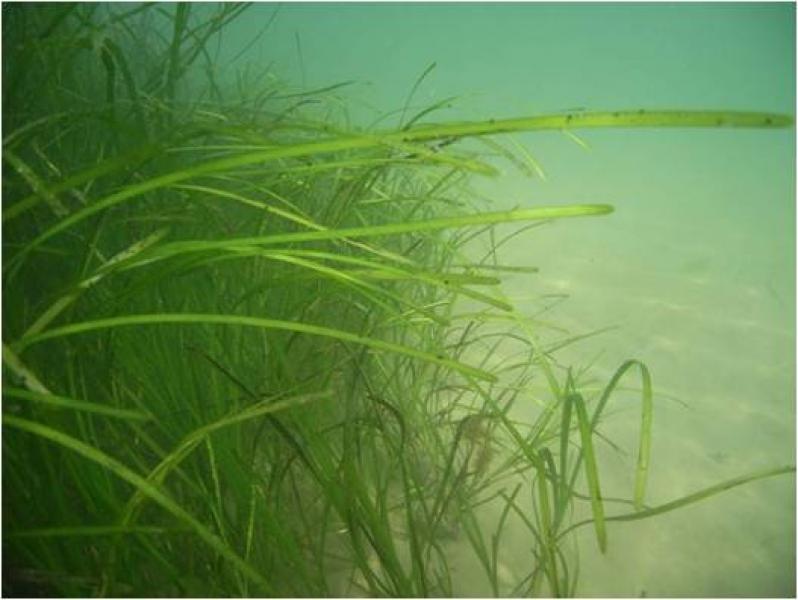 This figure helps visualize the structure and "look" or "feel" of a typical Marine Eelgrass Meadow. Each bar represents the amount of "coverage" for all the species growing at that height. Because layers overlap (shrubs may grow under trees, for example), the shaded regions can add up to more than 100%.

Thorne-Miller, B., M. M. Harlin, G. B. Thursby, M. M. Brady-Campbell, and B. A. Dworetsky. 1983. Variations in the distribution and biomass of submerged macrophytes in five coastal lagoons in Rhode Island, USA. Botanica Marina 26:231-242.

Information for this guide was last updated on: May 14, 2020