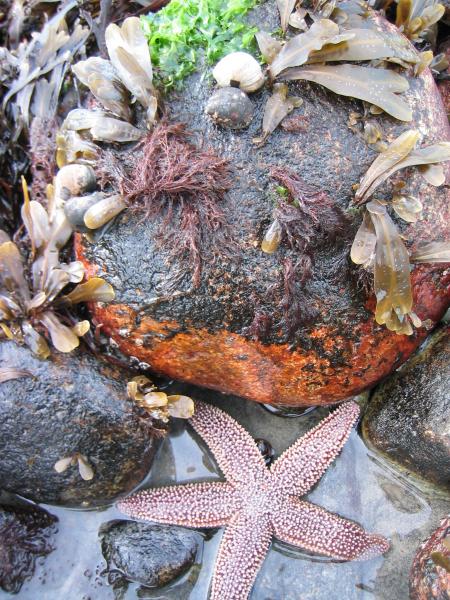 State Conservation Status Rank
S1?
Critically Imperiled in New York (most likely) - Conservation status is uncertain, but most likely especially vulnerable to disappearing from New York due to extreme rarity or other factors; typically 5 or fewer populations or locations in New York, very few individuals, very restricted range, very few remaining acres (or miles of stream), and/or very steep declines. More information is needed to assign a firm conservation status.
Global Conservation Status Rank
G5
Secure globally - Common in the world; widespread and abundant (but may be rare in some parts of its range).

Organisms of marine rocky intertidal environments are adapted to survive under particularly dynamic conditions. The organisms (e.g., algae, sea stars, barnacles, mussels) of this community are exposed to moisture changes, temperature extremes, wave energy, and water salinity changes. For example, as the water recedes during low tide, pools remain in the low spots of the rocky substrate. The organisms that spend low tide within these pools face heat and desiccation stress as the water warms from the sun and evaporates, concentrating the salt levels to a level higher than that of the ocean. Following a heavy rain, however, the water salinity of the tide pools may become close to that of freshwater.

There are an estimated 10 to 20 extant occurrences statewide. A few documented occurrences have good viability, but the level of protection of most occurrences is uncertain. This community has a very limited distribution in the state and is restricted to the portions of the state that have rocky ocean shorelines. There are at least three large, high quality examples (Fishers Island, Plum Island, and Montauk Point). The current trend of this community is probably stable in the short term, but may decline slightly in the future due to moderate threats that include alteration of the natural shoreline, invasive species, and sea level rise.

The number and acreage of marine rocky intertidal communities in New York have probably remained stable in recent decades as a result of coastal protection regulations, although some examples may be reduced in size by the spread of non-native invasive marine algae.

The number and acreage of marine rocky intertidal communities in New York has probably declined moderately from historical numbers likely correlated to the alteration of the ocean shoreline by development.

Where practical, establish and maintain a natural shoreline buffer to reduce storm-water, pollution, and nutrient run-off, while simultaneously capturing sediments before they reach the rocky shore. Buffer width should take into account the erodibility of the surrounding soils, slope steepness, and current land use. Avoid habitat alteration within the intertidal area and surrounding landscape. Restore sites affected by unnatural disturbance (e.g, remove obsolete sea walls and drain pipes in order to restore the natural tidal regime). Prevent the spread of invasive exotic species into the intertidal area through appropriate direct management.

When considering development activities, minimize actions that will change what water carries and how water travels to the rocky shore. Water traveling over-the-ground as run-off usually carries an abundance of silt, clay, and other particulates during (and often after) a construction project. While still suspended in the water, these particulates make it difficult for aquatic animals to find food; after settling to the bottom, these particulates bury small plants and animals and alter the natural functions of the community in many other ways. Development activities near this community type should strive to minimize particulate-laden run-off into this community. Water traveling on the ground or seeping through the ground also carries dissolved minerals and chemicals. Fertilizers, detergents, and other chemicals that increase the nutrient levels in tidal areas. Herbicides and pesticides often travel far from where they are applied and have lasting effects on the quality of the natural community.

Survey for occurrences statewide to advance documentation and classification of marine rocky intertidal areas. A statewide review of marine rocky intertidal communities is desirable. Minimally, revisit sites with records older than ten years, and ideally collect plot data for all occurrences across littoral zones. Continue searching for large sites in good condition (A- to AB-ranked).

Research the influence that sea level rise has on the structure and composition of marine rocky intertidal areas. Research is needed to determine the distribution and invasiveness of Codium fragile and other non-native organisms to this community. Research composition of marine rocky intertidal areas statewide in order to characterize floral and faunal variations across the littoral gradient.

This community is restricted to the rocky ocean shores in Bronx, Westchester, and Suffolk counties. The largest examples are found on Fishers Island, Nappeague Bay, and Plum Island.

The marine rocky intertidal community occurs along the Atlantic coast from New York to Labrador.

A rocky intertidal shoreline exposed to high-energy wave action. Often 60% or more of the rocky substrate is covered with attached organisms, such as algae, mussels, barnacles, sea stars, and other invertebrates. At low tide, rocky intertidal communities have isolated tide pools that contain algae and animals, which are trapped until the next high tide.

Known examples of this community have been found at elevations between -4 feet and 17 feet.

Rocky marine intertidal communities can be observed throughout the year, but during the warm months, when the water is warm enough for wading, this community is particularly pleasant and interesting to explore. At low tide, isolated tide pools remain in the low spots of the rock, and a variety of algae, invertebrate animals, and fish can be easily observed. 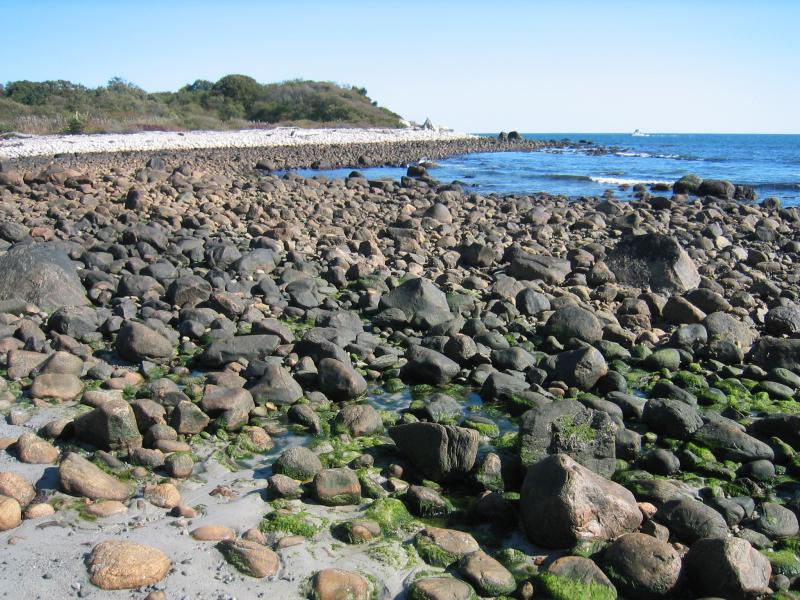 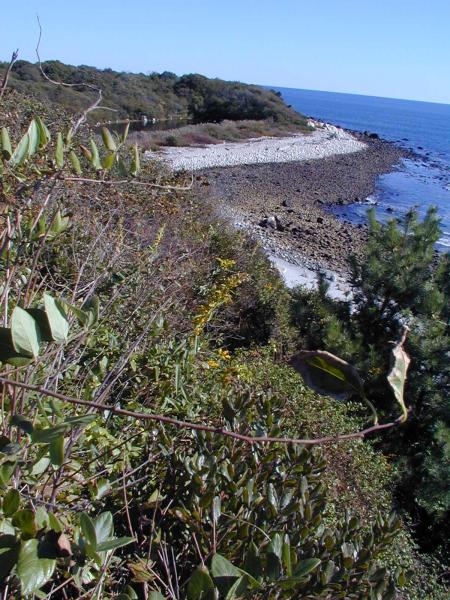 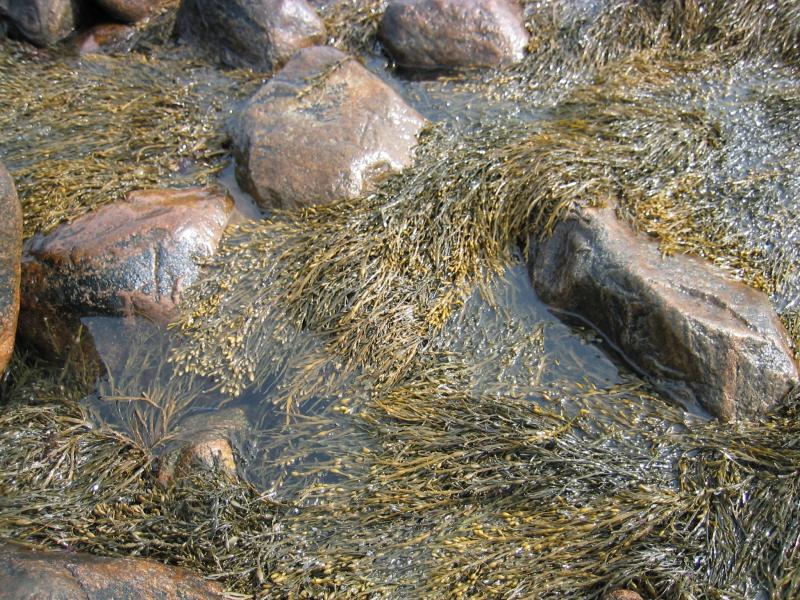 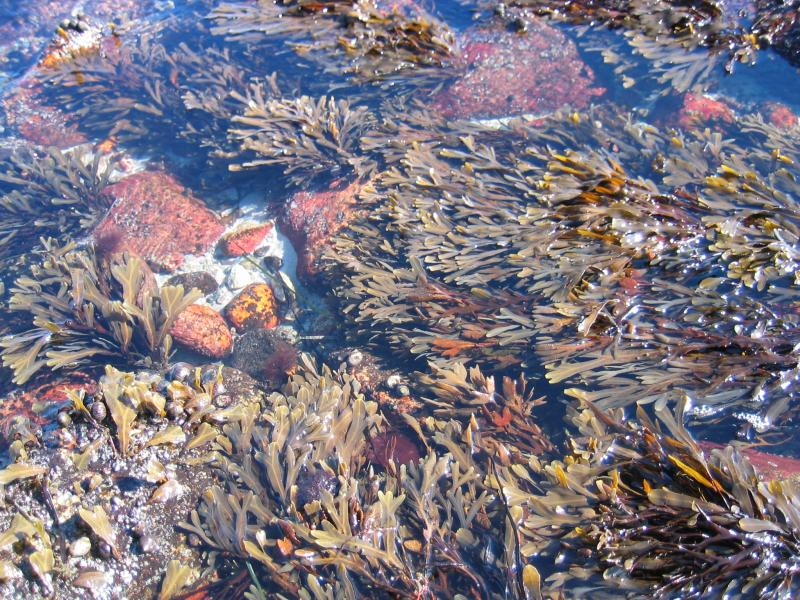 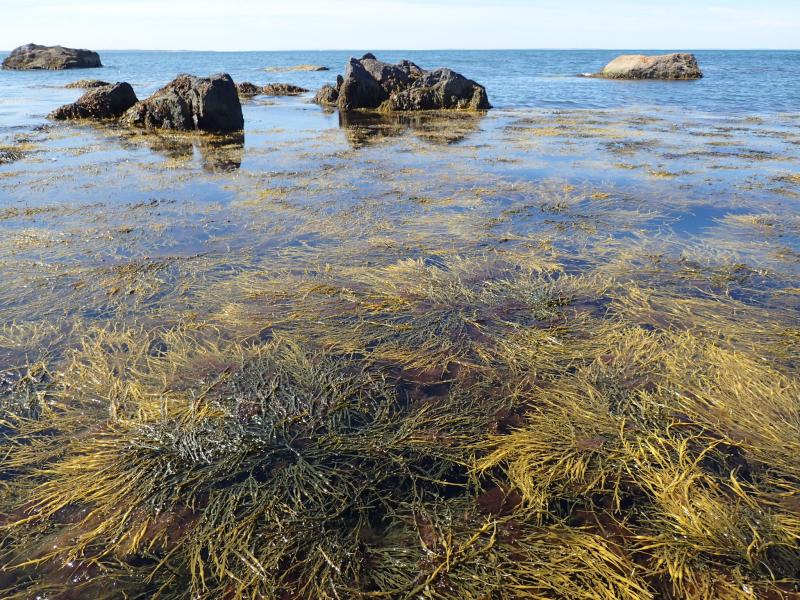 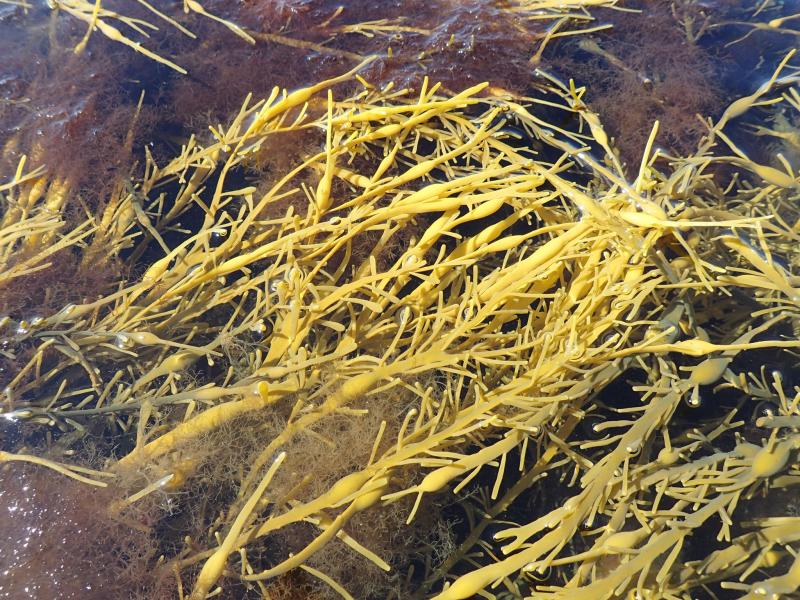 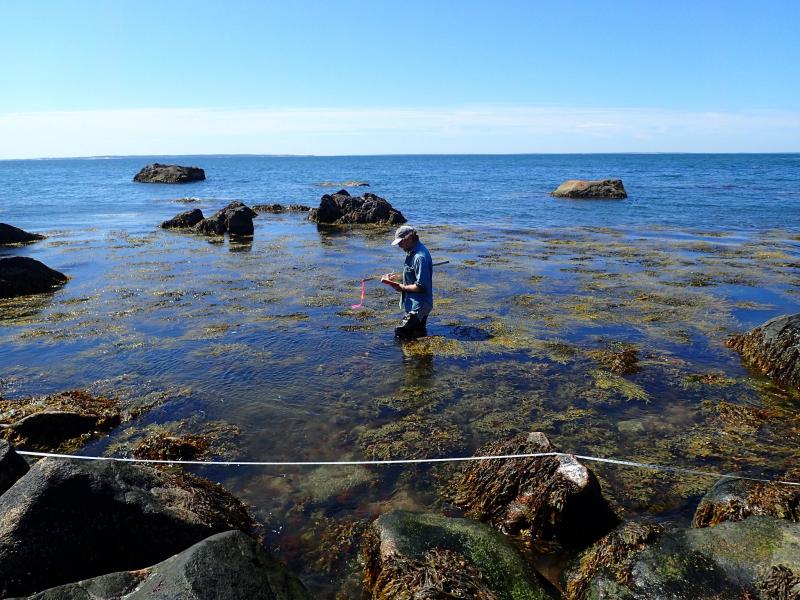 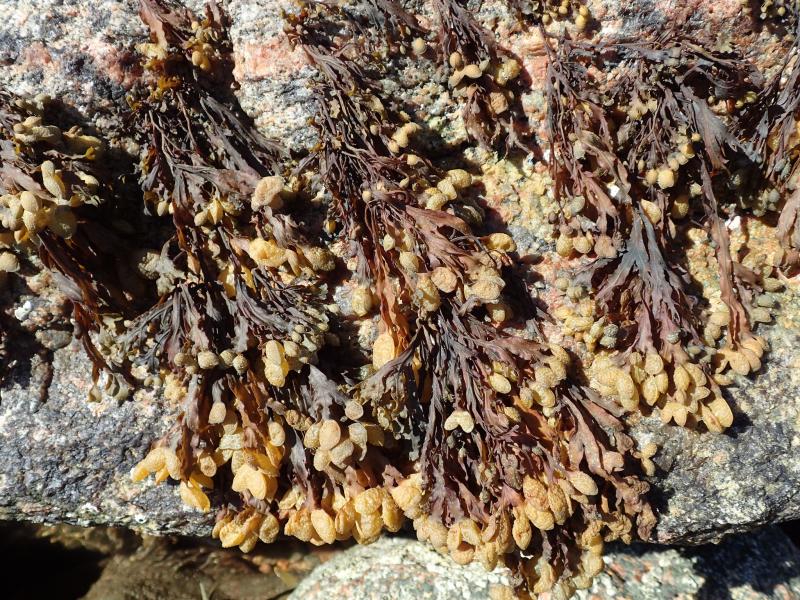 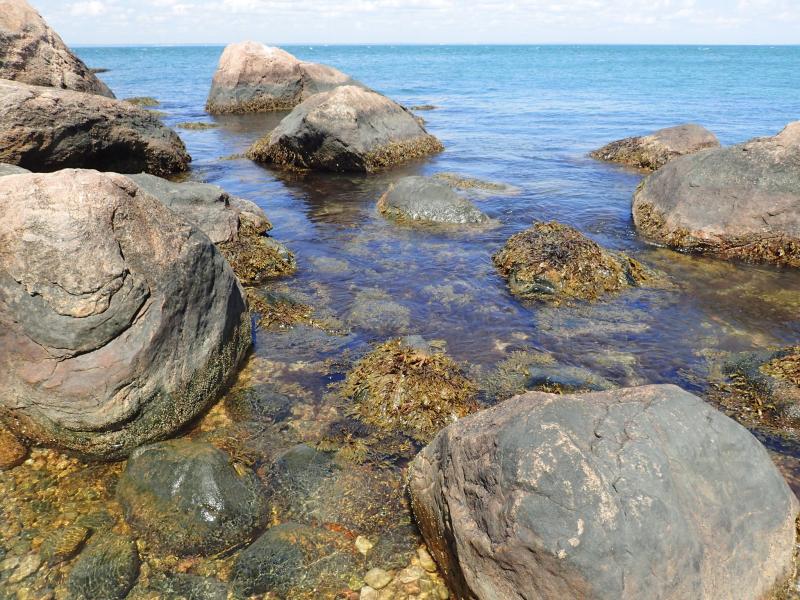 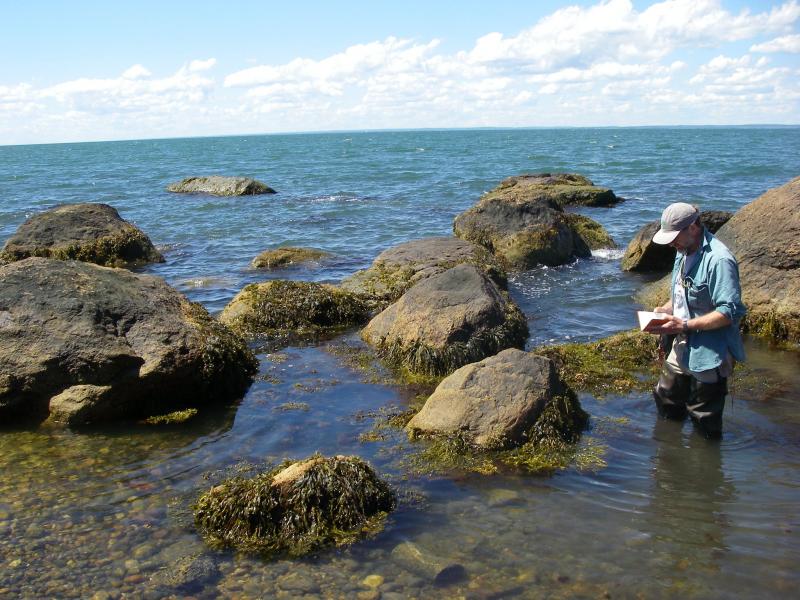 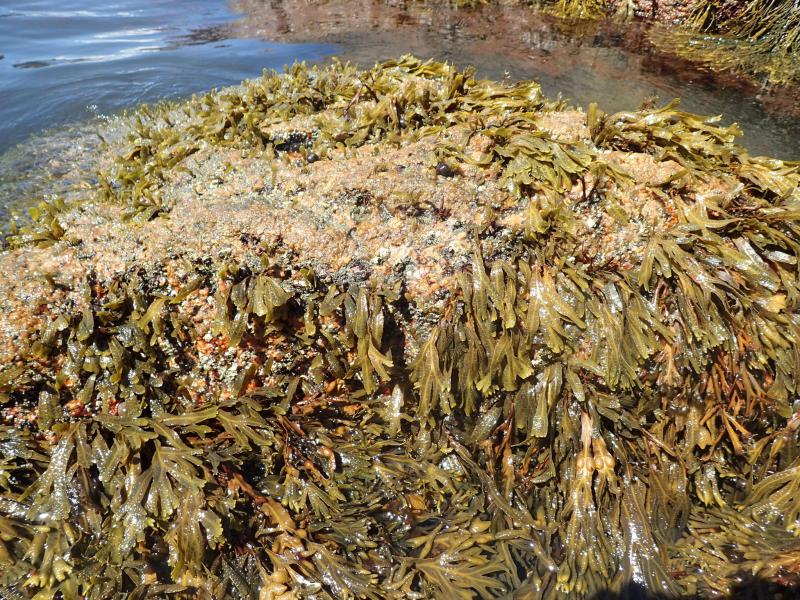 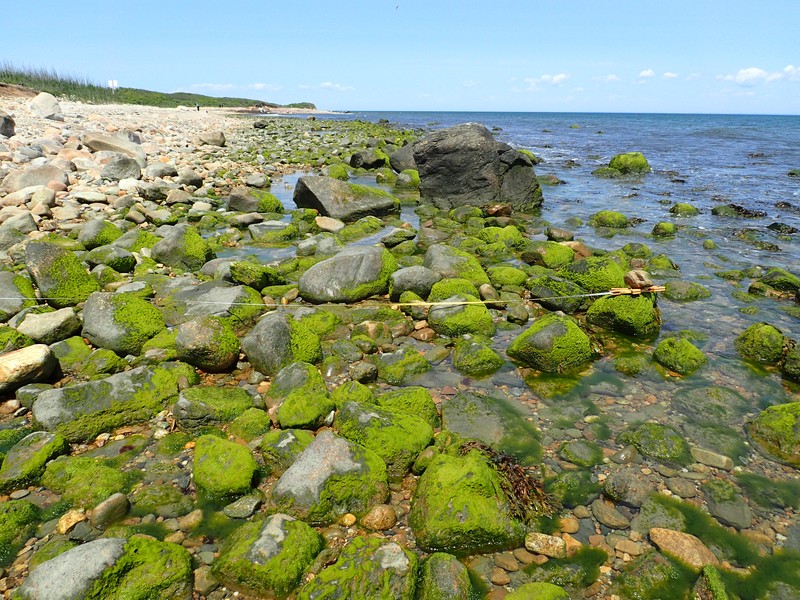 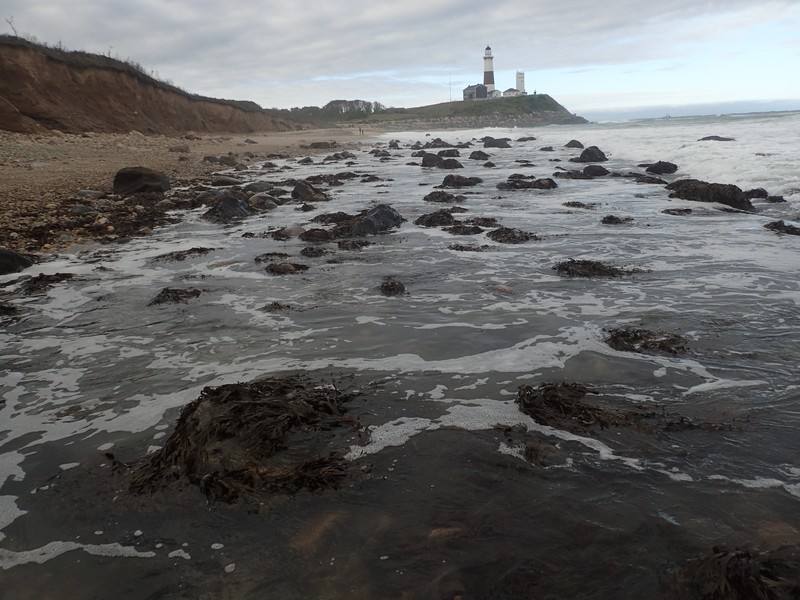 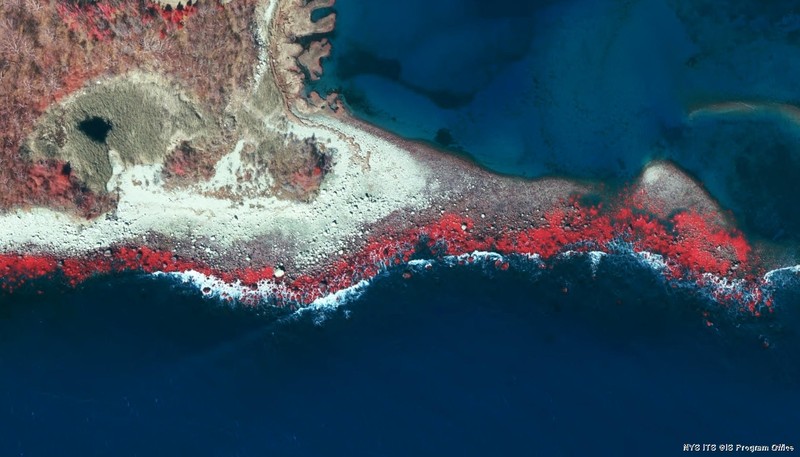 This figure helps visualize the structure and "look" or "feel" of a typical Marine Rocky Intertidal. Each bar represents the amount of "coverage" for all the species growing at that height. Because layers overlap (shrubs may grow under trees, for example), the shaded regions can add up to more than 100%.

White, S.K. (ed.). 2003. Life Between the Tides: marine plants and animals of the northeast. Tilbury House Publishers, Gardiner, ME.