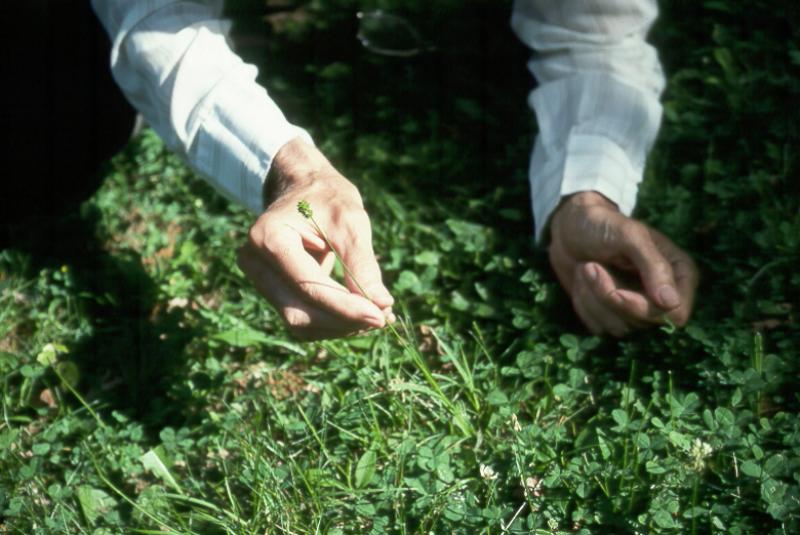 Humans may be contributing to the increased abundance of this sedge since one of the habitats it seems to prefer is abandoned fire pits. The specific name means midland and refers to its range.

There are currently eight known populations of this relatively new arrival to New York State. At this time, we consider the presence of the sedge as the natural range extension of a sedge native to the Midwest. If this plant continues to spread, we may find new populations elsewhere within the state. Few threats are reported. This sedge seems to withstand fire and mowing, so it is rather resilient.

Populations that have been surveyed more than once are stable. Based on past trends (see long-term trends), we should expect to find more populations in the future.

Some sources suspect that this sedge is not native at the northern and eastern limits of its range. This sedge was first collected in New York in 1924 and again in the 1960s. Today we know of at least eight populations. Whether this is a non-native plant (introduced into the state due to direct human actions) or just the result of a natural range extension is not known. Based on this trend though, we should expect to find more populations in the future.

A few populations may be threatened by invasive plants, especially black swallowwort. The majority of populations are not threatened.

This is a disturbance-loving species. Disturbance needs to be maintained and exotic species eliminated.

There has been considerable debate on whether this taxon is best treated as a full species (Carex mesochorea) or as a variety (Carex cephalophora var. mesochorea). A full taxonomic study of these two taxa is warranted, along with a complete herbarium review to verify the identity of each specimen. Once this review is complete, a study on the habitat requirements and northeastern distribution will be more possible. According to Flora of North America, this sedge is probably not native at the northern and eastern limits of its range. Since New York is near both the eastern and northern range limits, its nativity should be further evaluated. This may simply be due to natural range extension.

A sedge known from Long Island to the Hudson Highlands and central New York. This sedge may be more common than its state rank would indicate, but few people are searching for this sedge.

A sedge ranging from southern Quebec and Ontario, south to Maryland, West Virginia, Tennessee, Arkansas, and Texas, west to Wisconsin and Nebraska. Also known from the mountains of South Carolina.

This sedge has stiff stems up to 1 meter long that stick out more than twice as long as the dense clump of narrow leaves. The fruiting spikes are crowded at the top of the stem in a dense oval head 0.7-1.8 cm long. Each individual flower bract (perigynium) is 3-3.5 mm long and 2-2.5 mm broad and concealed from below by a scale with long narrow tips.

A sedge of dry upland habitats with stiff stems up to 1 meter long and more than twice as long as the leaves. The plants are densely cespitose with leaves 2-5 mm wide. The fruiting spikes are crowded in a dense ovoid head that is 0.7-1.8 cm long. The sheaths are thickened at the summit with ligules up to 3 mm long. The scales of the spike are long-awned and the pistillate scales have three distinct nerves near the center. The scale body is equal to or nearly equal to the perigynia, thus concealing it. The perigynia is 3-3.5 mm long and 2-2.5 mm broad.

The entire plant, with mature achenes, is needed for proper identification.

This sedge flowers in spring, with fruits appearing by late spring to early summer. The fruits begin to fall off the plant by late summer, often losing many of the perigynia during the collection process. Field surveys should be conducted from late June to early August.

The time of year you would expect to find Midland Sedge fruiting in New York.

Due to the similar morphologic features and frequent identification confusion, some authors understandably treat this as a variety of Carex cephalophora. Additional taxonomic work is needed to determine the proper relationship of these taxa.