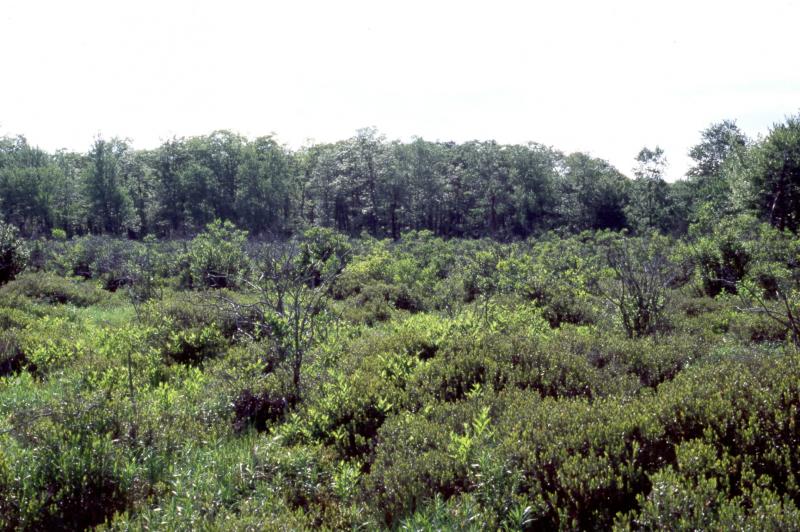 Of the temperate fruits, highbush blueberries have one of the highest concentrations of iron. Medicinal research suggests blueberries can relieve fevers, prevent cataracts, improve short term memory loss, reverse loss of balance and coordination, and treat varicose veins, hemorrhoids, and peptic ulcers. They are also known to benefit eyesight, be good blood cleansers, and improve circulation.

There are several hundred occurrences statewide. There are some documented occurrences that have good viability and several are protected on public land or private conservation land. This community has statewide distribution, and includes a few, large, high quality examples. The current trend of this community is probably stable for occurrences on public land, or declining slightly elsewhere due to moderate threats related to development pressure or alteration to the natural hydrology.

The numbers and acreage of highush blueberry bog thickets in New York have probably remained stable in recent decades as a result of wetland protection regulations.

The numbers and acreage of highush blueberry bog thickets in New York probably declined moderately from historical numbers likely correlated with the onset of agricultural and residential development.

Because highbush blueberry bog thickets are relatively acidic and low in nutients, they are susceptible to alteration by elevated nutrient inputs. Bog thickets may require larger buffers than other wetland types because of their high suceptibility to changes in nutrient concentrations.

Where practical, establish and maintain a natural wetland buffer to reduce storm-water, pollution, and nutrient run-off, while simultaneously capturing sediments before they reach the wetland. Buffer width should take into account the erodibility of the surrounding soils, slope steepness, and current land use. Wetlands protected under Article 24 are known as New York State "regulated" wetlands. The regulated area includes the wetlands themselves, as well as a protective buffer or "adjacent area" extending 100 feet landward of the wetland boundary (NYS DEC 1995). If possible, minimize the number and size of impervious surfaces in the surrounding landscape. Avoid habitat alteration within the wetland and surrounding landscape. For example, roads and trails should be routed around wetlands, and ideally should not pass through the buffer area. If the wetland must be crossed, then bridges and boardwalks are preferred over filling. Restore highbush blueberry bog thickets that have been unnaturally disturbed (e.g., remove obsolete impoundments and ditches in order to restore the natural hydrology). Prevent the spread of invasive exotic species into the wetland through appropriate direct management, and by minimizing potential dispersal corridors, such as roads.

Survey more occurrences and collect plot data that may support splitting this community into inland and Coastal Plain types. Inventory examples with little to no highbush blueberry (Vaccinium corymbosum) and resolve the classification of those types.

Future research on highbush blueberry bog thickets should explore the role of fire, frost, and coastal storms on the vegetation composition. Plot data and regional studies suggest basins supporting shrub swamps may be tightly related to Atlantic white cedar-dominated wetlands (Motzkin 1991). Highbush blueberry bog thickets may have previously been cedar-dominated wetlands, and may shift to cedar-dominated wetlands in the future. Understanding the role of disturbance in forming this community may help long-term planning and conservation of the variety of vegetation expressed within these sites. Lastly, it may be desirable to critically compare statewide plot data for highbush blueberry bog thicket to justify the creation of a new state community type (MacDonald and Edinger 2000).

This community is currently known from the lower Hudson Valley within the Hudson Highlands and Shawangunk Mountains. Highbush blueberry bog thickets are also known from across the High Allegheny Plateau, the Eastern Ontario Lake Plain, and the Lake George Valley. Coastal plain variants of this community are known from eastern Long Island.

This somewhat broadly-defined community may be widespread throughout the eastern United States. Examples with the greatest biotic affinities to New York occurrences are suspected to span north possibly to southern Canada, west to Minnesota, southwest to Indiana and Tennessee, southeast to Georgia, and northeast to southern Maine.

An ombrotrophic or weakly minerotrophic peatland dominated by tall, deciduous, ericaceous shrubs and peat mosses; the water is usually nutrient-poor and acidic. The dominant shrub is usually highbush blueberry. At least three regional variants are recognized in New York. The first is found throughout central and western New York, the second is primarily a northern variant, and the third is a southern variant with coastal plain species.

A peatland that is dominated by tall (2 m) highbush blueberry (Vaccinium corymbosum) shrubs.

Known examples of this community have been found at elevations between 5 feet and 1,876 feet.

Summer and fall are great times to visit these thickets. Beginning in late June, highbush blueberries produce many large and delicious berries. In the fall their foliage turns from the green tones of summer to brillant shades of red and orange. 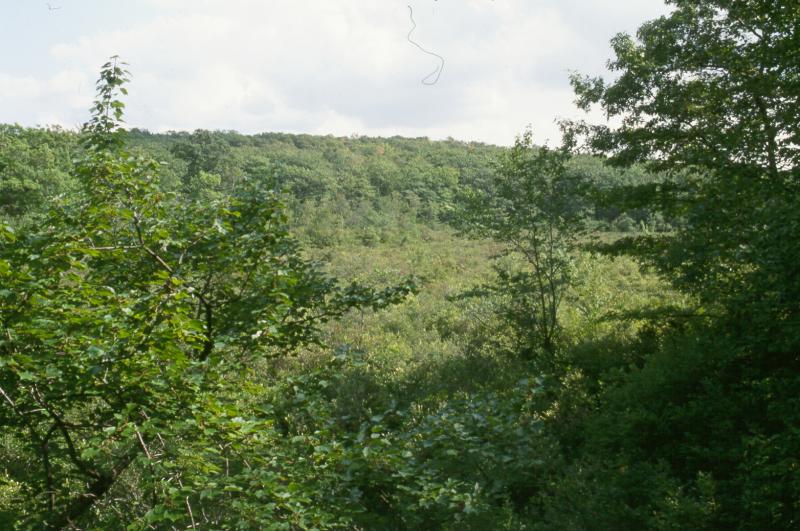 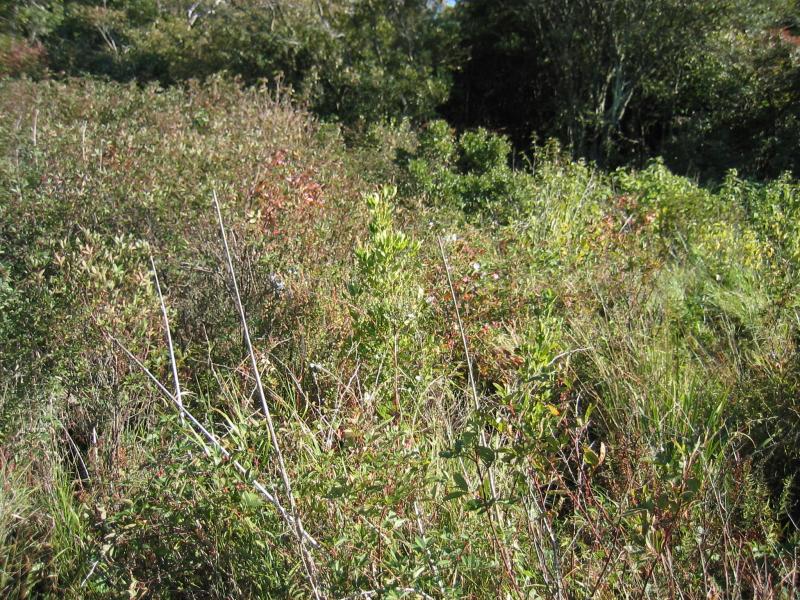 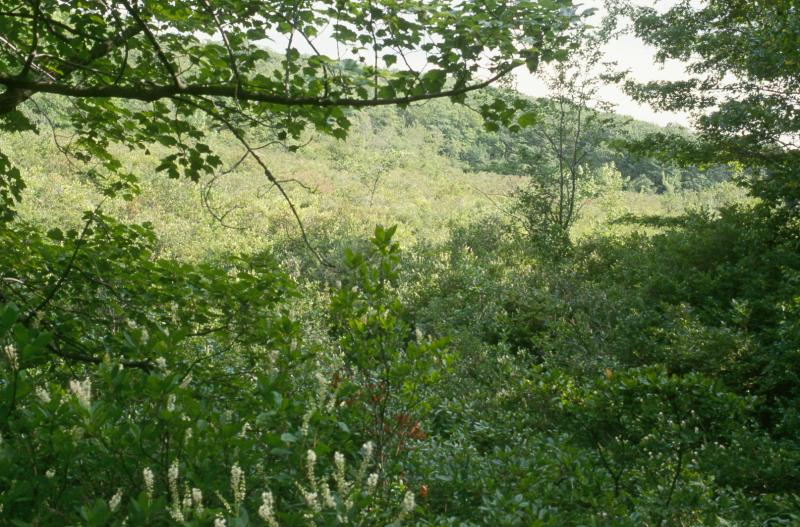 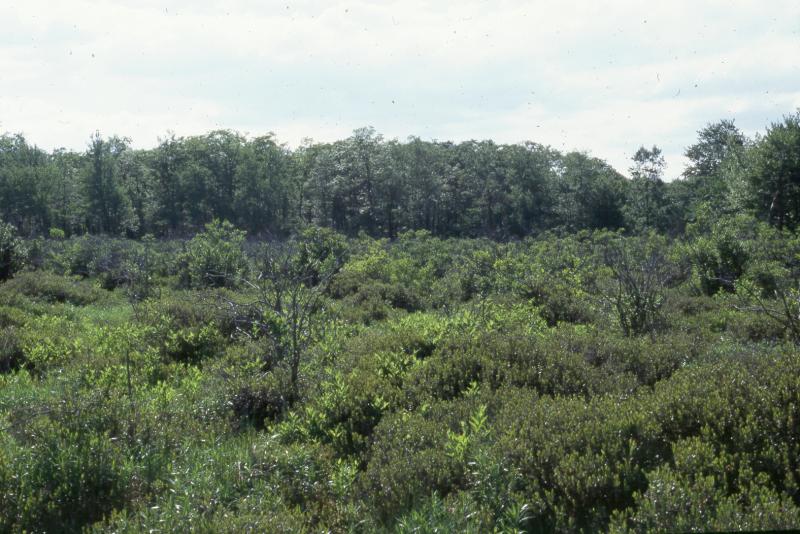 This figure helps visualize the structure and "look" or "feel" of a typical Highbush Blueberry Bog Thicket. Each bar represents the amount of "coverage" for all the species growing at that height. Because layers overlap (shrubs may grow under trees, for example), the shaded regions can add up to more than 100%.