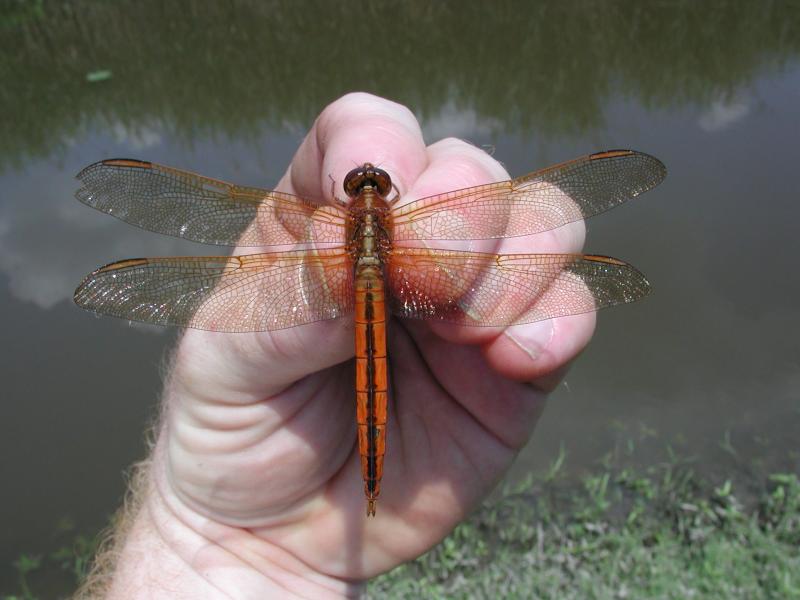 This species of dragonfly was named after James Needham, a famous American entomologist (Dunkle 2000).

Needham's Skimmer is known to occur in nine locations in Richmond, Rockland, Putnam (two locations), and Suffolk counties since 1997 (New York Natural Heritage Program 2007). The species is also known to occur in Kings, Orange, and Westchester counties (Donnelly 1999). Population estimates have not been determined. Further survey efforts may result in the identification of additional populations or range expansions and may enable population sizes to be determined.

No estimate of population size has been made for Needham's Skimmer based on observations from 1997 to present (New York Natural Heritage Program 2007). Information prior to this time frame is limited. Therefore, any new location information on Needham's Skimmer in New York may reflect heightened interest in surveying for this species rather than a population increase or a range expansion (Holst 2005).

Nine recent observations of Needham's Skimmers have been made in Putnam, Richmond, Rockland, and Suffolk counties since 1997 (New York Natural Heritage Program 2007). The species is also known to occur in Kings, Orange, and Westchester counties (Donnelly 1999). Since there is limited historical information, few recent records, and the full extent and size of the populations have not been determined, long-term trends are unclear.

Any activity which might lead to water contamination or the alteration of natural hydrology could affect Needham's Skimmer populations. Such threats might include "...ditching, filling, eutrophication...", agricultural run-off or other chemical contamination, increases in sedimentation, and changes in dissolved oxygen content (Holst 2005).

Any measures to reduce water contamination or hydrological alteration such as chemical contamination from agricultural run-off should be considered when managing for this species (Holst 2005).

Further research is required to understand the habitat requirements and threats to this species, and to create appropriate management guidelines for its persistence in known locations (Holst 2005).

Needham's Skimmer is a coastal species that inhabits ponds, lakes, tidal river areas, and brackish wetlands in New York State (Dunkle 2000, New York Natural Heritage Program 2007, Nikula et al. 2003). Larvae are aquatic and found in the water during this lifestage, whereas adults are terrestrial and are found in habitats surrounding ponds, lakes, and brackish wetlands.

Six recent observations of Needham's Skimmers have been made in Putnam, Richmond, Rockland, and Suffolk counties since 1997 (New York Natural Heritage Program 2007). The species is also known to occur in Kings, Orange, and Westchester counties (Donnelly 1999).

Adult Needham's Skimmers are about 2.1 inches long with reddish-brown eyes. Adult males have a bright red face, a reddish-brown thorax, and a bright reddish-orange abdomen with a black dorsal (top) stripe (Dunkle 2000). Their posterior (rear) wing veins do not become orange, as with Golden-winged Skimmers (Libellula auripennis). The stigma (a blood-filled blister near the tip of the wing) is red. Females and immature males have a brown face and their thorax is brown dorsally with a pale middle stripe and the sides of the thorax are pale. They have a yellow face, the front half of their wings are tinged yellow, and they have a yellow abdomen with a black dorsal stripe (Nikula et al. 2003).

Adults of both sexes of Needham's Skimmer are known to forage in marshes in coastal areas. "Males are territorial, and perch horizontally or obliquely from emergent or shoreline vegetation" (Nikula et al. 2003). This is a more coastal species than the Golden-winged Skimmer, which is believed to outcompete it in most habitats (Dunkle 2000).

Needham's Skimmer larvae feed on smaller aquatic invertebrates and adults feed on insects which they capture in flight.

Adult Needham's Skimmers have been found in New York in July and August, but could possibly be seen in late June and early September as well (Nikula et al. 2003, New York Natural Heritage Program 2007).

The time of year you would expect to find Needham's Skimmer present and reproducing in New York.