Latin names for species are often very descriptive. For this species "Litho" means stone and "phane" means to resemble. The second part of the name breaks down into "viridi" meaning green and "pallens" meaning pale. Thus, the name translates to "resembles pale green stone."

The status and trend for this species is unknown for New York State. There are two known areas on Long Island.

The long-term trend for this species is unknown. Little is known about the historical range in New York.

The most significant threats to Pale Green Pinion Moth are habitat loss and fragmentation by commercial and residential development (Massachusetts Division of Fisheries and Wildlife 2015). It has been found in pine barrens habitat, but it is not a barrens specialist (McGuinness 2006). Additionally, hydrological alterations to wetlands, water pollution, non-target herbicide use, insecticide spraying, and invasive plants are all potential threats (Massachusetts Division of Fisheries and Wildlife 2015).

Areas where this species has been found need to be evaluated to avoid additional encroachment or fragmentation by development. Maintain natural seasonal flooding cycles in wetland habitats. Invasive and weedy plants can out compete native food plants, therefore proper management and removal of these species should be considered. The use of herbicides and insecticides to control invasive plants and insects can be done if timed carefully (Schweitzer et al. 2018). Large broadcasting of herbicides or insecticides can cause negative effect to host plant species or cause mortality to non-target insects (Schweitzer et al. 2018). As with managing natural habitats, timing to reduce the impact on the species is important, in addition to providing refugia.

In New York State, the Pale Green Pinion Moth is found only on Long Island. There is one documented location for this species in the dwarf pine barrens. There is another location in the Sag Harbor area (iNatualist 2022). This species is considered more of a generalist occupying many different habitats in the coastal plain including cedar swamps, hardwood swamps, shrub swamps, woodlands, and forests (Wagner 2005). It is often found near stands of Ilex opaca (American holly) or Ilex glabra (inkberry) (D. Schweitzer, personal communication).

In New York, the Pale Green Pinion Moth has been reported from two locations in eastern Long Island (iNaturalist 2022).

This species occurs within 20 miles of coast in Massachusetts, Rhode Island, and on Long Island, New York. It can also be found from southern New Jersey through much of Georgia and west to east Texas. It is unclear how far inland this species occurs, but it seems to occur regularly in northern Georgia and the Raleigh, North Carolina area. Though it has not been found to extend into the Appalachian region. It is probably somewhat common on the coastal plain and piedmont south of Virginia.

Little is known about the diet of Lithophane viridipallens though it is speculated that it consists of a variety of acidic wetland shrubs (Massachusetts Division of Fisheries and Wildlife 2015).

The adult moths are active in the autumn, especially in October and early November.

The time of year you would expect to find Pale Green Pinion Moth present, reproducing, larvae present and active, and pupae or prepupae present in New York. 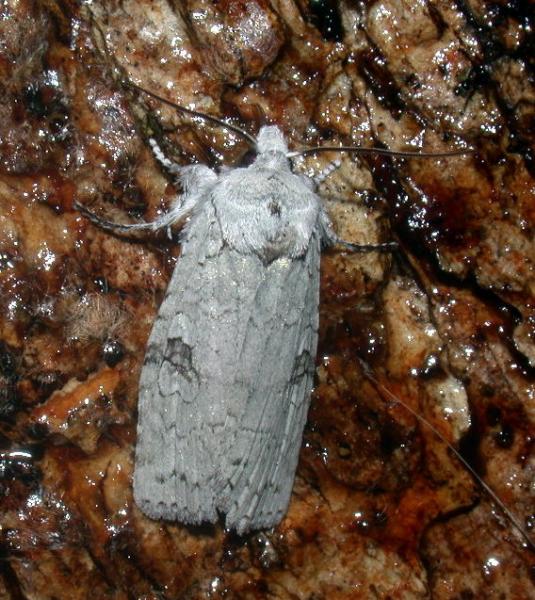 This is a very distinctive species in the Querquera-Baileyi group.

iNaturalist. 2022. iNaturalist data download for Lithophane viridipallens on May 24, 2022.