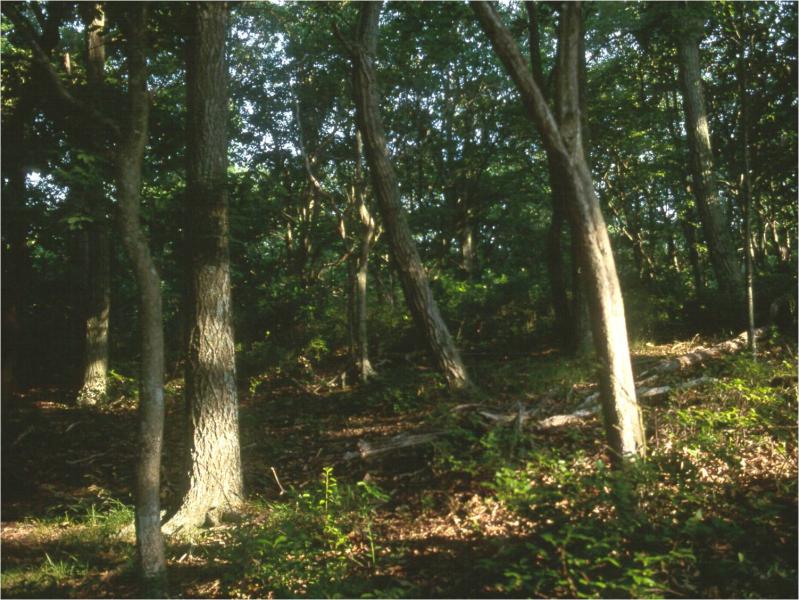 According to the USDA Forest Service's Silvics Manual (1990), "the "national champion" American holly (Ilex opaca), in the Congaree Swamp of South Carolina, is 30.2 m (99 ft) tall with a circumference of 248 cm (98 in), a trunk diameter of 79 cm (31 in), and a crown diameter of 12.2 m (40 ft)." American holly growth within its range on Long Island and other parts of New York is much more limited due to either persistent winds in a severe coastal climate, nutrient deficient soils, and/or periodic or extensive cold or low-growth periods at the northern limit of its range.

There is only one documented occurrence statewide and very few or no additional occurrences are suspected. The known occurrence has good viability and is largely protected on public and private conservation land. The community is restricted to the eastern extreme of the Coastal Lowlands and is concentrated on the Montauk Peninsula, a morainal plateau. While the acreage and extent of coastal oak-holly forest in New York may be increasing slightly, its condition is likely to be decreasing. Overall the community's trend is stable to slightly decreasing. Threats include invasion by exotic species, heavy deer browse, recreational overuse, and development pressures.

While the acreage and extent of coastal oak-holly forest in New York may be increasing slightly, its condition is likely to be decreasing. Overall the community's trend is stable to slightly decreasing. The size of the one known occurrence of this community is suspected to be increasing slightly and very slowly. It is moderately well protected and managed and the surrounding protected lands support successional maritime forest, which appears to be succeeding slowly to this type. Condition, on the other hand, is possibly slowly declining because of heavy deer browse.

The number, extent, and viability of coastal oak-holly forests in New York are suspected to have declined substantially over the long-term. These declines are likely correlated with coastal development and associated changes in landscape connectivity.

Monitor for disturbance by park visitors. Leave downed wood in place and allow forest maturation to an old-growth state. Consider deer exclosures or population management, particularly if studies confirm that canopy species recruitment is being affected by heavy browse. Generally, management should focus on activities that help maintain regeneration of the species associated with this community. Deer have been shown to have negative effects on forest understories (Miller et al. 1992, Augustine and French 1998, Knight 2003) and management efforts should strive to ensure that tree and shrub seedlings are not so heavily browsed that they cannot replace overstory trees.

Surveys for additional examples of this community on the Montauk Peninsula are needed. The primary lead is from the Hither Woods-North site. Secondary efforts should focus elsewhere on the moraine of the South Fork of Long Island and on the barrier islands of the south shore of Long Island.

A critical assessment of the long-term effects of heavy deer browse on this community, particularly addressing canopy species seedling recruitment, is needed.

The community is restricted to the eastern extreme of the Coastal Lowlands and is concentrated on the Montauk Peninsula, a morainal plateau. Known and suspected examples are limited to this peninsula. It is very unlikely to be found elsewhere.

A mixed deciduous-evergreen broadleaf forest that occurs on somewhat moist and moderately well drained silt and sandy loams in low areas on morainal plateaus. The elevation afforded by the raised plateau protects these areas from overwash and salt spray. In New York State, this forest is best developed on the narrow peninsulas of eastern Long Island. The trees are usually not stunted, and are removed from the pruning effects of severe salt spray. The canopy of a mature stand is usually up to about 20 m (65 ft) tall.

Known examples of this community have been found at elevations between 7 feet and 89 feet.

The best time to see this community is when the red berries of American holly (Ilex opaca) ripen, and this occurs between September and December. The berries can be seen through most of the winter as long as migrating birds, such as cedar waxwings, or other wildlife do not consume them. 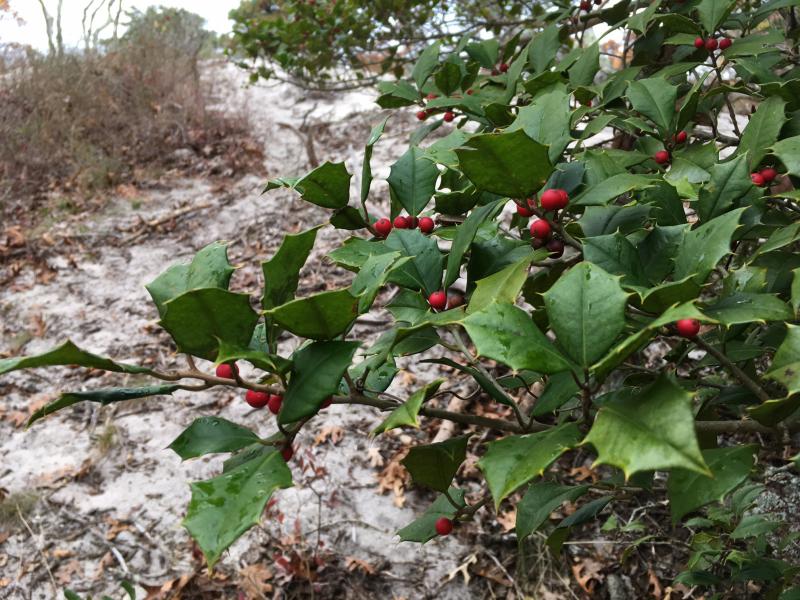 American holly (Ilex opaca) is a native tree that is common in woodlands on Long Island.
Julie A. Lundgren

This figure helps visualize the structure and "look" or "feel" of a typical Coastal Oak-Holly Forest. Each bar represents the amount of "coverage" for all the species growing at that height. Because layers overlap (shrubs may grow under trees, for example), the shaded regions can add up to more than 100%.