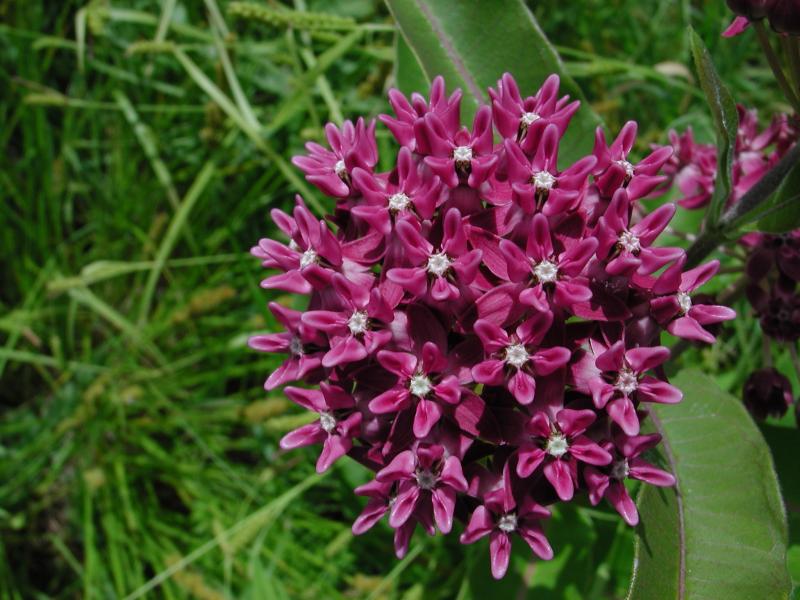 State Conservation Status Rank
S2S3
Imperiled or Vulnerable in New York - Very vulnerable, or vulnerable, to disappearing from New York, due to rarity or other factors; typically 6 to 80 populations or locations in New York, few individuals, restricted range, few remaining acres (or miles of stream), and/or recent and widespread declines. More information is needed to assign either S2 or S3.
Global Conservation Status Rank
G5?
Secure globally (most likely) - Conservation status is uncertain, but most likely common in the world; widespread and abundant (but may be rare in some parts of its range). More information is needed to assign a firm conservation status.

Purple milkweed almost always occurs in small populations with fewer than one hundred plants. New York has the largest population in the nation with over 1000 plants.

There are ten existing populations and 22 historical occurrences. The populations at all but one site are fewer than 30 plants. The New York sites are in areas that are being developed rapidly and have come under threat by invasive species.

Most populations are below 30 plants and grow in areas that are susceptible to succession and invasive species. Most of the populations occur in the Lower Hudson region which is developing rapidly. These factors probably forecast a short-term decline. Fortunately a large population was recently found in Orange County and there is hope that more populations can be found in the area.

The long-term trend has been declining in the last 100 years as areas in the Lower Hudson region and Long Island have been developed. There were 22 historical locations but many of these have been extirpated by development.

Purple milkweed populations are threatened by loss of habitat by development and succession, especially by exotic invasive species.

The hydrologic regime and the open habitat need to be maintained while controlling invasive species.

Research is needed to find out why most populations are fewer than 30 plants and if habitat requirements include soil that is wet in the spring and dry in the summer. A professor at SUNY Cortland is studying the genetic relationships among populations.

Although elsewhere purple milkweed has been characterized as a species of dry habitats, in New York it has been found in a wide diversity of open habitats, from sedge meadows, wet fields, and fens, to dry oak woods, serpentine barrens, and hay meadows (New York Natural Heritage Program 2007, Voss 1996, Gleason and Cronquist 1991).

This species occurs from Maine to southern Ontario in the north and ranges as far south as Georgia and west to Texas.

Purple milkweed is a stout-stemmed, opposite-leaved, perennial herb, growing up to 1 meter tall. Like those of most milkweed species, its leaves and stems bleed its namesake sticky, whitish sap when cut. Its striking purplish-red flowers have the strongly reflexed "upside-down" looking corolla typical of the genus, and are about 1.25 cm long and bright purplish red. Its leaves have dense white pubescence on their undersides.

Asclepias purpurascens is best identified when in flower.

Purple milkweed is most similar to common milkweed (Asclepias syriaca) and swamp milkweed (Asclepias incarnata). It may grow together with either or both of these species in New York. Its purplish-red flowers are much brighter than the whitish pink or purple flowers of common milkweed, and it has glabrous corollas, while the corollas of common milkweed are pubescent on the outside.
Purple milkweed's flowers differ from the flowers of swamp milkweed in having short, inconspicuous horns, in contrast to swamp milkweed's horns which are longer than its hoods (New York Natural Heritage Program 2007, Rhoads and Block 2000, Voss 1996).

With some effort purple milkweed may be identified in vegetative form as well. Purple milkweed's leaves have veins running nearly perpendicular from the midveins, while those of swamp milkweed form a strongly acute angle with the midrib, and purple milkweed's leaves also have net-venation more evident, in contrast to the strongly pinnate veination of common milkweed, though the two species can be difficult to distinguish, and in fact may hybridize (Voss 1996, Newcomb 1977).

The best time to survey for purple milkweed is when it is in bloom, in late June or early July, as its striking flowers are difficult to overlook.

The time of year you would expect to find Purple Milkweed flowering and fruiting in New York. 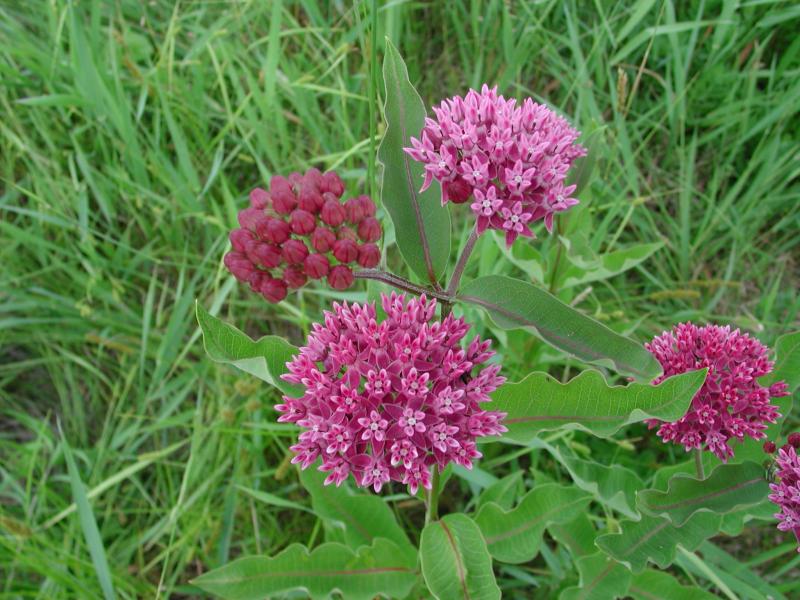 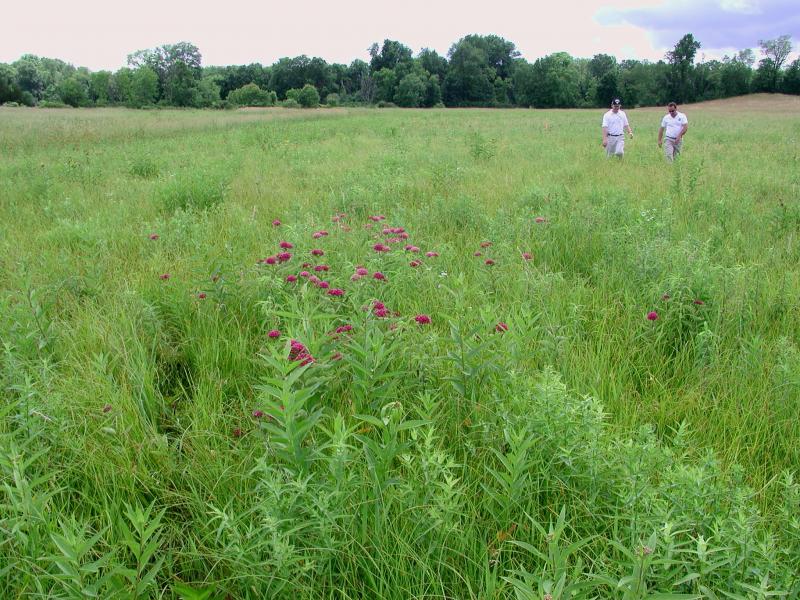