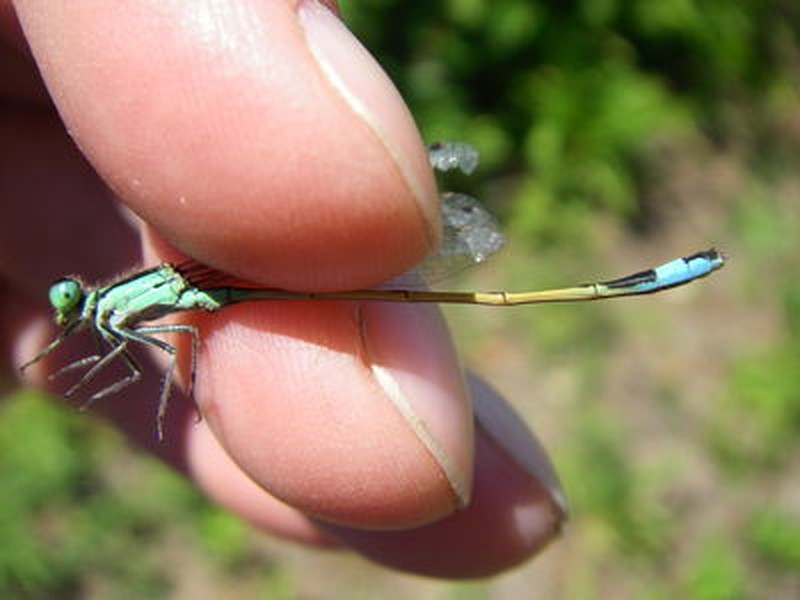 Rambur's Forktail often perches on bare ground and flies along open shorelines, while most forktail species have a different behavior, finding shelter in low, dense vegetation along shores (Lam 2004).

In New York (close to the northern extent of its range), Rambur's Forktails have been confirmed from Richmond, Kings, Queens, Nassau, and Suffolk counties since the 1990s (New York Natural Heritage Program 2010). Older records are from Staten Island and Suffolk County prior to the 1990s (Donnelly 1999). New locations in recent years may be due to increased survey effort rather than a population increase or expansion.

No estimation of population size for this species has been made based on observations from the late 1990s in Richmond, Kings, Queens, Nassau, and Suffolk counties (New York Natural Heritage 2010). General reports of observations made prior to this include locations in Richmond and Suffolk counties, but information prior to the late 1990s is limited (Donnelly 2004). Therefore, any new location information on Rambur's Forktail in New York may reflect heightened interest in surveying for this species rather than a population increase or a range expansion (NYS DEC 2005).

Recent observations have been noted in Richmond, Kings, Queens, Nassau, and Suffolk counties in the late 1990s. Long-term information regarding population size is not available prior to the late 1990s (New York Natural Heritage Program 2010). Since observations are fairly recent, and the full extent and size of the populations have not been determined, long-term trends are unclear.

Any activity which might lead to water contamination or the alteration of natural hydrology could impact Rambur's Forktail populations (NYS DEC 2005). Such threats might include roadway and agricultural run-off, ditching and filling, eutrophication, changes in dissolved oxygen content, and development near their habitats (NYS DEC 2005). Groundwater withdrawal is a potential threat in lentic habitats, as are invasive plant species replacing native plants required for oviposition (New York Natural Heritage Program 2010). Both emergence rates and/or species ranges may shift for odonate species as a result of climate change (Kalkman et al. 2008).

Further research is needed to define the distribution and population size of the Rambur's Forktail. In addition, research is required to understand the habitat requirements and threats to this species, and to create appropriate management guidelines for its persistence in known locations (NYS DEC 2005).

New York is close to the northern extent of the Rambur's Forktail's range). It has been confirmed from Staten Island, Brooklyn, Queens, Nassau, and Suffolk counties since the 1990s (New York Natural Heritage Program 2010). Older records were from Staten Island and Suffolk county prior to the 1990s (Donnelly 1999). There is an unvouchered record from Cattaraugus County that should be explored with further survey effort.

Ischnura ramburii has been documented from northern South America northward through Central America and Islands in the Carribean, the Hawaiian Islands, and the southern United States eastward to the U.S. Atlantic coast and north to Maine (Donnelly 2004, Abbott 2010).

Ischnura ramburii males have green shoulder stripes on the tops of the thorax and pale green sides. The abdomen is black with pale rings. Abdominal segment 8 is usually all blue and blue is present on the sides of segments 9-10. Postocular spots are small, round, and blue. Females have three color forms: male-like, orange, and mature olive. The male-like form has more bluish tinting to pale areas than males, but is otherwise similarly patterned. The orange form has an orange thorax, no shoulder stripes, and a broad, black mid-dorsal (top) stripe. The base of the abdomen is orange in this form and the rest of the abdomen is black (Nikula et al. 2003). The mature olive form has an olive-sided thorax and abdominal segments 1 and 2 are mostly pale, with the rest of the segments black on top (Lam 2004).

New York records from the 1990s to present indicate a flight season from June 14 to September 2 (New York Natural Heritage Program 2010). An unvouchered observation was made on 9/14/2009 and older records indicate the species can be observed into October (Donnelly 1999). The species flies from June 8 through November 1 in New Jersey (Bangma & Barlow 2010).

The time of year you would expect to find Rambur's Forktail present and reproducing in New York.

Information for this guide was last updated on: January 4, 2019