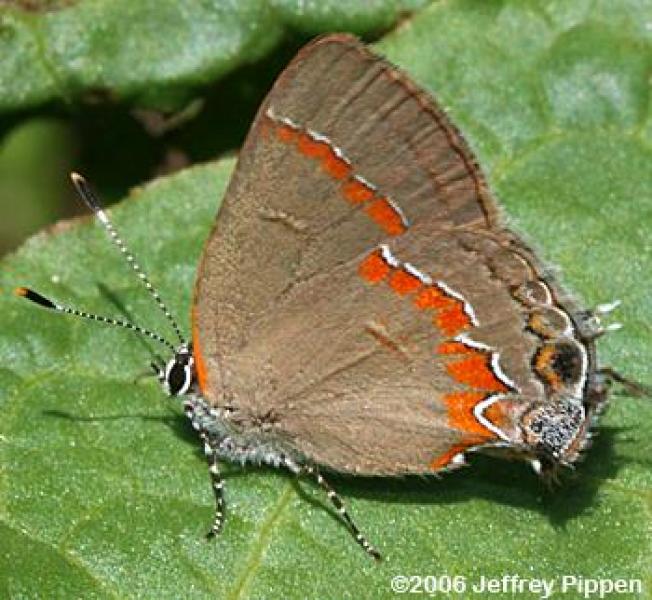 As with other hairstreaks, the tails and eyespots on the hind wings resemble a head. Movement of the tails is believed to attract a predator's attention away from the vital areas.

This species could be undergoing a slight range expansion in New York. It is sometimes found at relatively high abundance and it has been found at numerous locales along coastal New York. Because it appears to be a generalist, occupying heavily urbanized areas and feeding on a variety of common food sources in both the adult and caterpillar stage, threats to the viability of populations are unclear at this time. It is likely that this species will be removed from the active tracking list in the future.

Glassberg (1993) and Cech and Tudor (2005) stated that this species was expanding northward, and although it is sometimes reported in modest numbers around New York City (Fiore and Wallstrom 2003-2006), there does not appear to be a sustained ongoing range expansion farther north in New York in recent years and the current range is similar to that shown in Shapiro (1974).

Because this species seems to be expanding in New York, threats are unclear. In general, urbanization, habitat loss and insecticide spraying can threaten butterfly populations in metropolitan New York City (Matteson and Roberts 2010).

In general, management strategies for ruderal insects of heavily urbanized areas are not relevant (NatureServe 2009). Nevertheless, Matteson and Roberts (2010) suggested three conservation strategies for butterflies of metropolitan New York: 1) locate and promote conservation of early-successional habitats such as pine-oak barrens, wet meadows and serpentine and calcareous grasslands; 2) assess the status of host plants; and 3) population monitoring.

Very little is known of the biology and life history of this hairstreak, especially in the northern part of its range. Potential mechanisms of range expansion and population dynamics have not been addressed. Caterpillar detritus feeding is unique and deserves further study (Cech and Tudor 2005).

On Long Island these butterflies are primarily found in and around scrub oak forest and edges, but also in hammocks, fields, right of ways, brushland, and occasionally yards with foodplants. Adults are seen mostly in the open and on edges of scrub oak forest but can be encountered in shadier situations in hotter weather. Adults commonly visit gardens (NatureServe 2009). This hairstreak is most common in successional old fields with thick vegetation and in hammocks behind coastal dunes (Opler and Krizek 1984).

This species is primarily found along the coast from Staten Island east to central Suffolk County, rarely inland to Rockland and Westchester Counties. This forms the extreme northeastern range extent of this northern representative of a tropical group of hairstreaks.

Kansas and Texas east to Long Island and south to Florida. It is most common on the southeastern coastal plain.

The undersurface of the wings is gray-brown with a postmedial white line edged with a bright orange to red-orange band. Each hind wing has two tails (hairstreaks) with a relatively large conspicuous eyespot on the wing margin between the bases of the tails and the wingspan of the adult is about 1.0". Caterpillars are brown with a median dorsal longitudinal stripe and are covered with short hairs (Hall and Butler 2010).

Males perch on shrubs and small trees watching for females. Females lay eggs singly on the underside of fallen leaves near the host plant. Caterpillars feed on leaves and buds and detritus (Cech and Tudor 2005). Chrysalids and fourth-stage caterpillars hibernate. Newly emerged individuals occasionally sip moisture from puddles on trails (Opler and Krizek 1984).

Shapiro (1974) reported the species to be double brooded on Staten Island, with a flight season from July through October while Glassberg (1993) provided data from the New York City area on two flight periods: early May to late June and late July through October. Sightings from Fiore and Wallstrom (2003-2006) are also in line with Glassberg's flight seasons. Individuals remain active throughout the day, but late afternoon is the period of greatest activity (Cech and Tudor 2005).

The time of year you would expect to find Red-banded Hairstreak present and active in New York.

Matteson, K.C., and N. Roberts. 2010. Diversity and conservation of butterflies in the New York City Metropolitan area. Cities and the Environment 3(1):poster 18.

Information for this guide was last updated on: July 6, 2011