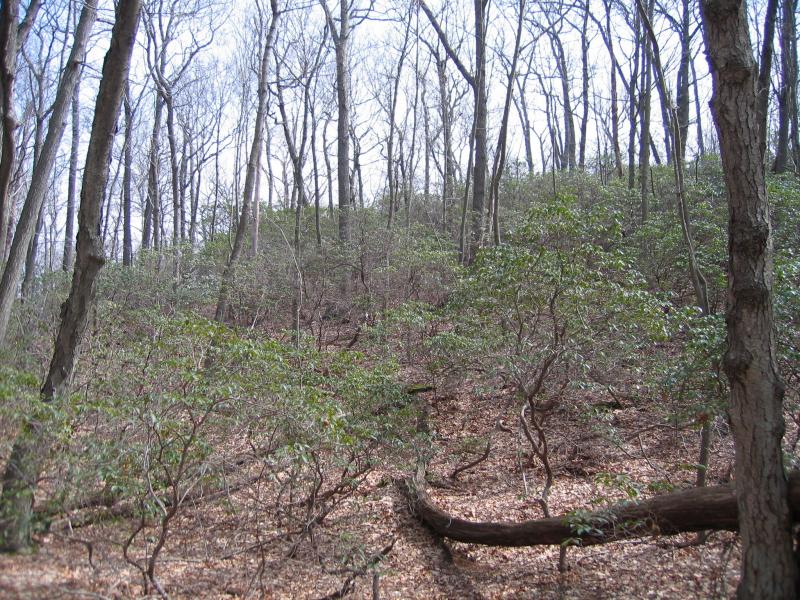 The genus of mountain laurel, Kalmia, was named by Carolus Linneaus in honor of one of his students, Swedish botanist Pehr Kalm. Kalm began his botanical career in Sweden and traveled extensively doing field research. Kalm kept a journal during his time in North America that continues to be an important source of information on early life in the colonies.

There are an estimated 5 to 50 extant occurrences statewide. There are few currently documented occurrences, but they have good viability and are protected on public conservation land. The community is restricted to interior portions of the Coastal Lowlands ecozone in New York in Suffolk County and is concentrated on knolls and mid to upper slopes of moraines. The acreage, extent, and condition of coastal oak-laurel forests in New York is suspected to be declining. They are vulnerable to fragmentation and extirpation by continued residential development. Heavy deer browse and exotic species invasion are additional threats.

The acreage, extent, and condition of coastal oak-laurel forests in New York is suspected to be declining, primarily due to fragmentation and extirpation from residential development, heavy deer browse, and exotic species invasion.

The number, extent, and viability of coastal oak-laurel forests in New York are suspected to have declined substantially over the long-term. These declines are likely correlated with coastal development and associated changes in landscape connectivity.

To promote a dynamic forest mosaic, allow natural processes, including gap formation from blowdowns and tree mortality as well as in-place decomposition of fallen coarse woody debris and standing snags, to operate, particularly in mature and old growth examples (Spies and Turner 1999). Management efforts should focus on the control or local eradication of invasive exotic plants and the reduction of white-tailed deer densities. Consider deer exclosures or population management, particularly if studies confirm that canopy species recruitment is being affected by heavy browse. Generally, management should focus on activities that help maintain regeneration of the species associated with this community. Deer have been shown to have negative effects on forest understories (Miller et al. 1992, Augustine and French 1998, Knight 2003) and management efforts should strive to ensure that tree and shrub seedlings are not so heavily browsed that they cannot replace overstory trees. If active forestry must occur, use silvicultural techniques and extended rotation intervals that promote regeneration of a diversity of canopy, subcanopy, and shrub species over time (Busby et al. 2009) while avoiding or minimizing both short-term and persistent residual disturbances such as soil compaction, loss of canopy cover due to logging road construction, and the unintended introduction of invasive exotic plants.

Surveys for additional large examples are needed. Priority focus areas are the eastern half of the Ronkonkoma Moraine and the western part of the Harbor Hill Moraine. Primary leads include Long Pond Greenbelt and Culloden Point. Other leads include sites mentioned in Greller (1977): Cold Spring Hills, Manetto Hills and Dix Hills. More data on associated species is needed. Additional surveys of the occurrences on the morainal hills of western Long Island (NW Suffolk County and NE Nassau County) are needed to confirm their identity.

A critical assessment of the long-term effects of heavy deer browse on this community, particularly addressing oak and other canopy species seedling recruitment, is needed. An investigation of the correlation between Kalmia latifolia and Quercus coccinea abundance is also needed.

Restricted to interior portions of the Coastal Lowlands ecozone in New York in Suffolk County; concentrated on knolls and mid to upper slopes of moraines. Known examples range from Hither Hills west possibly to the morainal hills of northwestern Suffolk County. Several examples occur along the eastern half of the Ronkonkoma Moraine. The community range possibly extends westward into eastern Nassau County on the end moraine of western Long Island.

The distribution of this type is centered in New Jersey and Long Island, New York, with known occurrences also present in New Hampshire and Delaware. It may also occur in surrounding states (NatureServe 2009).

A large patch low diversity hardwood forest with broadleaf canopy and evergreen subcanopy that typically occurs on dry well-drained, sandy and gravelly soils of morainal hills of the Atlantic Coastal Plain. This forest is similar to the chestnut oak forest of the Appalachian Mountains; it is distinguished by lower abundance of chestnut oak (Quercus montana) and absence of red oak (Quercus rubra), probably correlated with the difference between the sand and gravel of glacial moraines versus the bedrock of mountains. Coastal oak-laurel forest is often associated with coastal oak-heath forest, forming a forest complex on morainal hills.

Known examples of this community have been found at elevations between 30 feet and 220 feet.

Late spring is probably the best time to see this forest since this is the time when mountain laurel showcases its beautiful white/pale pink floral display. 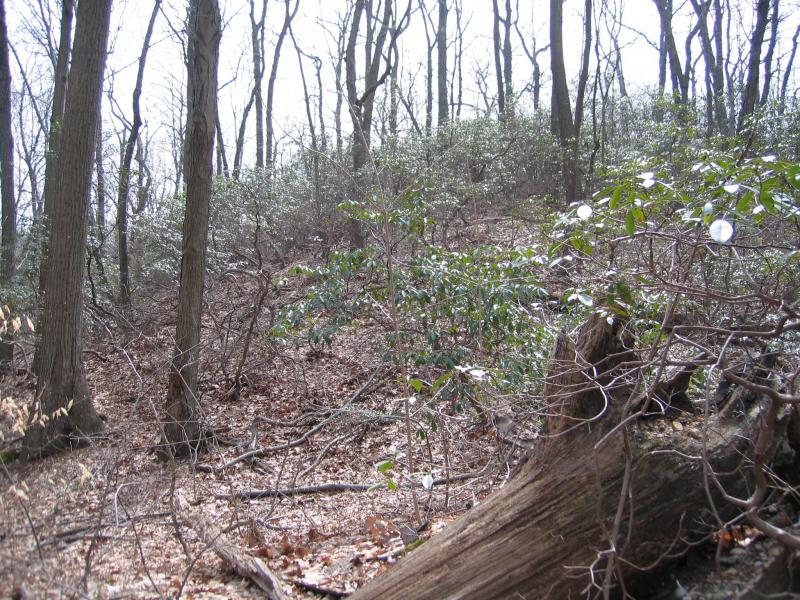 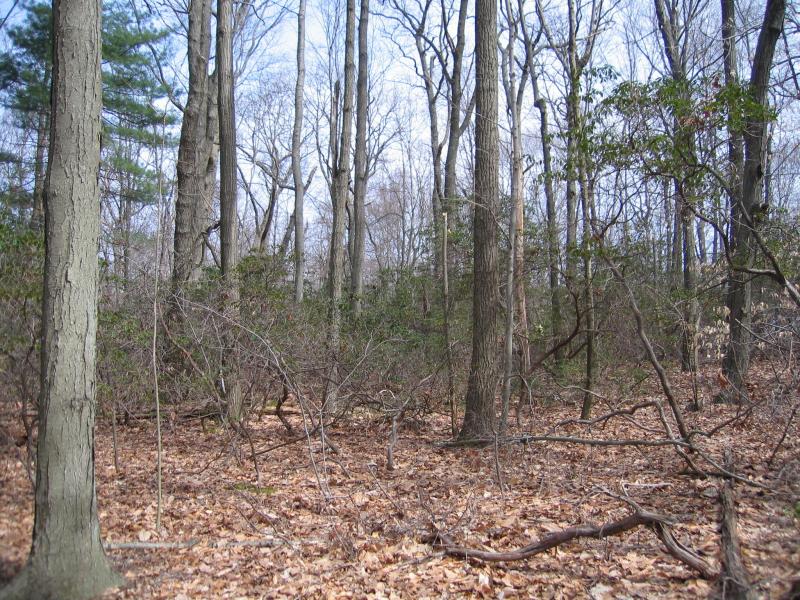 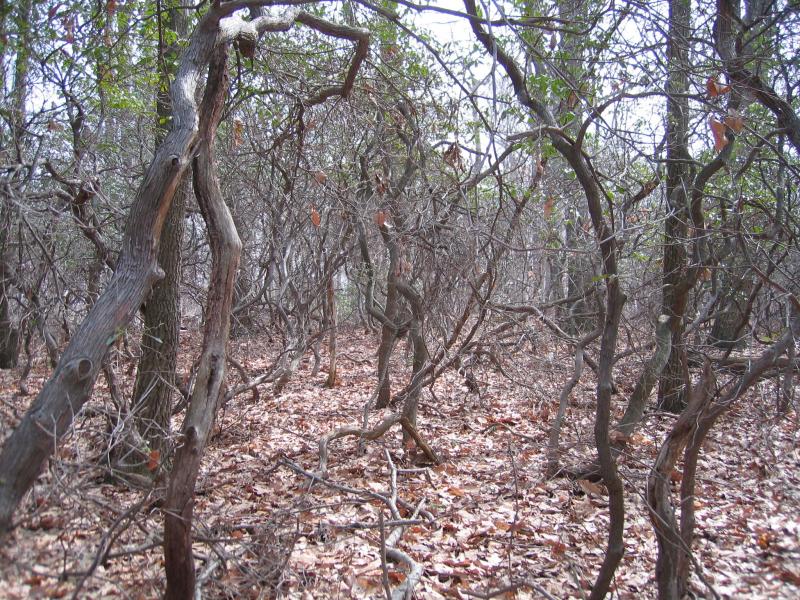 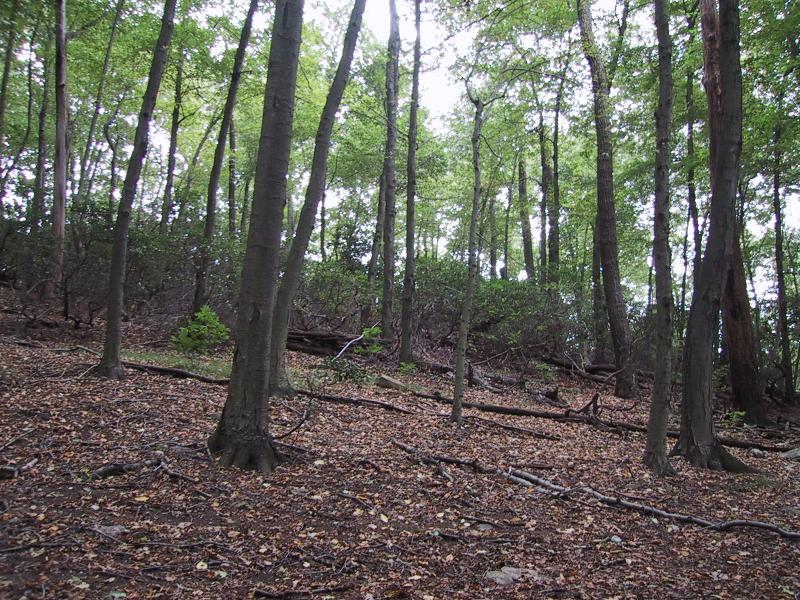 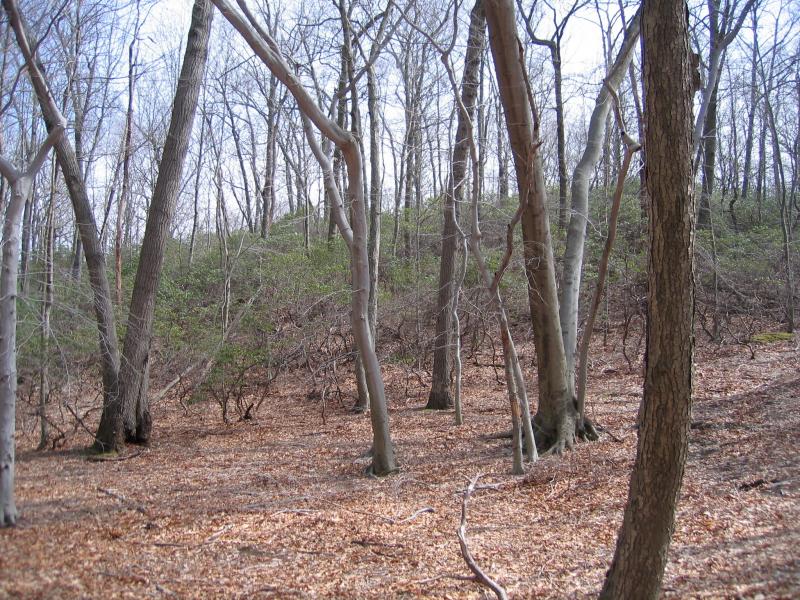 This figure helps visualize the structure and "look" or "feel" of a typical Coastal Oak-Laurel Forest. Each bar represents the amount of "coverage" for all the species growing at that height. Because layers overlap (shrubs may grow under trees, for example), the shaded regions can add up to more than 100%.