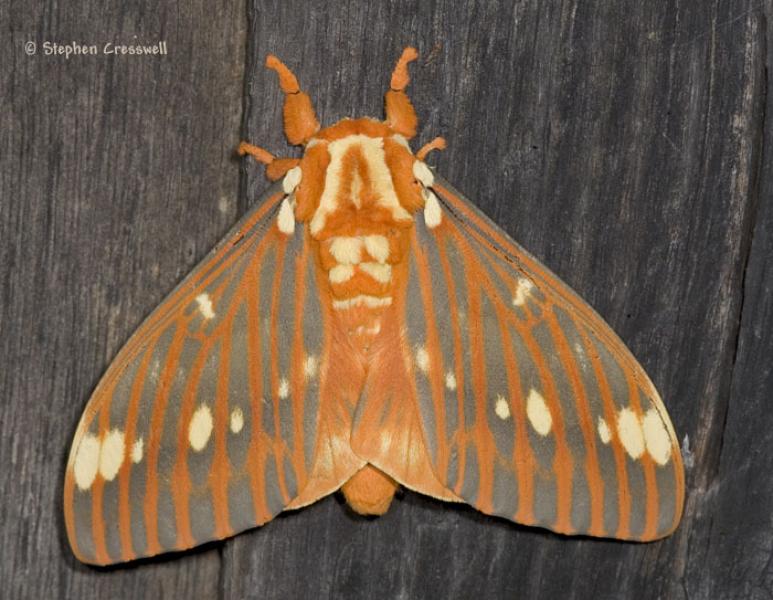 The short-term trend for this species in New York State seems to be increasing. Regal moths were extirpated from New York in the 1950s, but recently appear to be re-establishing, particularly on Long Island (NatureServe 2017, New York Natural Heritage Program 2017).

The long-term trend for this species is decreasing. Regal moths once occurred throughout much of New York (NatureServe 2017), but after being extirpated in the 1950s, it has been recorded only from Long Island and the mid-Hudson region of New York State (The Lepidopterists’ Society 2015).

Two main threats led to the extirpation of the regal moth from New York State: chemical spraying to control spongy moths, and the spongy moth biocontrol fly Compsilura concinnata. Most Lepidoptera are negatively impacted by the chemicals used in spongy moth sprays, and historically the use of these chemicals led to the extirpation of the regal moth (Butler et al. 1995, NatureServe 2017). Compsilura concinnata was introduced as a way to control spongy moth populations in the United States in 1906, but was found also to parasitize moths of Saturniidae as well as other native species. It is believed that C. concinnata is one of the reasons that regal moths had difficulty recovering after spraying when DDT was discontinued (NatureServe 2017). It is also suspected by some Lepidopterists that regal moths are negatively affected by artificial light.

This species is sensitive to chemical spraying (e.g., with Dimilin), and so broadcast use of these chemicals in their habitat should be avoided (NatureServe 2017). If chemical spraying is necessary to eradicate target species (e.g., sp ongymoths), Bacillus thuringiensis (Btk) is an alternative. Btk is used in the spring to target spongy moth caterpillars, and it does not persist in the environment long enough to significantly impact summer feeding caterpillar species, such as regal moth caterpillars (Schweitzer et al. 2011). Two other spongy moth biocontrols that appear to be very effective at eliminating spongy moths without impacting non-target species, yet are not currently available commercially, are Gypchek (a viral preparation) and Entomophaga maimaiga (a fungus). It is also possible this species is negatively impacted by artificial lighting, and so steps should be taken to minimize lighting at night. Any necessary artificial lighting should use lamps that emit yellow or red light, because these have a lower impact on moth species (Schweitzer et al. 2011). The lamps that have the least effect on moth populations are low pressure sodium lamps, and these should be used whenever possible.

One of the most important research needs for this species is more current and complete data regarding species status and distribution. Regal moth populations would benefit from statewide survey and monitoring efforts in suitable habitat.

This species is known from Long Island, and there is one known record from Ulster County (The Lepidopterists’ Society 2015, New York Natural Heritage Program, 2017).

This species is currently known from southern New York, central New Jersey and southern Pennsylvania west to Illinois, and south to eastern Texas and across the Gulf of Mexico to central Florida (NatureServe 2017).

This is a large moth, with a wingspan of 9.5-15.5 cm (Covell 1984). The forewings are gray, with yellow spots and orange veins. The thorax is orange with yellow lateral stripes (Beadle and Leckie 2012). The caterpillars are 12.5 to 14 cm long when fully grown. They can vary in color, but usually are blue-green and have an orange head (Hall 2014). Caterpillars have orange scoli with black tips on the second and third thoracic segments, and four short, black scoli on each abdominal segment.

Size and coloration of both adults and larvae.

Adult regal moths emerge during summer evenings and mate the following evening (Hall 2014). Females then begin laying eggs at dusk on the third day. Eggs hatch in 6 to 10 days, and larvae can be found through late summer. Larvae burrow into soil and remain there as pupae to overwinter before emerging from the soil as an adult the next summer. Larvae are often spotted when they come down from their host trees to find a spot to burrow into the soil.

The time of year you would expect to find Regal Moth present, active, reproducing, larvae present and active, eggs present outside adult, and pupae or prepupae present in New York. 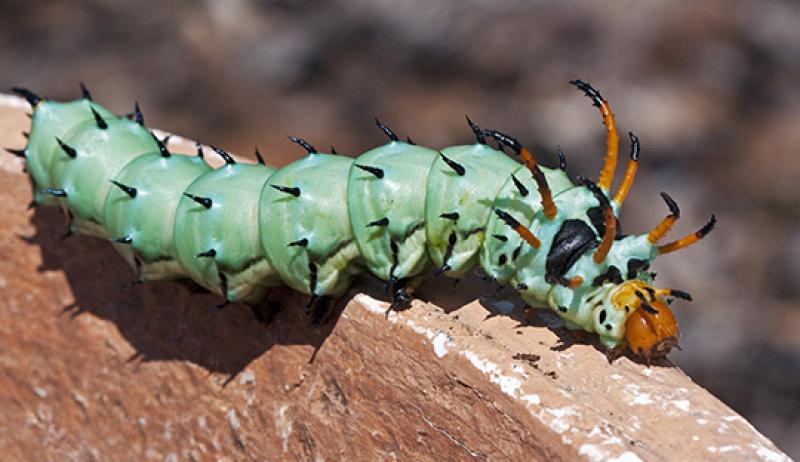 Information for this guide was last updated on: June 29, 2017