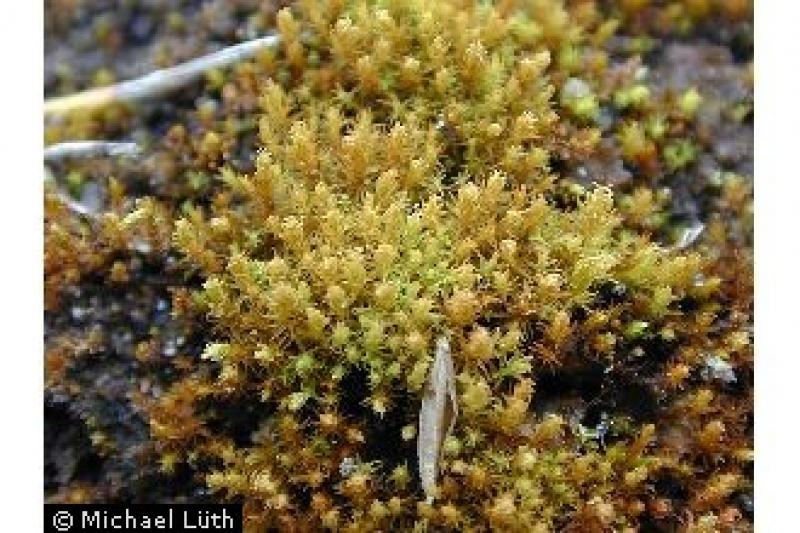 Dr. Richard Zander, former curator of the Clinton Herbarium in Buffalo, used this moss to experiment with the change in color of moss leaves exposed to acids and bases. The acid-base color reaction is one of the only ways to distinguish this moss from the very similar moss Triquetriella californica (Zander 1980).

The rank is designated based on Cleavitt et al.'s (2006) report. Four specimens were verified. The last collection was made in 2005.

The short term trend is unknown. Four verified sites were documented in 2005 but counts were not available from these surveys. No subsequent visits have been made to confirm the stability of these populations

The long term trend appears positive there are four extant sites and no sites have been documented as lost or historical in New York.

Over collection and human disturbance to plants growing on accessible cliff faces and talus slopes could be threats.

Montior the impact of visitation and human disturbance to populations on accessible cliff faces and talus slopes.

The collection and analysis of specific microhabitat data for the immediate areas where these mosses are growing would aid in developing a better understanding of its habitat. Surveys documenting the nonvascular and vascular plant species growing in immediate association with this species in New York are needed.

In New York this species has been collected from ledges, cliffs, and talus slopes associated with limestone (NYNHP 2012). Wet, calcareous soil, rock outcrops, ledges (including concrete walls) (FNA 2007b).

In New York, this moss has been found at disjunct upstate locations in Erie, Madison, and Tompkins counties.

Rusty beard-moss has a global distribution in the northern hemisphere ranging from Central America, Mexico and the West Indies to Africa, Europe, Asia and north Africa to Greenland and Canada aside from Prince Edward Island, Quebec, Saskatchewan and Nova Scotia. In the United States it is primarily a northern species occuring in Alaska, Vermont, New York, Michigan, Montana, Colorado Illinois, New Mexico, North Carolina, Virginia, West Virginia and Arkansas.

Didymodon ferrugineous grows in patches or loose tufts with stems reaching up to 2.5 cm in length. It usually has red-brown shoots tipped with green. The stem leaves vary from appressed to spreading when dry, but are strongly recurved and keeled when moist. They show little or no variation in morphology (monomorphic), are egg-shaped -triangular to -lanceolate, grooved along the midrib (costa) on their upper surface (adaxially), and 0.8--2 mm long. The leaf bases are scarcely differentiated in shape to egg-shaped, margins nearly flat (plane) to recurved at midleaf, usually entire, with a broadly acute but not fragile tip. The costa extends to or slightly beyond the leaf tip (percurrent to short-excurrent), is weakly tapering and not much wider at the base, costal cells are elongate on the upper leaf surface, 2 to 4 cells wide at midleaf, guide cells in 1 layer; basal leaf (laminal) cells little differentiated, quadrate or very short-rectangular, walls thickened; laminal cells 11 to 15 µm wide, roughly square, papillae usually present, simple, often large and sharp with 1 to 3 centered over angular lumens, lumens that have irregularly thickened walls that are convex on both sides and 1 layered. The capsule is 0.7 to 1.5 mm long and borne on a 0.6 to 1.2 cm long stalk (seta). The inside the capsule mouth bears a fragile circle of 16 tiny (275 to 600 µm), linear teeth (peristome), that are cleft to near the base, and nearly straight to twisted counterclockwise once. These may often appear missing. The spores are 7 to 9 µm in diameter.

This species may be identified from vegetative material (the gametophyte stage).

Didymodon ferrugineus can be distinguished from the other New York species, D rigidulus var. rigidulus, by its the strongly recurved and keeled moist leaves and absence of gemmae in its leaf axils. D. rigidulus typically has axillary gemmae and it leafs are only spreading when moist. Barbula spp can also be distinguished by the presence of axillary gemmae, and typically very papillose, blunt leaves. In contrast, D. ferrugineus' leaves are weakly papillose, broadly acute and lack axillary gemmae. Gymnostomum aeruginosum plants are light to dark green and lack a ring of teeth (peristome) inside the capsule mouth, while D. ferrugineus is usually red-brown with green tips and its capsule has a well developed peristome bearing 16 teeth.

The gametophyte (vegetative) form of this moss may be seen throughout the year. The sporophyte (reproductive) form of this moss is rare, when present capsules mature winter-spring. For positive identification a small piece of the plant including the entire stem, with leaves and intact capsules (if present) is ideal. The species can generally be identified in vegetative condition using the stem and leaf characters.

The time of year you would expect to find Rusty Beard-moss vegetative and fruiting in New York.