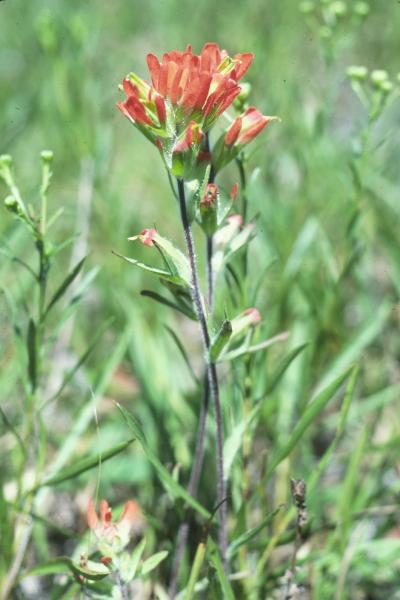 Castilleja coccinea was first described as a new species in 1737 by Linnaeus who placed it in the genus Bartsia. It was later transferred to the genus Euchroma in 1818 and finally to the genus Castilleja in 1825. The genus Castilleja was named for Domingo Castillejo, Spanish botanist and Professor of Botany in Cadiz, Spain, in 1782 by Jose Celestino Mutis in Linnaeus' son's book Supplementum Plantarum. The moving around does not stop there as the genus Castilleja has recently been transferred with other hemiparasitic members of the family Scrophulariaceae into the family Orobanchaceae. Even though it may be difficult to grow because of its need for certain host plants the seeds are available through various wildflower nurseries.

There are two large and three small populations and all of them are threatened in the long term by invasive species and habitat succession. There are 20-30 historical occurrences mostly from the 1880s through the 1920s.

At the two large sites in the state the plants are remaining stable. The three smaller sites have not been resurveyed and their status is unknown.

This species was most common in New York from the 1880s through the 1920s when there was much more open prairie-like habitat that has since regrown to forest or has been developed and farmed. The populations have declined substantially since then and will likely remain in low numbers.

There are no immediate threats to the larger populations but in the long term the invasive black swallowwort may threaten their open limestone habitats. The small populations in Dutchess County and St. Lawrence County may be threatened by succession of their open habitats or by destruction by ATVs.

Prevent the invasion of black swallowwort.

Research could be done into the feasibility of augmenting existing populations.

In New York Scarlet Indian-paintbrush is found on open, usually calcareous sites, including on limestone bedrock in alvar grasslands, an old field at the edge of a fen, and a mowed right-of-way on a sandy logging road (New York Natural Heritage Program 2007). A rare native on the barrens of the northern Lake Plains only; also escaping cultivation widely elsewhere in NY (Mitchell and Tucker 1997). Meadows, moist prairies, and damp sandy soil (Gleason and Cronquist 1991). Peaty meadows, prairies and damp sands and gravels (Fernald 1970).

In New York this species is found in Western New York on the Lake Erie and Lake Ontario Plains, as well as in the Lower Hudson Valley.

Scarlet Indian-paintbrush is known from Nova Scotia and Maine in the northeast, west as far as Saskatchewan and Minnesota, and through all the southern states to Florida, reaching its western limits in Louisiana, Oklahoma, and Kansas.

This species is an annual or biennial wildflower with short (20-60cm) finely hairy stems. The common name refers to the flower bracts, which look as if they were dipped in scarlet paint, and are divided into 3 to 5 scarlet-tipped lobes. The actual flowers are a much less conspicuous pale yellow, 17-25mm long, and often at least partially obscured by the scarlet bracts and calyx.

Stems with flowers or fruits are best for identification, though since many populations are small it is better to take a photograph than a specimen.

There are no other species of Castilleja in the state, and our species is distinctive. However, some populations may represent escapes from garden cultivation or roadside seed mixes.

This species may display its conspicuous red flowers from May through July; fruits persist through the summer.

The time of year you would expect to find Indian Paintbrush flowering and fruiting in New York.